Amish in Manitoba – A Closer Look

“My way of thinking is keeping it in the centre is the right path. One extreme is as bad as the other.” That’s Amishman Chris Hershberger, in a new CBC story on the Amish in Manitoba. 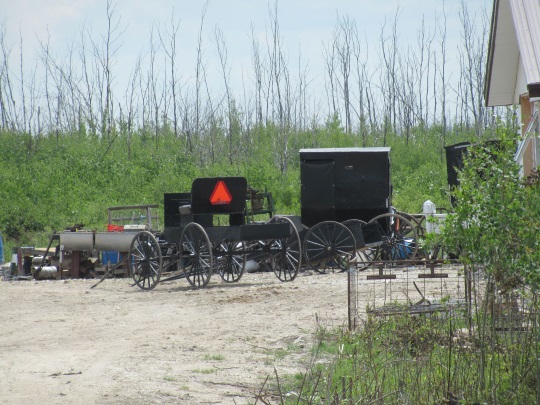 Amish have in the past several years expanded beyond Ontario, which had been the only province where they were found for (almost) all of their nearly two centuries in Canada.

The CBC article on the Keystone Province community includes comments from Amish, as well as the response of locals to the Amish settling there.

The main Amish contributor here is 30-year-old Edward Miller, who shares why and how they came. The story is a familiar one:

Back in his parent’s community near London, Ont., most of the families made a living making various products to sell, but Miller wanted a different life.

“We kind of thought it was good for the young people to work on a farm, because in a shop, the father isn’t at home as much with the children,” he said. “If the children want to be out there [in the fields] with Dad, that seems to work good.”

The land Miller and the other Amish purchased has never been farmed, so they have spent the past summer weeding, clearing brush and pulling out boulders, all without the aid of machines.

Miller’s parents wanted his family to stay in Ontario, but he says land prices made purchasing a farm impossible.

“They weren’t really too happy. We didn’t really want to [move away], but there was no way we could farm back there. Any farm would cost you a million dollars.”

The families live on properties scattered over about 10 square kilometres. They started looking for property in the area about two years ago, when Penner said a group of Amish showed up on his doorstep.

Penner is Edward Penner, local municipality councillor, who helped the Amish to move to the area.

The article includes a nice handful of photos from the settlement, and as you might suppose from Chris Hershberger’s quote above this is not the plainest of Amish groups but likely somewhere in the center/centre, as they use the SMV safety triangle, and implements like the refrigerator and freezer.

The piece also draws a distinction between the Amish and Old Order Mennonites. Old Order (or “Team”) Mennonites actually outnumber the Amish in Canada.

In fact, a Canadian friend recently related a humorous story to me about how Amish are called Mennonites in Ontario. Both groups dress plainly (though differently) and use horse-drawn buggies, so people mixing them up is not uncommon.

The locals seem to have been welcoming, and overall like having the Amish around, despite some complaints about horse manure on the roads. The story opens with an image of locals crowding to windows to catch sight of passing buggies.

They also put up buggy warning signs well in advance of the first Amish arrivals, and installed hitching posts in the town of Vita. Edward Miller says all the people they’ve met in town “were good as pie.”

I visited a settlement in New York last week where this was the case as well – signs up before the Amish had even gotten there. That’s a good sign, pun intended. 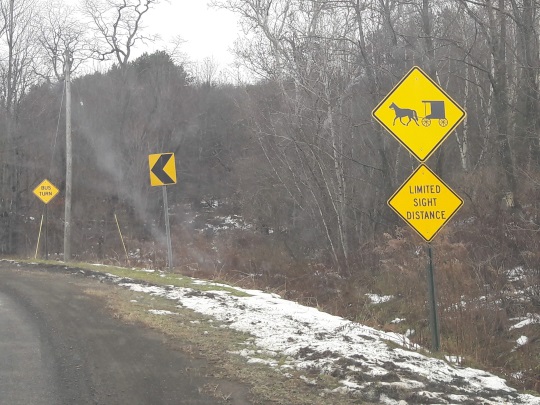 Here’s one last detail I found interesting, on how Edward plans to deal with the frigid winter season:

Before then, the families already here will have to survive their first winter on the Prairies. By placing their water tank in the loft above their chickens, Miller hopes their body heat combined with the force of gravity will keep their water from freezing.

“I don’t know what’s going to happen when it goes down to minus 40,” he said.

I get the chickens, but does the force of gravity help prevent freezing?