A Visit to Amish Indiana in 25 Photos

Since getting back from northern Indiana Monday night, I’ve been thinking about ways to share my trip with you.

I usually return from these Amish journeys with a jumble of thoughts and photos…some of them become posts and some just sort of evaporate.

In the interest of capturing as much of that as possible, I thought I’d just share a bunch of photos I took, with a little narration to go along with each.  These photos are from the Elkhart-Lagrange community, unless otherwise noted.

So consider this a guided tour of what I did last week, with me jumping around a bit between days and communities as I give you a little stream of consciousness on what’s going on in the photos. Here we go. 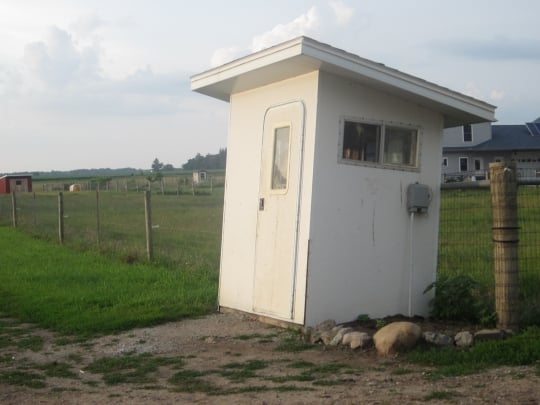 First we’re going to look at some phone shanties.  This one looks a little unsteady. Or maybe just taking it easy. 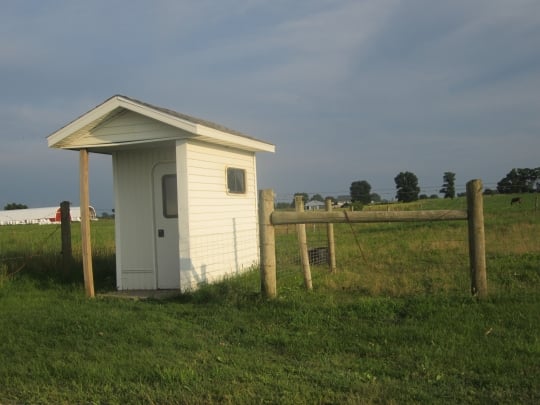 As does this one.  Or this may just be the angle I’m shooting.  The Lagrange settlement seems to have a lot of phone shanties, small buildings containing a phone, separated from the home or business.  Some are shared and some are single-family.  The idea is to have phone access nearby, but not inside or too close to the home.

The structure houses a telephone, a stool, a phone book, and there are probably some notes and numbers scribbled here and there inside. Actually some of these get to be pretty big, maybe there is more in there than I’m aware of.

In comparison I think in much of Lancaster County the phone has moved closer to the home and into businesses and buildings.  You don’t see so many phone shanties there, though they are supposed to be more common in the more traditional southern end of the community.

I have wondered for a while now if Amish will ever install computer shanties with regulated internet access, away from the home and shared between a number of families or Amish businesses.  It seems it would provide a limited measure of access for businesses, but take it (safely?) away from the home.  Could it happen one day? 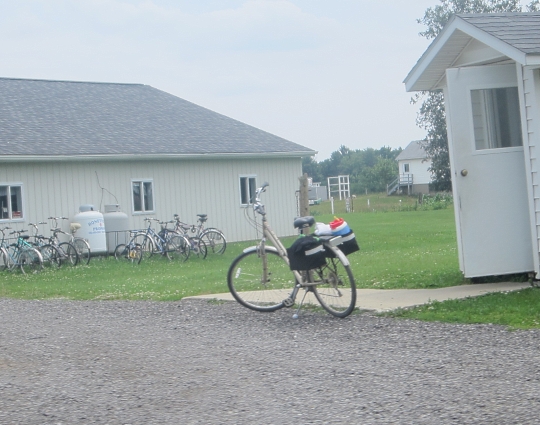 This one was occupied, at least that’s what the fully-loaded bike parked outside tells us. You’re seeing bikes in the background because this photo was taken outside of Hawpatch Bicycle.

Biking is accepted and ever-popular in this community.  It’s a way that men travel to factories and families enjoy recreation on warm summer evenings.  You see some pretty nice bikes in this settlement.  Walking through the town of Topeka on Saturday morning, they were parked everywhere as Amish folks went about their business. 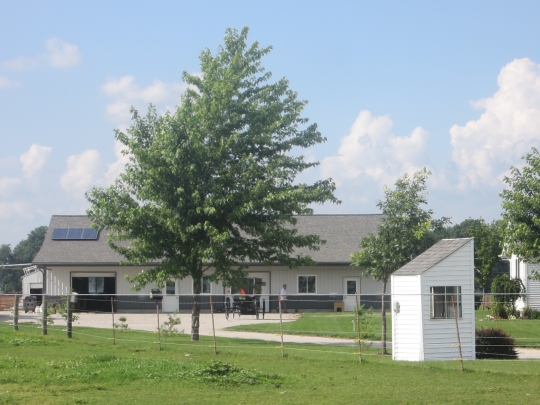 One more phone shot, with some solar panels on the roof of the garage.  Solar panels continue to propagate throughout Amish communities, with a lot of them in northern Indiana in the Elkhart-Lagrange, Nappanee, and Allen County communities. And when I was in Ohio last Sunday I noticed that Ivan Miller had them attached halfway up his windmill. Sort of ruins the windmill aesthetic, but the spot was a good one for catching rays. 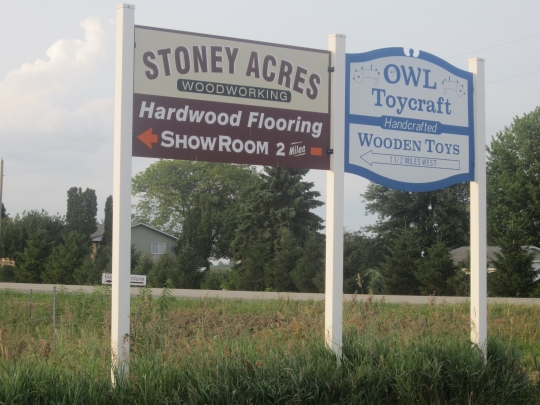 I visited quite a few Amish-owned businesses while in the area, including Lehman Enterprises, Kountry Wood, Pathway Bookstore, Miller Engine Repair, and Quality Hardwood Sales.

These signs are on a side road off of Highway 5, the north-south route that takes you down from Shipshewana, near Topeka and then on towards Ligonier.  I remember dropping in on the OWL Toycraft place when I was selling books here in 2006.  I can’t remember for sure whether he bought books or not, I don’t think he did.  Neat shop though. 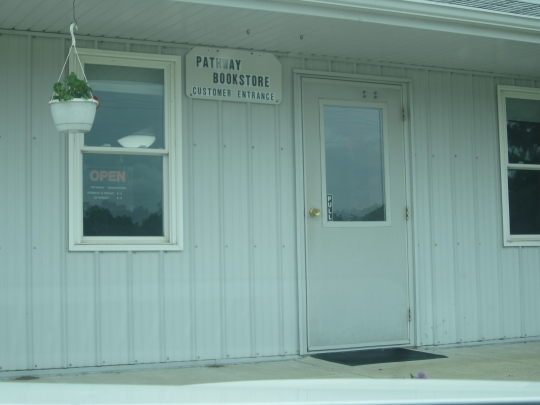 Here is the front of Pathway Bookstore.  I arrived to a completely empty shop, and had to fetch someone from the home, the first house south of the shop, as it was lunch hour.  That’s what the sign left on the counter told me to do.  She was just finishing up and about to head over when I knocked on the door.  I got a book on Amish schoolteachers in Mexico.

Pathway Publishing, who produce Family Life and quite a few other things, is based in Aylmer, Ontario.  Lagrange County has been home to their stateside presence for, well, a pretty long time I think (am sprawled out on the floor and too comfortable to look up dates tonight, sorry folks 🙂 ). 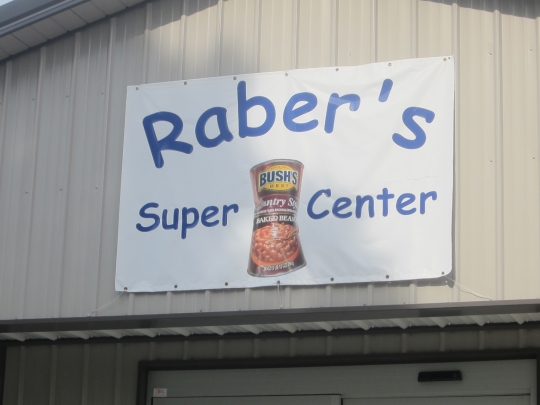 Sticking with the business theme for a moment more, on Friday I took a little drive from Nappanee to the small community at Rochester, about an hour south.  This business, unfortunately, was closed when I arrive.  Looks like an elephant sat on that can of beans there.

I only saw a couple of Amish homes in the Rochester settlement, but I believe I passed through an Old Order Mennonite community about halfway between Nappanee and Rochester.  There was a buggy parked outside the home, but the mailbox said “Martin”. 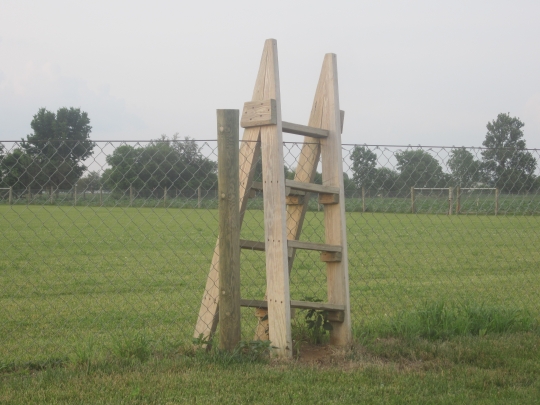 Lagrange settlement again.  On the other side of this fence is a baseball field.  Pretty handy ladder if a ball gets away.  You see them on fences near schools, though this one belonged to what looked to be a ball field unattached to a school, just carved out of someone’s farmland. 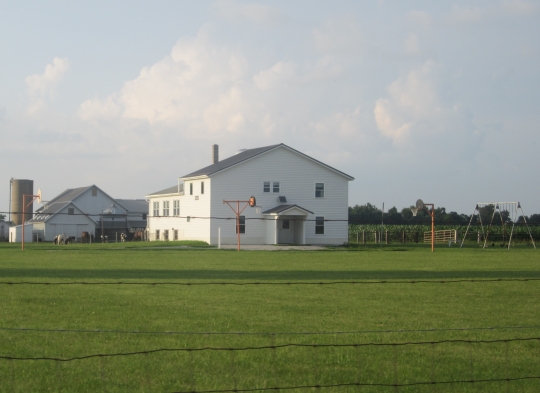 Pretty big for an Amish school.  Not a bad playground either. 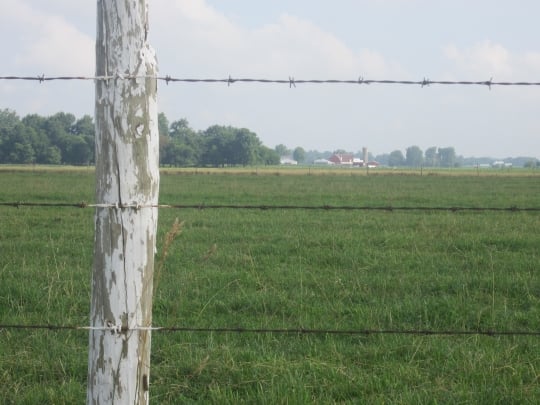 Lot of nice views across fields like in this photo, and the next.  The terrain in the Lagrange community is generally pretty flat, though there are hilly pockets throughout the settlement. 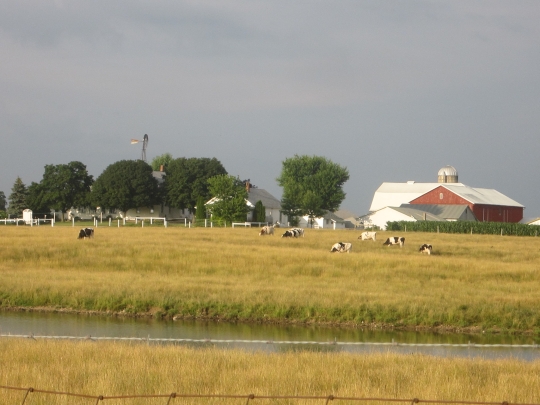 This may have come out the best of all the photos I took. 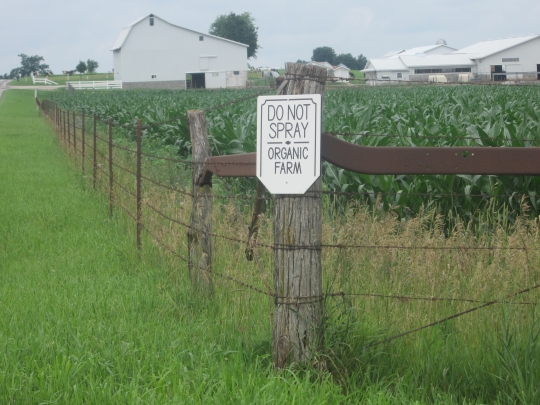 You’ll see these signs here and there in the Lagrange settlement.  I like the lettering. 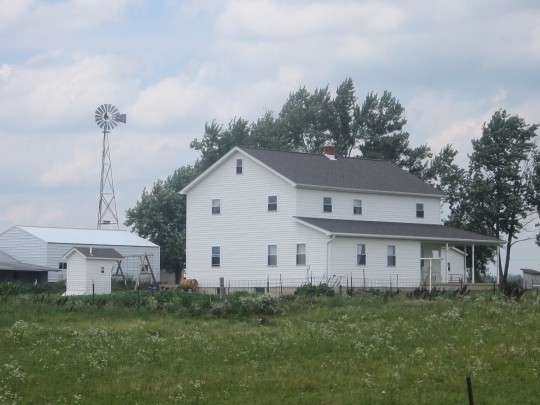 Let’s leave Lagrange-Elkhart behind for a brief look at the Swiss Amish community in Adams and Jay Counties.   Homes are plainer here, as are the Amish in general. 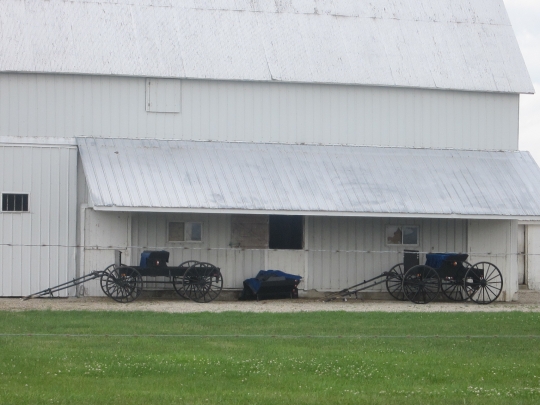 Since Swiss buggies are uncovered, you need to watch where you park them, especially if grey skies threaten. 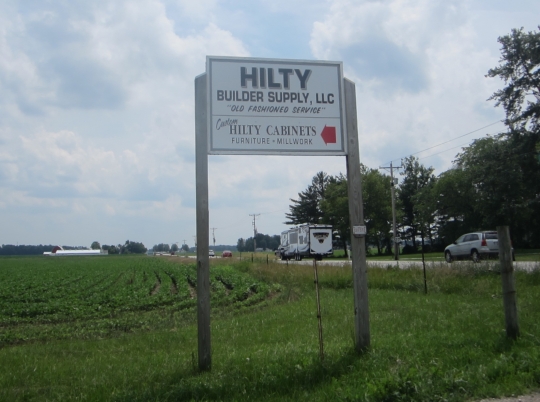 Hilty Builder Supply and Hilty Cabinets.  “‘Hilty” is a fairly common last name among the Adams County Swiss.  What’s that I see below the sign? 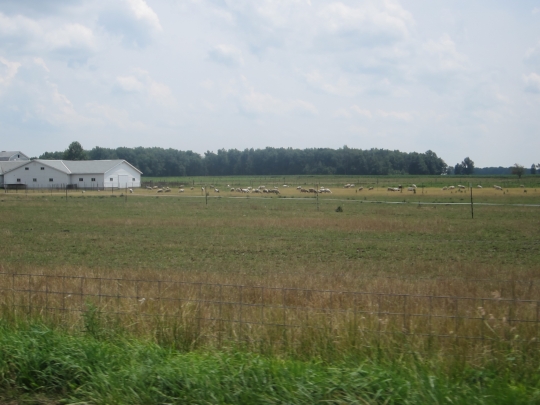 Sheep being sheepish in an Adams County field. 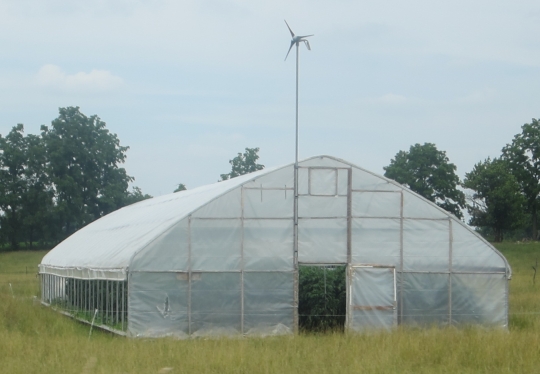 Back to Lagrange.  This small greenhouse is full of tomato plants I believe.  If it needs to, it can turn that rotor horizontal and take off (a little-known Amish invention).  Okay maybe my imagination is getting ahead of me. 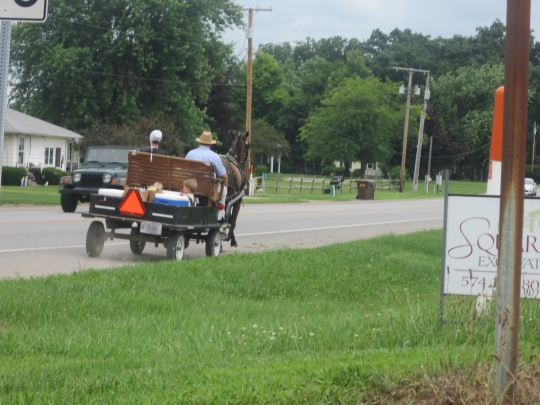 I took this photo waiting at a stop north of Shipshewana.  Looks like there might be a picnic in the back there. 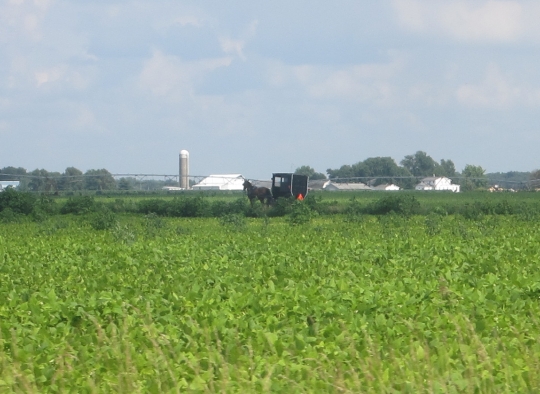 Another Amish vehicle heading down the road.  I didn’t take any night shots, but I think the Amish in Elkhart-Lagrange have some of the most interesting and attention-getting lights.  They have, among other things, the blinking SMV triangle. Also, and I’m pretty sure this was a youth buggy, an unbroken strip of white and red lights going around the top of the buggy.  In other words these are the polar opposite of Swartzentruber carriages, at least as far as Amish vehicles go. 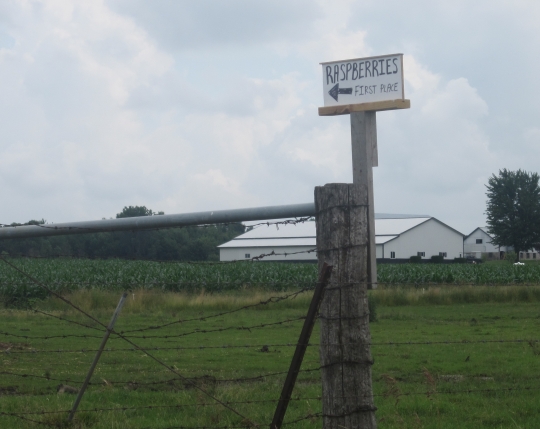 I mentioned the owner of this burgeoning fruit business in my last post on Amish and RV factories.  He works in one but assembles wooden clock faces and grows raspberries on the side. 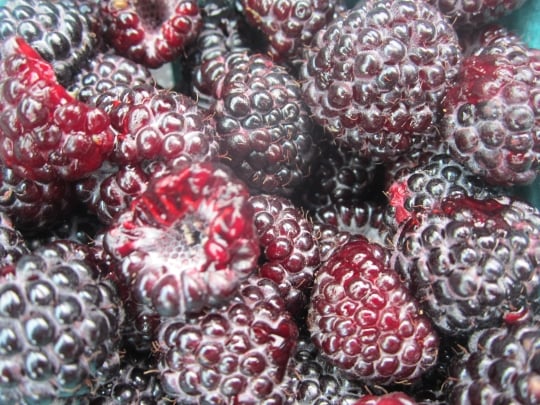 And here they are.  He said they were very good this year, but that they may be a little soft and to keep an eye out for worms.  I did, and they were good (the berries, not the worms–did not taste any of those).  They are not certified organic, but he said something about not using chemicals.  He was pretty enthused about it all. 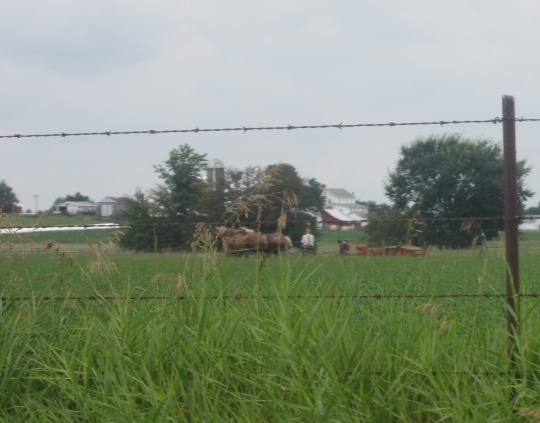 Not everyone works in factories in northern Indiana.  Not all the time, at least. 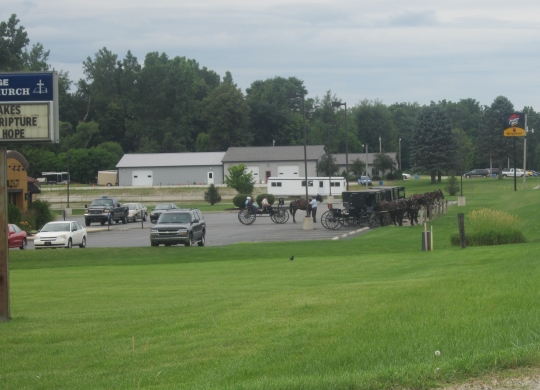 Whenever I drive through the town of Lagrange, I look to see how many Amish buggies are lined up outside of Pizza Hut. Doesn’t look like there was much room on the hitching pole Saturday night.  These folks were just pulling out. 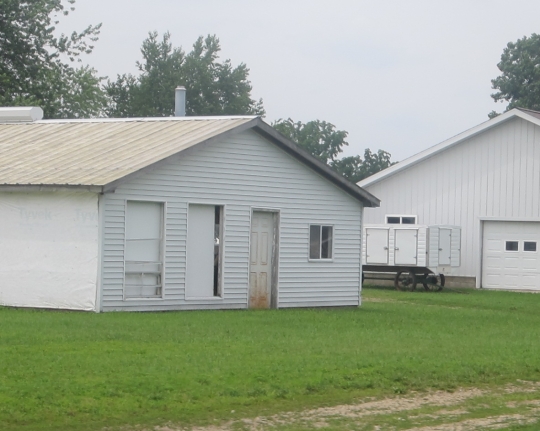 A church wagon poking out from behind a building.  I attended church Sunday in the Topeka area.  It was a very nice morning, the first time I had attended Amish church in Indiana.  When singing had finished, the bishop got up in front of the congregation and read out a few letters describing some of the financial needs for medical cases in the community. Rare blood disorder, open-heart surgery, and diabetes were among the ailments he listed.

Most of it was in Pennsylvania Dutch, but I did catch some of the figures, at least one of which I am pretty sure exceeded $100,000.  When there is a need, depending on its size, neighboring districts may be asked to help.  And if there is a very high bill (some can approach and even surpass $1 million), a call will go out to other communities as well.  Amish get pretty good rates by making cash payments to hospitals within 30 days.

On a related note, there is a new clinic opening later this year in Topeka, along similar lines as the Clinic for Special Children in Strasburg, Pennsylvania.  We’ll have some more on that as the date approaches.

Also, at church one young couple was “published” (the Amish term for formally announcing an upcoming wedding). They are to be married in about six weeks.  I wonder how they’ll spend the time til then. 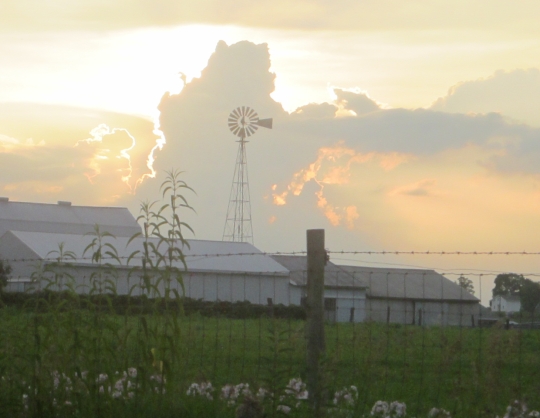 Sunset is a good time to take photos.  In this area the sun does not descend until quite late, being on the western edge of the Eastern time zone.  There were still traces of light in the sky until near 10 pm and maybe a bit beyond that.

How did you find this visit?  Well, it’s not quite like going there yourself, but I hope you enjoyed this little photographic journey.