3 Concerns for Amish Working in the RV Industry

When you visit an Amish community, you expect to see fields of some sort of crop like corn.  While you will see traditional grains sprouting in Amish areas of northern Indiana, you’ll also see fields of another crop–recreational vehicles, with row after row of the machines lined up outside the many factories and dealerships scattered about the region. 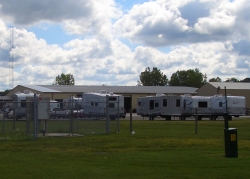 The Elkhart-Lagrange and Nappanee Amish communities have long been dependent on the local RV industry. Amish have worked in it for years, and RV factory work has traditionally been the majority occupation for household heads in this area.  In 2009, Elkhart and Lagrange counties had among the highest unemployment rates in the country (around 20%), in large part due to the downturn in this industry.

During that period a number of northern Indiana Amish suffered financially.  Some responded by starting home businesses to some degree of success.  Some struggled to make home payments, though I have also heard on a number of occasions that some had their mortgages paid even a year in advance, and so were in relatively good straits financially. However a number of Amish were reported to have sought unemployment assistance.

I just returned from northern Indiana two days ago. On two separate occasions during the week I spent in the area, Amish people used the word “booming” to describe the current state of the RV factories.

Amish say that even today it is not quite like some years ago, when you could walk out of one factory and right into another.  But finding a new RV job, or for some, any RV job, is not the challenge it was just a few years ago.  RVs are doing well again and a sense of security, however fleeting it may prove to be, has returned.

RV factory work is controversial among Amish, and you’ll hear different opinions on the industry.  When I speak to people about work in the RV factories, three main points of concern typically come up.  They are: 1) the money involved, 2) the work environment, and 3) stress.

Money of course is not a negative in and of itself.  It can be a very positive thing when used prudently, and there are wealthy Amish who have good family, community, and spiritual lives.  And while RV work won’t make you rich, it can make you rather well-off.  Some Amish in northern Indiana gross up to $2000 per week at RV pay rates of $35-45 per hour.  One man I spoke with compared this to paid labor in Amish communities in Ohio, which is typically more meager (half as much or less), and wondered how they get by out there.

Amish in northern Indiana typically have more disposable income than Amish people elsewhere.  Though the Elkhart-Lagrange community varies in the church standards of its 150-plus congregations, the community’s standards of living are generally rather high.

Driving through the area you see boats, trailers and other signs of prosperity on Amish properties.  Like Amish in Ohio and Pennsylvania who have experienced windfalls from leasing land rights to energy companies, Amish sometimes wonder if this is a good thing for their communities.

Pontoon boats and fishing boats are owned by Amish adults and youth; ski boats by youth

I noticed this firsthand when I lived and sold books in this area for four months in the summer of 2006.  While there were some temporary layoffs going on even then, work was available and the situation was still relatively robust.  In fact I did better here selling the Family Bible Library book set than in any other Amish community–not by a lot, but still better. This of course was a good thing for me.  And if money is being spent on something that is “upbuilding” for the home like that set of books, it is probably a good thing for the Amish too.

Even with the best intentions, having a lot of disposable cash inevitably changes lifestyles.  Coupled with the frenetic nature of factory work itself, one Amish small business owner and former factory worker observed that the industry had definitely affected the pace of life and the way Amish in the area lived.

All RV factories are not created equal.  I wondered which ones were more attractive to Amish workers and asked some Amish that question last week.  Amish often say the work environment is an issue, with some places suffering from poor environments.   “Poor environment” here typically means a “non-Christian” environment, as Amish describe it, with swearing and other unfavorable elements. While many Amish work in these factories, there are also many English workers. The presence of drugs may also be a concern.

RV builder KZ, located off of highway 20 running just south of Shipshewana, was highly praised by one Amishman I spoke with.  While the pay was described as “mediocre”, the environment, he noted, was quite good.  Unlike a number of other companies, KZ is still in the hands of its original owners, which the man described as “Christian”.  On the other hand, a number of RV businesses have been acquired by larger entities since the RV industry’s founding and subsequent growth in this area through the 1960s and 70s (for an interesting history of one RV company’s growth from being housed in a pair of chicken houses to becoming one of the world’s largest RV producers, see this history of Jayco).

For example, today Warren Buffet’s Berkshire Hathaway owns the large Forest River RV company which employs many Amish workers.  This doesn’t necessarily mean the company has a poor environment, of course, but having a local background as in the case of KZ may make one more attuned to worker concerns.

So while KZ was praised, some others, I was told, had inverse situations, with poor environments but significantly higher pay.  These are things that go into the equation, along with proximity to home, who you know that works there, and so on, when an Amish person is deciding which factory to apply to.  Poor work environment, however, is often cited as an issue by those who have left the RV industry for work elsewhere.

Stress could probably be folded into the work environment category, but I put it here separately for a few reasons.

I’ve never done it, but RV work seems like stressful work, and that is how Amish tend to describe it. There is a high level of production pressure, and Amish are paid well for achieving their objectives on the RV line.  However work in a noisy, constantly-going factory is a far cry from, say, tending patches of black raspberries, a sideline business which one Amishman outside Honeyville is developing while he’s not in the factory (and, when I spoke with him last week, seemed to wish he could do full-time).

Another drawback here would be the effects on family time. You’re away from home for a good chunk of the day.  Of course, Amish in other lines of work such as construction are gone for even longer.  One quirk of the industry, however, is that shift work usually starts around 4 AM.  This means that men are waking up very early and then coming home in the early afternoon.

Some see this as a good thing, as they have time to do things in the afternoon around home and family.  Unlike a small business owner with a shop on the property, they can leave work behind and forget about it, and not expect any interruptions from visitors.  Others see it otherwise, as men may return to nap for a couple hours just as the children are returning from school.

On a related note, I wondered why RV shifts begins so early.  I heard speculation that when the RV industry was first revving up, the 4 AM work schedule was meant to mimic a farmer’s milking schedule, though I am not sure if that is accurate. There is generally no second shift, so that is not the reason for the early start.

Another factor contributing to stress is the degree of Amish dependence on the RV industry.  Amish in northern Indiana are probably too reliant on RV factories, and I don’t think you’d get many objections from Amish to that statement. While Amish I spoke with feel it is a good thing that the industry has provided a means for many to support families, the fear that things could go south again must lurk at the back of many Amish people’s minds.

One large Amish business owner I spent some time with last week emphasized the stability of work in his business. While he doesn’t pay as much as the RV companies, his employees know they’ll have work year-round.  With fewer Amish businesses around there are fewer alternatives to turn to when RV businesses take a hit, such as in times of a poor economy of during fuel price spikes.

Of course things can go bad in other businesses but the fate of the RV industry is well outside any Amish individual’s or church’s control.  At least with the more nimble family-based Amish-owned businesses, one can adapt more fluidly to changing markets and you in turn have a greater measure of control over your fate. There has to be a measure of psychological health in that.

Made by Amish, driven by English

When I see one of these massive machines with Jayco or Coachmen written on the side rolling down the highway, I still find it funny to think “Amish hands probably built that”.  It’s another one of those quirky aspects of Amish society that surprise many people when they first learn of it. 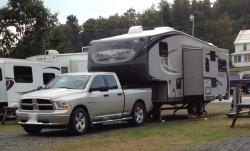 According to how many see things, Amish are still the plain and simple folk who tend the land and try to stay away from anything to do with the world, technology, or luxury. The recreational vehicle in and of itself embodies all three of those aspects in a very American machine, while also representing things like freedom, mobility and prosperity.

Though Amish in northern Indiana might not be first in line to buy RVs, they have definitely benefited from the prosperity the business has brought to the region.  The RV industry is certainly not a negative thing in and of itself, as it has brought a lot of material good to both Amish and English.

Northern Indiana offers an example of Amish adapting to a different type of regional work environment.  The situation in this area is unique. While there is factory work in other Amish communities, it is not seen to this scale or degree of Amish involvement in any other place.  It also brings a separate set of issues which Amish in the area have had to adapt to.

Amish in northern Indiana will probably continue to work in RV factories in large numbers for as long as they are around.  Following the recession and unemployment years of the late 2000s and early 2010s, Amish are back in the factories and things seem to be plugging along as good as ever.  Amish businesses which were started in those years have in many cases been sidelined as their owners have returned to collecting a factory paycheck.

While the recession may not have sparked the founding of as many businesses in the area as I once thought it might, it’s likely the lean years have reinforced the need to spend prudently and sock money away for the next rainy day. Or at least one would hope so.