Today, the second part of an Amishman’s talk to an Amish youth group.  The first part adressed popular music.  This installment covers cell phones and the internet.

The speaker is a father of children of running-around age.  This talk was given a few weeks ago to a group of around 150 people in his community, both youth and adults.

I would like to move to cell phones.  Some think they are no good and we shouldn’t have anything to do with them.  Others feel a little different than that.  There are parts that are good and even to a degree sometimes necessary.

I am not here to take sides.  I don’t have a cell phone nowadays.  I used to work at a place where they had cell phones and computers and I know the basics on how to use them. 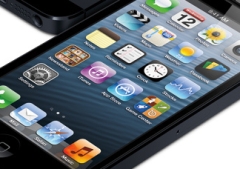 However this we can all agree on I think. There is a lot of distraction and trash on the internet.  And it is one of the most complicated and difficult issues the Plain people have ever dealt with.

I want to touch a little on the nature and dangers of the internet.  English people as well say that the internet is bringing more change to the way we think, act, and live.  It is changing all the old patterns of behavior.  It will bring more change than anything else has since the invention of the printing press.  It is hard for me to imagine a world with very few books but so it was about 600 years ago.

It is important to remember that nobody regulates hardly anything that gets put on the internet.  You can post and view nearly anything you want.  In the past with radio and television the government had certain standards for things you could or could not show and say.  Over the years this deteriorated.  And now with the internet you can do nearly as you please.

A teenager writing in the daily paper gave her meaning like this.  Social media meaning Facebook and Twitter have been useful.  The potential to keep in touch with friends from faraway places has never been more achievable and the ability to be informed with breaking news every minute is a luxury people 20 years ago did not have.  Again this was her opinion but I think we can agree with what she says next.

Unfortunately it has also corrupted morals and values to such a degree that there are no limits anymore.  This was written by a 17-year-old English girl.

And yet there is nothing on the internet that has not been with humans for thousands of years ever since the dawn of time.  Humans have always been sinful, violent and lustful.

The difference here today is that the cell phone and the internet brings all this together in one little device.  You hold the whole world in your hand and you can put it in your pocket.  And anymore there is not much difference between a so-called smart phone and a more innocent looking flip phone.

This all makes the development of compulsive behaviors and bad habits so so very much easier and so much more likely.  A young Mennonite boy I worked with said that you say things to people online you never would to their face.  I asked a young girl I work with if this would be fair and true to say.  She said Oh yes very definitely that is true.