What do Amish think about modern music?

We’ve had a good bit of discussion on Amish youth lately.  Two weeks ago, a story on Amish youth on Facebook went viral across the internet.  Amish adolescents were directly or indirectly a subject of numerous talks at the recent Amish conference.

If you ask Amish people, youth issues are among the main concerns in many settlements–so much so that families may move halfway across the country to provide a better situation for their children.

Today we have an excerpt from a talk recently given by an Old Order Amishman to a youth group in his community. This talk was shared with me by the speaker, a father of six, who has given permission for it to be shared here. 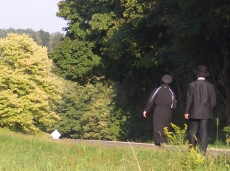 It was originally given to a group of about 150 Amish individuals, half youth, half parents.  He told me it was a humbling experience which made him feel nervous and emotional.

The talk is comprised of two parts: a shorter introductory part about modern music, and a longer second part about cell phones and the internet.  I’ll be sharing the part on music today, with the rest to come in a few installments.

I think what you’ll read below is a good, succinct answer to the question posed in the title of this post.  It may not represent every Amish person’s thoughts, but I think it’s safe to say most would sympathize with this man’s words.

What you’ll find below is the beginning of the talk, which was delivered after giving thanks to God for the privilege of speaking, and after sharing “appreciation for the efforts the young people put into having decent supper crowds and singings.”  All that follows is content from the Amishman’s talk.

With music I want to encourage you to keep up your good singing.  It is very uplifting to attend one of your singings.

It’s just the way it works.  Which music and habits you acquaint yourself with when young is what tends to stay with you.  Yes there is something like doing better and overcoming bad habits but the struggle stays with you.  Dad said so and I found out he is right.

A good thing to keep in mind is that the purpose of singing is to give glory unto God. It should be an act of worship.  In Colossians it says: Encourage one another as you sing psalms, hymns, and spiritual songs with gratitude in your hearts.

The question is this: How much of the rock and country and other music of popular culture is for the glory of God?  Even with contemporary Christian and gospel music you have to wonder is the focus on the message or on the artist and their performance.

In Jeremiah it says: Stand at the crossroads and look.  Ask for the ancient paths. Ask where the good way is and walk in it. And you will find rest for your souls.