In closing a recent post on Amish use of solar and wind power, I joked:

Maybe one day we’ll observe Amish buggies rolling down the road, plastered with solar panels, or with whirling wind turbines planted on their roofs.

The first part of that tongue-in-cheek prediction is actually closer to reality than one might think, at least for some Amish.

A reader shares a photo of a solar panel which some Amish mount on the buggy roof.  The panel charges the battery used to power the buggy lights. 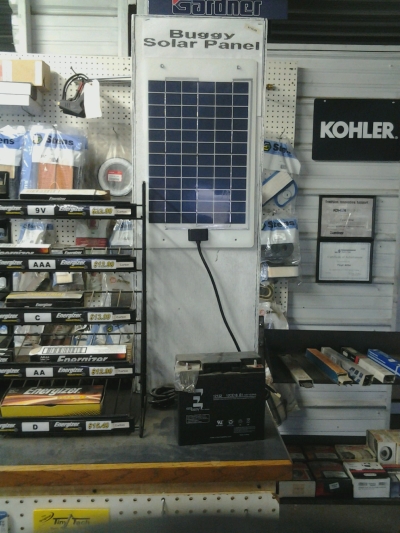 Buggy-mounted solar panel in an Amish shop in Indiana

When we lived in Arthur I asked one of my neighbors if he thought we could market a solar panel that would mount on the top of a buggy to recharge the battery.  He told me he didn’t think it would be allowed. So when we moved to northern Indiana I was surprised they were already using that “technology”.

I’m not sure if it has been adopted in Arthur or not. Wellspring Components has a demo model in their shop that consists of a wheel mounted alternator that recharges your battery while you drive. Most people still remove their battery from their buggy when it needs to be recharged.

I’d guess the fact that it is roof-mounted and of a darkish color might make this an easier addition to accept.