Following up on a story from May, a man who was attacked by a cow on an Amish farm has been recovering. There was little info in the initial report on injuries suffered by Harley “Chubby” Fry. It turns out he was hurt badly. Fry was essentially paralyzed after the attack in central PA:

Firefighters from Elimsport and Clinton Township reported to the farm about 12:30 p.m., initially dispatched for breathing difficulty.

When Fry was taken to the Geisinger Medical Center in Danville, he had limited movement in his arms, none in his hands, and no control below the waist. 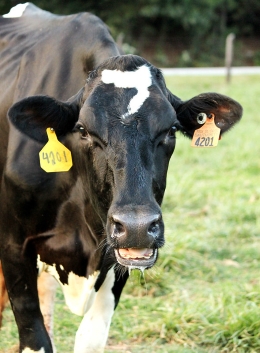 Fry had surgery to fuse vertebrae and relieve spinal pressure. The good news is he is gradually overcoming his paralysis and regaining use of his limbs:

Recovery has been slow as Harley has been unable to move his limbs until recently. He is now able to use his right arm and more recently, his legs.

“He’s made amazing progress with his legs,” said wife Bertha. “He also has regained most movement in his hands and was able to operate an electric wheelchair.”

Fry has of course had medical expenses and had to have modifications done to his home (I assume for wheelchair access and related reasons). Some benefit efforts are ongoing. Here’s the relevant info:

The committee scheduled a pig roast benefit event on Saturday, Aug 1, at Frymeade Farm, 1657 Chippewa Road, Muncy. Food, drinks, and fundraising activities will be offered. Tent and tables provided, but attendees should bring a chair.

A Facebook Fundraiser page seeking $40,000 has received nearly half that amount in donations, but other methods to donate include directly mailing “Chubby” at 1133 Chippewa Road, Muncy.

An account at The Muncy Bank & Trust Company is also available for anyone to deposit donations, listed as the “Harley-Chubby Fry’s Benefit Account.” How to donate:

This seems like a good cause for the local Amish to be involved with as well. After all, who does benefits better than the Amish?

There is no word in the article on that. The associated surnames are not Amish ones. Harley Fry, however, would pass as an Amish name in some places, so I wonder if the man has some Amish background. Either way, here’s to his continuing recovery.