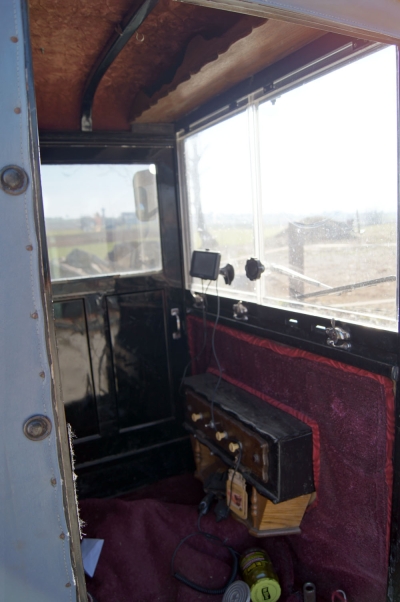 Mike adds:  “I know Old Order Amish are not opposed to some forms of modernity. It just strikes me as a good representation of the mixture of old and new. Somehow one doesn’t seem to think that GPS units are needed on such a slow-moving, short-distance vehicle.”

I first assumed this is a youth buggy, though, perhaps not.  The usual caveats about different Amish accepting different technologies apply here.   I think a good rule of thumb is if your buggy doesn’t even have a storm front (the “windshield”) to stick the GPS to, your church will be less likely to tolerate GPS devices 🙂

I don’t know the current thinking on this in Lancaster churches but I don’t see why GPS technology would be necessarily seen as threatening.  A GPS is basically a dynamic map.  Sure it has a modern-looking screen, but some Amish already permit, passively or actively, a number of tools with screens (cell phones, some manufacturing equipment, etc.).  That said I believe some GPS devices have internet browsing capability (though so do most cell phones nowadays).

The authors of An Amish Paradox touch on this technology, noting that “Many products…such as iPods, GPS devices, and cell phones are not easily detected by bishops and, in any event, may not have been anticipated when church Ordnung were formulated. In some cases, usage of these devices has been explicitly forbidden, but in other churches and districts, church members and leaders alike simply “look the other way” (An Amish Paradox p. 108).

Have you ever been struck by this Amish “mixture of old and new” as Mike describes it?  Another example that is more subtle but has always stood out for me, no pun intended, is Amish footwear.  Pretty much every other item of Amish clothing can be and often is handmade, in Amish homes or by traditional cottage businesses.  However I haven’t heard of many Amish making their own shoes.

Many opt for store-bought major-label footwear, with brands such as Skechers and New Balance being popular (of course worn in the proper colors and styles).  “Old-fashioned” Amish clothes might not always seem the most comfortable but the modern footwear certainly does.