Amish, Fracking, and the Energy Industry

Energy extraction techniques such as directional drilling and “fracking” (short for hydraulic fracturing) have become a hot issue in both Amish and mass society.  These techniques, some of which have been around for quite a while, have been hailed for their potential to transform the energy industry.

Recent developments combining fracking with horizontal drilling have made the process much more viable, leading to the recent boom in states like Pennsylvania and Ohio.  Supporters say these techniques make a lot of economic sense against the backdrop of rising fuel prices and energy market instability.

The Amish and Energy Extraction

Last summer, I spoke with an Ohio Amishman on this topic.  Amish landowners in the region had been getting involved.  One of the most respected business leaders in his community, he was deeply concerned over the issue, and the effects it might have on his people.

Part of his concern was easy wealth.  Energy companies pay for the right to drill on land.  The price paid for a land lease can be substantial.  Such a sudden influx of cash would not bode well for his people, he feared.  He related stories of English who had experienced serious discord over the issue.  Disputes over money and drilling rights had led to neighborly, and even family, disintegration.   Another tangible concern the Amishman raised was the heavy traffic of transport vehicles disturbing peace and road travel. 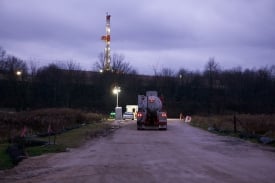 Others worry about the environmental impact of the process, with groundwater contamination and seismic activity among the concerns.  Fracking for example relies on pumping fluid into the ground to fracture shale deposits and release natural gas and oil.  The process produces salty wastewater which must then be disposed of.  Recent earthquakes in northeast Ohio have been blamed on wastewater disposal wells.

Reader joe_g_wv voiced some of these concerns in a recent comment:

My girlfriend lives near Burton, Ohio with many Amish neighbors. Unfortunately, gas company landmen have taken advantage of the Amish folks’ trust and lied to them.

The process is horizontal drilling with high-volume slickwater hydraulic fracturing, the same process that’s poisoning well water and causing earthquakes around the Northeast. A typical well pad will be five to ten acres, measure 70-90 decibels at 200-400 feet distance, and require thousands of truck trips.

Because of low natural gas prices, companies are moving further into Ohio where more profitable liquids can be extracted. I am seeing Amish trust in gas companies decline – over broken promises of road repair, temporary disturbance, and wealth – but it may be too little, too late.

On the positive side

Supporters argue that concerns over fracking are overblown and are being cynically exploited by an environmental lobby.  They point to the economic boost energy extraction can bring to depressed communities.  Others note that developing domestic resources will enhance national security by reducing foreign energy dependence.

The topic is pretty heated.  This recent article from Popular Mechanics addresses controversial claims over fracking and natural gas drilling.  Here’s a pro-fracking view.  And an anti-fracking one.

What do you know about alternative energy extraction techniques?  Have you seen them in your community?  Are they a threat or a boon?