The “Amish Bible”, and the appeal of Bible story books

Which Bible do Amish use?  Typically, the Amish use the German Martin Luther version, particularly for church readings.  For an English version, the most favored translation is the King James edition (KJV).

Some Amish use the New International Version (NIV) as well.  Often, the Bible Amish read in the home will have a dual format-German on one side of the page, English on the other. 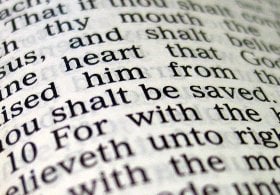 Amish use the King James Version of the Bible

Amish speak Pennsylvania German, English, and have varying degrees of fluency in High German.  So an English translation can be useful.  When I visit Amish friends in Pennsylvania, I sometimes get asked to read a chapter after breakfast.  Since I speak no German the English comes in handy.

I sold Bible-oriented books in Amish communities over four years, which is how I first met the Amish.  One of the books I sold was called the Layman’s Bible Encyclopedia, a 1000+ page book with definitions of Biblical figures, terms, and concepts.  It was quite popular among Amish.  I believe my customers appreciated the convenient reference and clear explanations.  I found ministers in particular liked it.  Amish also make use of concordances, which list where individual words and concepts can be found in Scripture, and their context.

My Bible Friends, a set oriented to younger children

The Egermeier’s book is a single volume particularly popular among Amish.  When it comes to sets, you typically have a few main kinds:  My Bible Friends, which is a five-book set with large illustrations and few words, and which is oriented to younger children.  The Bible Story, a 10-book set which is also known as the Arthur Maxwell series, is also quite popular.  Both of these sets are commonly available in bookstores in Amish areas and for purchase online.

Then you have the Family Bible Library.  The Family Bible Library, or FBL, was published for nearly 40 years by the Southwestern Company of Nashville, and sold primarily direct to customers.  This is the job I was fortunate to have for a few years.  As far as I know the FBL is no longer printed.

The Family Bible Library differentiates itself from the other sets on a couple of counts.  The set consists of two elements–Bible stories, encompassing the Old through New Testament, which are simply written and illustrated.    The illustrations are attractive but in some ways not quite as vibrant as those in the Arthur Maxwell set, for instance.

Nonetheless I found they appealed as their artistic style was different, and some of my customers felt these images were “more realistic”.  The stories themselves were plainly written, and included “lesson questions” at the end, which were oriented towards children and reviewed the main themes to drive home the message of the story.

I found Amish mothers in particular quite liked both of these features.  The simplicity of the stories they said made it easier to translate into Pennsylvania Dutch for their younger children.  And the ready questions gave them something to ask the children, rather than having to make up their own.  I found that Amish parents, like others, saw Bible story books not only as “upbuilding” reading but as teaching tools.

The second part was the background information in the books.  For instance, the FBL includes timelines, family trees of Biblical figures, as well as explanatory information which helps give context to the stories.  For instance, the set has maps of Paul’s missionary journeys, and a section on what bulrushes were used for in Old Testament times (they were made into paper and even sandals).  This feature I found extended the appeal of the set to adults.

What was interesting was that on more than a few occasions Amish ministers told me they had found the books to come in handy in preparation for church.  In particular they had used the set to review the sequence of Biblical events in preparation for the Council service (during the lengthy Council meeting, which happens twice a year preceding Communion, Amish ministers preach the Biblical Story from Creation through the conquest of the Promised Land, and then into the New Testament and Christ’s teachings).

Often, Amish customers who already had other sets like the Arthur Maxwell set would purchase the Family Bible Library, because of the differences between the two.  I also met numerous people who already owned the sets.  I remember one family had received the books as a hand-me-down from their parents.  The grandfather in this case, a bishop, had purchased the set from a salesperson in the mid-1970s.

I mentioned above that I felt fortunate to do this job.  One of the reasons was in seeing this staying power of the books themselves.  It was not uncommon for a family to have had them for 20 years.  The durable construction helped.  The covers were a dull tan and brown–not the most attractive, but plain and a good tone which showed less dirt and wear.  And they were tough.

Typically I would operate by taking orders and delivering the books a few weeks later.  Delivery period was always a lot of fun, as the children were typically excited to be getting new books.  The joy they showed on delivery day was a reward in itself.  Often I’d hear from mothers that their kids had been watching all day for my red truck to show up.  So I got to feel a bit like a Bible story Santa, I suppose.

I eventually sold over 1,200 sets to Amish families, in five states and around 15 communities.  It is still nice to think that on Sundays families may be using the books to delve into the background of that day’s Scripture reading, or sitting with their children weeknights to share a bedtime tale and a good lesson.  That thought is a reward that has continued, even after the job itself has finished.