Amish and the public

How much do Amish interact with the public?   It’s a broad question, without a straightforward answer.  Two recent stories show Amish crossing boundaries of sorts.

On the whole, Amish are less likely than your average American to call the police.  They have been criticized for this reluctance, particularly when criminal matters are involved.  Amish have cooperated with the law in the recent Ohio beard and hair attacks, however.

Arlene Miller, wife of one of the beard-cutting victims, explained why they pressed charges: not for revenge, but to help others in Sam Mullet’s group.   “We don’t believe in fighting,” she said. “We do believe in turning the other cheek, but in this case there’s nothing wrong with struggling to get away,” she explained to an AP reporter.

Dennis Miller, an Amishman from a different Ohio community, shared his opinion in a different story:  “Our group, I don’t know if we would report it. We wouldn’t go and press charges against them,” he said. “But if the church rules allowed it, it would be a good idea.”

Is Dennis Miller’s church’s Ordnung explicit about not contacting police?  That is an interesting question.  My first thought is he meant it was simply “the way things are done” in his community, but maybe his group directly covers that point.  Either way it sounds like he is sympathetic to the idea, at least in this beard attacks case.

Attitudes to the police vary among Amish.  Amish adhere to Two Kingdoms beliefs, which can be taken as a basis for avoiding resorting to worldly authorities.  Amish involvement with police after the Nickel Mines shootings has been seen as one example of increased cooperation and changing attitudes towards law enforcement.

Amish famously refuse government assistance.  They also avoid commercial health insurance plans, relying instead on community plans and cash contributions from the church.  One family in New York has reluctantly gone public in the hopes of saving their son, who has a rare medical condition.

One-year-old Amos Hertzler cannot eat regular food, because he was born with esophageal atresia–meaning his esophagus does not connect with his stomach.  He is fed every four hours by a feeding tube in his abdomen. 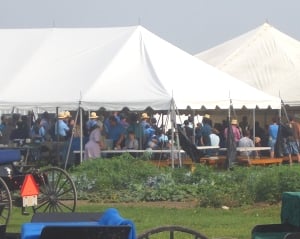 Amish interact with the public at auctions, popular in many communities

Surgery to fix Amos could cost $250,000 or more.  Amos’ parents and community have decided to go public in the face of the costs.  They have arranged a public auction, and have given an interview to a Buffalo newspaper.

Benefit auctions are actually quite common among Amish.  I think the reluctance here stems from the group involved.  The best-known Cattaraugus County Amish group (often referred to as the Conewango Valley group) are known as Troyer Amish.  They are technologically similar to conservative Swartzentruber Amish, for instance using oil lamps and no indoor toilets (see Johnson-Weiner’s New York Amish for more).

The Hertzlers’ community, however, seems to be not the Conewango Valley people, but a much smaller Cattaraugus County group nearby, of a single church district.  By the reporter’s description, they too seem to be quite conservative, though.  In the story, they say they’ve never held a benefit auction before.

An extensive news story in a major state paper is also a bit more coverage than you’d get for your typical benefit auction.  The willingness on the part of Amos’ parents to go to media probably indicates the direness of the situation.  “It’s not an emergency, but it’s the next thing to it”, said Amos’ uncle.

This also makes me wonder how the community has been able to respond to the need themselves.  The more conservative Amish groups tend to be less wealthy.  I’m not sure what ties this community might have with the much larger Conewango Valley group, or in other settlements.  In any case, it sounds like the eventual cost for Baby Amos’ treatment could well exceed the estimate.

Amish and the world

For each of these stories, there are numerous others that the vast majority of the public never hears about.  Amish often handle both individual transgressions and health matters amongst themselves, for good and bad.  In the case of the former, David Weaver-Zercher notes (paraphrased in news story #1 above) that “It’s more typical for police to get involved if the Amish feel they are in danger or when they’re involved in a high-profile crime and have no other choice.”

Reluctance to participate in worldly institutions is a hallmark of Amish practice and belief.  The lines can blur, however, and as we see in these and other cases, Amish of different stripes respond differently in different situations.