A community of conservative Amish in upstate New York (St. Lawrence County) have canceled a meeting with county officials to discuss adding additional safety reflectors to their buggies.

Officials want the Amish to add strips of white reflective tape in two places on the buggy. Here is what the tape on the wheel spokes would look like: 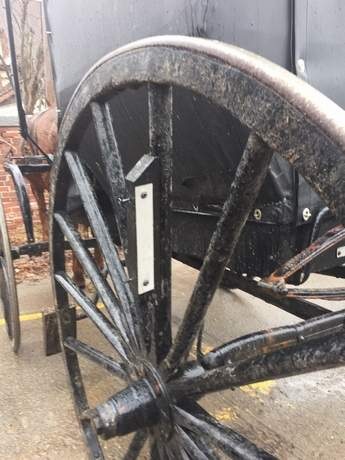 The “flash” such a strip would create as the wheels turn would get attention of motorists, the thinking goes.

This Swartzentruber Amish community does not use the SMV triangle and non-Amish residents are concerned over safety following years of accidents.

The Amish had apparently said they would consider it, and must have agreed to a meeting, before backing out:

The proposal was supported by a state police accident reconstruction expert from Troop B who met in Heuvelton with some Amish bishops, Sheriff Kevin Wells, Mr. Lightfoot, and legislators James E. Reagen, R-Ogdensburg, and Larry W. Denesha, R-DeKalb.

“He made his pitch and they agreed to think about it,” Mr. Reagen said. “They took it to the rest of the Amish groups to see if they could reach a consensus. Unfortunately, they could not.”

He said there are about 12 different Amish groups in the county and they don’t all follow the same rules.

I think he may mean 12 different church districts, not separate “groups”. There are several divisions within the Swartzentruber churches, so their Ordnung is not uniform. There are also at least two more Amish settlements in the county besides the main Swartzentruber community. 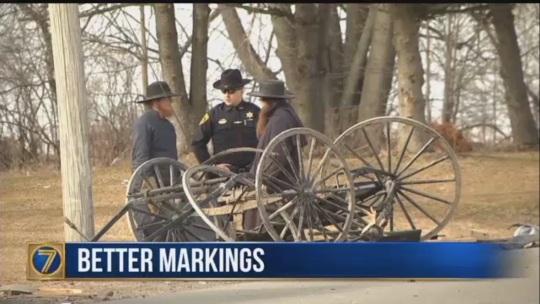 So what next? Sounds like law enforcement will be getting involved:

“I think what we need to do now is have a chat with the sheriff and state police and this committee and see if there’s anything that can be done to put these folks in a position where they’ve got to do something,” he said. “Maybe getting a ticket for not having what you’re supposed to have would be incentive.”

An editorial in the Watertown Daily Times appealed to the Amish to consider the potentially life-changing burden of guilt they may be placing on their non-Amish neighbors:

While traveling through areas with Amish populations, drivers need to be alert to buggies and wagons in close proximity. Mr. Lightfoot said that most collisions between motorized vehicles and Amish vehicles occur during daylight hours.

And just the same, Amish people should consider the emotional toll exacted on those who drive cars and trucks when they are involved in someone else’s death. The Amish may well view such accidents as the will of God. But the guilt that motorists carry is a heavy burden, and it’s not unreasonable to take precautions to reduce crashes.

Progress on this matter has been slow, and no doubt frustrating for the county officials’ side. In 2015, they thought they had an agreement which included doubling the amount of reflective tape on the buggies. It’s reported that Amish have resisted adding the additional tape, though they have been more diligent about replacing reflective tape and improving lantern visibility.

Sounds about par for the course for this group of Amish, which is known to be highly traditional and resistant to change.

That said, Swartzentruber Amish have at times been open to adapting their transportation for safety’s sake. The most recent noteworthy case was the group of Amish in Ohio who tested unusual visibility markings as a potential solution to improving road safety.

I have not heard how that experiment turned out, but it was an uncommon example of Amish from this particular group adapting an innovation unseen elsewhere among Amish. I wouldn’t count on that repeating in New York, however.

Yet officials are determined to see changes through. As Larry Denesha states in the video below: “Really don’t know what steps may be available. But we’re not going to let this drop.”