Some time ago I was asked about the famous photo of Amish schoolchildren running away from officials in Iowa.  You can see the photo below, taken during an incident in 1965.  It was a turbulent time for Amish which ended with the 1972 Wisconsin v. Yoder Supreme Court decision enabling Amish schooling as we know it today.

This photo was taken in Buchanan County, Iowa, after a failed attempt to bus Amish children to new consolidated schools.  You can read a summary of events leading up to that day here.

John Hostetler writes of the culminating event that “school authorities forced their way into a private Amish school in order to compel the children to board a bus to take them to the consolidated town school.  The press got wind of impending events and recorded the scene as frightened youngsters ran for cover in nearby cornfields and sobbing mothers and fathers were arrested for noncompliance with an Iowa school law” (Amish Society p. 264). 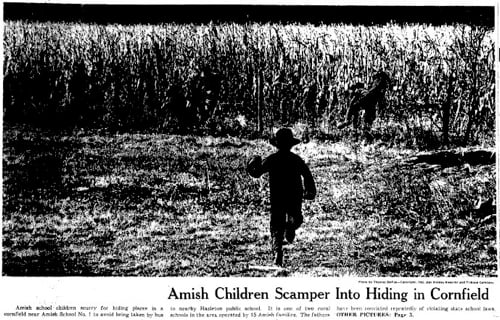 The photo would help galvanize support for the Amish, as David Belton, who made the film “The Amish” for PBS, explains:

On a cold November morning in 1965, a journalist took a photograph that would inspire a religious freedom movement as well as a legal battle culminating in a historic Supreme Court decision. The grainy, black and white image of a group of Amish children running away from police into a cornfield in rural Iowa appeared in local and national magazines and newspapers throughout the United States. That photo prompted a young Lutheran pastor, Rev. William Lindholm, to begin a lifelong commitment to safeguard Amish religious freedom.

Belton writes in this piece about meeting Reverend Lindholm and about how he became involved with the cause of Amish schooling in the 1960s, setting up the National Committee for Amish Religious Freedom and guiding the legal fight for the Amish.  Lindholm is now in his 80s but remains active; his website is amishreligiousfreedom.com.