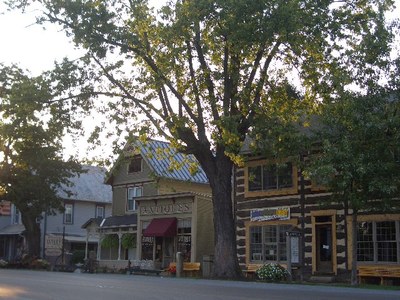 WHEN I was in college, I read a book by Sherwood Anderson called Winesburg, Ohio.  I remember it as a mostly downbeat collection of vignettes of small town life.  As I recall it was firmly entrenched in the university Lit canon.  Inspired Hemingway or something like that.

This is not that Winesburg.  Anderson’s town was fictional.

The real Winesburg, Ohio also happens to be a sleepy little spot on the map.  It’s got some very nice old homes, a museum, family-style restaurant and a general store that dishes out free coffee.  Buggies pass by frequently.  The public school in town, like many in Eastern Holmes County, educates a number of Amish children along with the English ones. 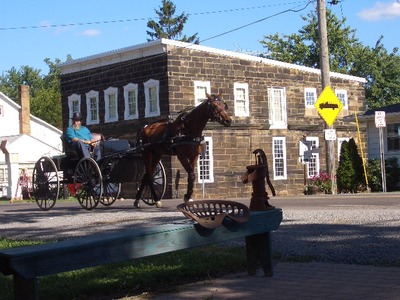 It’s one of my favorite spots in the settlement–a bit off the map but a lovely place to stroll through.

I dropped in on a local auction last week, set up to benefit a Winesburg-area school.  The attendance breakdown was about 90% Amish, 10% English and Mennonite.  I grabbed a paper bag full of salty-sweet kettle corn, an ice water and plopped down.  The auction was in full swing.  Bows, boots, lots of hunting stuff.  Two auctioneers, one Amish, one a youth who could have been Amish as well.  How do they speak that fast?

Auctions, or simply, ‘sales’, are a chance for Amish to socialize, grab some good food, and maybe get a good deal on something while raising money for a good cause.  They’re often held for schools or families in need or even for international causes, as in the long-running Haiti auction, held in Ohio each year as well as in Pennsylvania and Indiana.  I had a chance to drop in on the Haiti event as well about two weeks ago in Mount Hope.

Delicious Haitian rice and beans with fried plantains was among the food on offer, along with the standard rhubarb pies and barbecued chicken and so on.

A local Amish woman mentioned that she enjoys the Haiti Auction because it draws so many types of Anabaptist peoples–not only Amish from other states but many different Mennonite groups–from the Old Order to the more progressive affiliations.  There was certainly a diverse mix of garb on display that day.