Today marks a year since the Nickel Mines School shooting.  Ten girls were shot.  Five perished.  Five lived on.  A community was rocked by an unthinkable loss.  The world watched and learned a rare lesson in forgiveness and grace.

‘The happening’ is the name local Amish attached to the event, and The Happening is author Harvey Yoder’s attempt to reconstruct, order, and make sense of the goings-on of that day and of what followed.  Told from the perspective of a student shot that day, ‘Rebecca Sue’, the work weaves elements of a few girls’ factual experiences into the story of an eighth-grader who, wounded herself, also lost a little sister that day.

Why is this a good read?  Shouldn’t we move on, as local Amish have implored the media and onlookers to allow them to do?

Yoder has done an excellent job of respectfully telling a story that, as is evident from the telling, some have a deep need to discuss and detail and grieve over, but which others instinctively avoid engaging.

The Amish portrayed here are simply trying to repair themselves, the best they know how.

Nightmares and fear plague the families affected, and not just the ones directly affected:  “The teacher from the Crossroads School said she couldn’t understand why one of her third-grade girls did not want to go to the blackboard to do her lessons like usual.  Then she remembered the girl is Miriam’s cousin and realized that she’s afraid to turn her back to the school door.’

All this underscores something that should be obvious by now:  the Amish are living, breathing human, just like the rest of us. They forgave–and yes, it was quick–but it wasn’t a one-off thing, and it certainly wasn’t easy. They had to do it over, and over, and over again.

Over time, all the same questions anyone else would have popped up in their minds–they whys and the wondering and the regrets.  Christian teachings of acceptance and faith temper the emotion.  Some feel deeply for the one who caused all their pain, as Rebecca Sue’s brother Benuel says:  ‘For me, I sorrow most of all for Mr. Roberts’ soul.  I think of the terrible place where he is now.’

Did the event open the Amish up to outsiders, and vice versa, as some have said has been one unforeseen blessing?  Yoder finds evidence for it here.  A local officer who carried the wounded out of the school that day describes the unity while visiting with Rebecca Sue:  ‘There were no differences between us.  It did not matter who was Amish or non-Amish.  We were all one, trying to pull ourselves together.’ 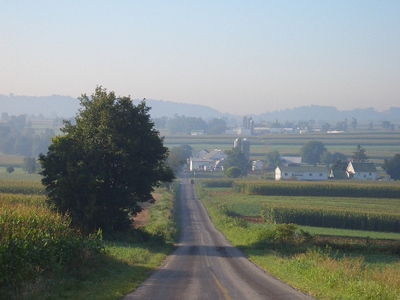 One year on, the community continues to mend.  Books on the happening were to be expected;  this is one of at least three that have been published so far.  Hopefully this will be one that keeps the lesson of forgiveness alive, and that helps some to continue to heal as well.  As the people in this book discover, holding it in may not be the best way to deal with it.  Going over it all again may just help.

Rebecca Sue describes one episode of a kindly Mennonite woman’s visit to her home, and her outpouring of tears, for the umpteenth time, over the loss of her little sister:

‘It was then that I found out how healing tears can be.  Yes, I had cried before, especially at night.  I had cried tears that had bound me all up inside.  This time it was different.  Something opened up within me that day that I had not realized I had been holding back.  When, minutes later, my sobbing had almost stopped, I think the first thing I realized was that the weight inside me was gone.  I heaved a sigh of relief–a great, huge, shaky sigh.’