Will Amish vote in the 2012 election?

Every four years inquisitive reporters try to discern what the Amish are planning to do in the upcoming presidential election.  I think this is partly due to natural curiosity–what do a “people apart” think about a civic activity such as voting?

But mainly I believe people are interested because the largest Amish populations are found in Ohio and Pennsylvania, two swing states heavily contested in each election.  With the campaigns’ election machines pinpointing target groups of voters, it’s no surprise the Amish, who number about 60,000 in each state, would come into the sights of electoral strategists.

Which party benefits from the Amish electorate?  When Amish do vote, they tend to go with the Republican party.  The conventional wisdom is that they are swayed by Republicans’ stances on social issues.  “Naturally we would lean Republican. That’s more our thought process” Iowa Amishman Levi Miller tells Richard Quest in this CNN article (no longer online).

Accordingly, the George Bush campaign actively sought Amish support in both 2000 and 2004 (see this research paper by Donald Kraybill and Kyle Kopko for more).  Bush met with Amish during a 2004 visit to Lancaster County and by all accounts was warmly received.  Did the Amish come out for John McCain in 2008?  My sense at the time was that whatever voting enthusiasm might have existed for McCain was dampened by his perceived ties to the nation’s military activities.

So how many Amish actually vote?  Most do not, considering it improper for a people “in the world but not of the world” to take an active part in choosing worldly leaders.   However there is a minority that do cast ballots.  In this Economist magazine article, a Lancaster Amishman estimates that “perhaps a thousand” are registered to vote.  That number may be low, as Kraybill and Kopko found that over 2,000 had registered in 2004 (though that year saw unusually high interest from Amish).

The Amish have also figured in the recent debate over voter identification, as detailed in this Lancaster Sunday News article.  Pennsylvania has passed a new law requiring ID of voters.  Religious groups such as the Amish can acquire a nonphoto ID which will suffice for anyone that wants to vote [note: a judge has since struck this law down].  In the piece, Amishman “John” claims “There are quite a few interested [Amish] voters” while another Amishman says that “The young guys usually vote, if anybody,” and that “Some oldtimers do.”

I haven’t read much on a Mitt Romney (or Obama, for that matter) strategy to try to capitalize on potential Amish voters.  Among the scant evidence I’ve found is this photo of a Lancaster-style buggy decked out in U.S. flags and Romney-Ryan regalia (is this real?).  I don’t know the story behind it, but I’d rather doubt this was an Amish project.  My guess is that if it’s not photoshopped it’s probably the work of a motivated and perhaps overly hopeful Romney supporter. 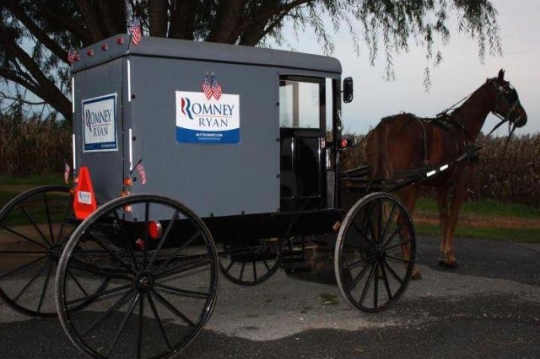 Have you seen any evidence, or heard anything from Amish acquaintances, about voting?