One of my biggest nightmares 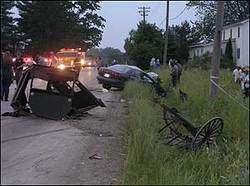 Accidents between Amish buggies and cars happen.  Way too often.

This summer during a three-month stay in northern Indiana, three fatal accidents occurred.  One happened when a distracted driver hit an Amish man and two sons riding in a pony cart, killing all three.  Another was caused by an Amish Rumspringa-age youth, who attempted to pass in a no-passing zone.  He and the driver he hit were both killed.

That one undoubtedly fueled criticism for wild Amish youth activities, yet in the vast majority of accidents that occur, the Amish come out the losers.

The last one occurred when a van carrying an Amish work crew was struck on the way to work.

I remember returning to visit a family whom I had met earlier in the summer.  The father, who happened to be a part of this crew, was fairly injured, had trouble getting around, but was alive.  His boss, another Amish father I had met a few weeks before the accident, was not so lucky.  And neither was the crew’s English driver. 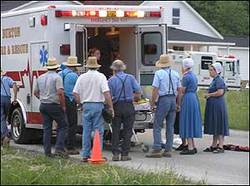 I hate to write about this but you hear about these things happening all the time.  A teacher was killed walking to school not long ago in Lancaster County.  Another, thankfully non-fatal accident occurred last month in Allen County, Indiana.

This one (article no longer online) is striking, however.  Why?

It’s been ruled a homicide.

I have driven on the road where this accident occurred, just outside of Arthur, Illinois, a number of times;  it is at the very center of the settlement

and cuts through a high density of Amish families.

The Arthur Amish use lights and reflectors. Still, it’s amazing how fast you can come up on them, when buggies only travel around 5-8 mph.  This accident occurred in the morning.  The article does not say if the buggy lights were on.  Apparently it was extremely foggy.