There is just one Swartzentruber Amish community in Pennsylvania, and it looks like they will soon be gone from the state.

Following well-publicized disputes over building codes, outhouses and SMV triangles, the Swartzentruber Amish community in Cambria County, PA, is dwindling.  The settlement is down to 9 families (from a peak of 21), “with the rest planning to be moved by the end of next year.”

This article reports that one family has purchased a home in the Watertown area of New York, while a land agent in Jasper, NY is seeking Amish buyers and/or renters.  I have also heard that families are moving to the Heuvelton, New York community on the Canada border.  Apparently the Empire State is a more attractive bet for Swartzentruber Amish these days. 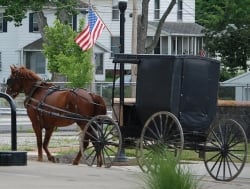 Swartzentruber Amish can be found in significant numbers in both New York as well as in Ohio, where the group emerged following division during the 1910s.  Pennsylvania, the state between the two–and the one having the longest and most prominent connection to the Amish–will no longer have a Swartzentruber presence.

Assuming the exodus takes place, will Swartzentruber Amish ever return to PA?  Well, who knows. I do think this kind of story makes an impact.  The narrative becomes “they tried and it didn’t work there”.  Pennsylvania also doesn’t have much of a history of Swartzentruber settlement (beyond this community I don’t know of another).

Who are the most conservative Amish in Pennsylvania outside of the Swartzentrubers?  Most likely the Nebraska Amish of Mifflin County.  Though if anyone knows of similarly conservative PA Amish churches I’d be interested to hear (the state has over 50 settlements).