Why Are Amish Building RVs?

Did you know that Amish in one community are heavily involved in building luxury recreational vehicles?

According to one source, “more than 80 percent of global RV production is based throughout the region”, the region being northern Indiana.

This includes the 3rd-largest Amish community, at Elkhart and Lagrange Counties, along with the sizeable next-door Nappanee settlement.

While that 80%-plus feels like it could be a bit high, the importance of the industry is clear to the eye as you drive around the several counties which comprise the Amish area. Here you’ll find factories of such major producers as Jayco, Forest River, and Newmar.

The local Amish economy to a great extent flourishes or suffers based on the fortunes of the industry. In fact, a majority of Amish under age 65 work in RV plants in the area.

This dependence sometimes leads to painful times – in 2009 in the midst of the recession and Americans cutting back hard on luxury purchases, Elkhart and Lagrange Counties had one of the nation’s highest unemployment rates – near a whopping 20%.

In 2013 I looked at the RV industry in northern Indiana in a post called “3 Concerns for Amish working in the RV Industry.”

Those concerns related to 1) money (an overabundance of spending cash), 2) unsavory work environments, and 3) the stress of fast-paced factory line production (and I probably could have added this heavy reliance on a single industry as its own fourth concern).


Factory work is quite different, with its fast pace and “unAmish” environment, from the traditional farm vocations we associate with the Amish (and for that matter, dairy farms are noticeably rarer here than in a place like Lancaster County).

So why have the local Amish been heavily involved in building luxury vacation vehicles for many decades now? Allison Yates looked at this question recently in an article for Atlas Obscura.

In the article, Steven Nolt from the Young Center shares some insights on how this came to be – along with comments from some local Amish (plus a few words from yours truly).

So just what does an Amish factory worker’s day look like – and how much can you make?

Year-round, Amish men go into work at 4:00-5:00am, riding into town in a bike or buggy, and working until they complete their day’s quota. The faster they work, the sooner they go home. In Newmar’s Nappanee factory, for example, once workers finish eight RVs, they’re done for the day. Some might not even have to work a full eight-hour day, and wages are relatively high—reported to be around $4,000 a month and up. 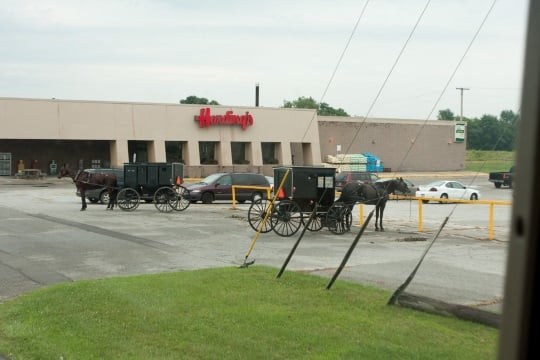 And how did the industry come to employ large numbers of Amish? Steven Nolt contributes an explanation:

When most Amish men were farmers, it was common for them to work seasonally with non-Amish in town, on more traditional things like cabinet making or carpentry, or even making cigar boxes, boats and band instruments. Nolt, who conducted interviews in the late ‘90s with Amish workers in the boat-making industry, said interviewees pointed to the fact that making the wooden boats was similar to wood working.

So when Milo Miller started the first RV manufacturer in Elkhart County in 1933, it wasn’t out of the realm for Amish to begin participating in the seasonal work it offered—something Nolt explained was an “already established pattern that seemed inviting.” And there were a lot of chances to participate in this industry. Miller’s company quickly started to attract more suppliers and manufacturers to the region. By 1948, Elkhart County had already been dubbed the “RV Capital of the World” and continued to supply America’s post-war demand for affordable recreation.

Yet, how did the RV situation shift from a comfortable, seasonal job for some of the Amish, to employing 56.3 percent of men in the Nappanee settlement and 53 percent in the Elkhart-LaGrange settlement, according to Nolt’s data?

The big reason, says Nolt, is what he called an “economic squeeze and demographic crisis,” a shift in the 1980s that pushed the Amish (and other farmers across the country) from the farms into the factory. By the time the 1980s Farm Crisis hit, Amish families had already grown larger and larger,and there were fewer opportunities for them to own land. Today, most people who own farms inherited them. Buying land and farming is not only out of most people’s price ranges, but it’s a tough business to compete with America’s mega-farms.

What do Amish think?

Nappanee resident Ola Yoder, an Amishman who owns a large wood products business, shared his mixed opinion on the industry: “The good thing is they put a lot of meat on the table and feed a lot of families” …The change it’s caused is “tremendous, and I’m not sure if it’s a good thing.”

An Amish RV worker also shared his thoughts on the drawbacks:

M. Yoder, an Amish man who works in a trailer factory in Shipshewana, said he doesn’t “like getting mad at all” but he can’t help but feel the pressure of the adrenaline. He’s had arguments with his superiors. The speed required has also made him wasteful–it’s easier to throw away excess materials in a time crunch than put them back where they belong.

To add a few more observations, a couple of our commenters recently weighed in on my original post with some insights. 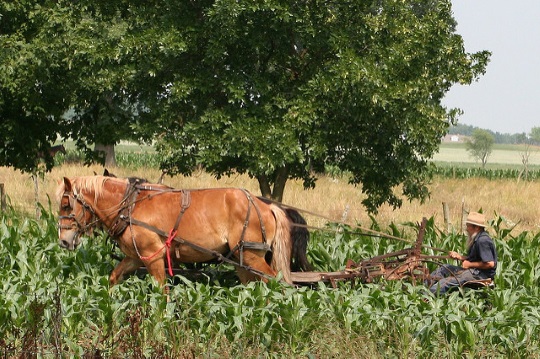 An Amish farmer in central Indiana. Farming was a minority occupation for northern Indiana Amish even by the late 1980s (see Plain Diversity: Amish Cultures and Identities, pp. 85-87 for more).

The RV industry is booming again in northern Indiana, as are the manufactured homes, but I’m not sure how it compares to the past since I’m no longer involved in it…Many younger Amish moved away when things slowed down, but appear to be coming back now. The Amish schools are bursting​, and another large one was built a few miles from me. I’m seeing more of the Amish pleasure riding horses again, and many more signs of affluence.

Next, Al in KY shares recent input on the industry and looks back at silver-lining perspectives during the recession years:

Earlier this year, I spent one month in a temporary position in that area and had interesting conversations with many Amish and Mennonites. When the conversations would turn to employment, the general consensus was that the financial situation among many Amish in the area is very good at the present, largely due to the booming RV industry. I can’t help but wonder how long this is going to last, and what will be the effects amongst the Amish in the area if the demand for RVs decreases like it did around 2008 and 2009 and many Amish people, as well as others, are laid off
again.

There are two very interesting articles written in the Fall 2009 Newsletter of Menno-Hof Amish/Mennonite Information Center in Shipshewana. One article was written by an Amish minister/former farmer/then an RV factory worker and the other was written by the Executive Director of Menno-Hof at that time. Both seemed to be saying that the layoff of many Amish from the RV factories was a “blessing in disguise”. The layoff was having a general effect of helping Amish people restore their connections to the land, and renew their focus on the strength of family, friends and neighbors. It would be very interesting to talk with these people who wrote those articles now (eight years later) to see if they think that the renewal of these values are evident today, now that many Amish have returned to the RV factories and have very good incomes.

The implication in Al’s summary of the Amish and Menno-Hof articles is that Amish had lost some connection to the land, as well as lost some focus on family and community, due to dependence on RV factories.

Do those two things automatically go hand-in-hand with RV work?  I agree with Al that more current perspective on how those values are being sustained today would be interesting.

The RV industry is deeply woven in the northern Indiana Amish economy. I once speculated that local Amish would shift away from being dependent on RV jobs following the pain of the late 2000s recession years.

Some did open businesses, but the industry is so ingrained in the community that when things look up again it’s easy to return to the factories, even if you have ambitions of a home enterprise.

RV work is its own tradition in this community, just as farming or woodworking is in others, and it looks like even large and painful unemployment shocks won’t do much to shake that.