Pennsylvania and Maine have been locked in a sweets skirmish the past few weeks.  The territory under siege is the famous whoopie pie.

Folks in both states have laid claim to the whoopie as the official state dessert.  If you can believe it, this topic has actually been debated in the Maine House of Representatives in recent weeks. 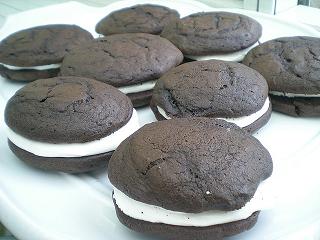 Personally, if I were a native Pennsylvanian, I’d say let them have it.  Whoopie pies have never been my favorite.  You get about halfway through one and it’s sugar overload city.

For the lowly whoopie is not the subtlest of desserts.  Slab of spongey chocolate cake, dollop of sickly-sweet white creme, another slab.  That’s it.

Perhaps sensing the crudity of their confection, some innovators have tried variations on the classic black cake/white creme pairing.  I once tried the peanut butter creme version.  Still had to stop halfway through. 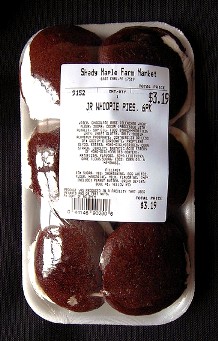 A package of Shady Maple mini-whoopies, safely behind plastic

Whoopie pies are like radiation or minor-league baseball–to be consumed in small doses, if at all.

Plus, it’s not like PA doesn’t have other desserts that might fit the bill as the state’s finest.  And that’s not even considering the non-Amish/PA Dutch ones I’m less familiar with.

I’m not sure what else Maine has though.  Lobsterpops? (As it happens, there are 3 Amish settlements in Maine–hardly Lancaster County, but the only Amish in New England) In an act of compromise, yesterday Maine legislators approved calling the whoopie pie the official state “treat”, rather than “dessert”.

Whatever.  They apparently want to make their mark so badly they’re constructing a 500-lb whoopie pie, double the largest whoopie whopper Pennsylvania has ever erected.  So all things considered maybe this is one that PA people just need to back off on.

As for my home state of North Carolina, there’d be a lot to pick from for state dessert.  But in the end I think I’d nominate a simple classic–the Krispy Kreme doughnut. 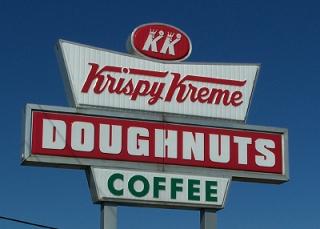 Krispy Kreme stores are found in countries such as Australia, Lebanon, and the Phillipines

Why the Krispy Kreme?  The company was founded in Winston-Salem in 1937, and they’re still headquartered there today, so that gives NC a pretty strong claim.

I realize this is more a brand of an archetypal dessert–the doughnut–but the classic Krispy Kreme is an international icon.

When you think “Krispy”, you think of the standard plain glazed–not like Dunkin’, with its cornucopia of constantly-changing flavors.  The Krispy Kreme is simple like the whoopie pie, but distinguished by its subtlety and lightness. 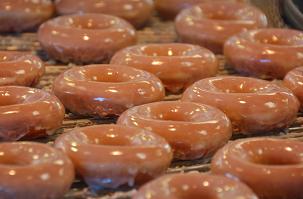 Plus, unlike the whoopie, they’re highly edible.  They’ve got the perfect level of sweetness–just enough to complement a morning coffee, but not enough to whoop you into sugar catatonia.

Served warm, there’s just not much that kompetes with the Krispy.

So what about your state?

Do you already have an official dessert?  If not, what should it be?