Interpreting for Amish in court

In this latest case (the third this year in KY, in Logan County), four Amish, including one woman, have been cited for not displaying the orange triangle.

Even though Amish speak English from a young age, and many very capably, we might forget it is still a second language for them.  I speak Polish as a second language, but I’d feel at a distinct disadvantage trying to follow along with legalese in a Polish court, for instance.

No doubt complicating things is that this group is not represented by an attorney.  Also of note is that the defendants are from a conservative Amish background (likely a Swartzentruber group, though I haven’t been able to confirm that).

Not all Amish schools are the same.  The level of education can vary depending on the orientation of the group. In more conservative Amish schools, children tend to receive a lower level of language training than Amish schoolchildren from more progressive groups. 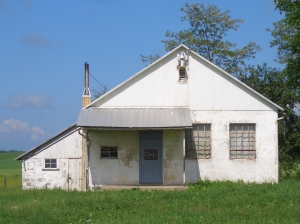 Karen Johnson-Weiner, who has done extensive work on both Pennsylvania Dutch language and Old Order education, explores this topic in Train Up a Child: Old Order Amish and Mennonite Schools.

Karen notes that Swartzentruber Amish learn “an English no longer spoken by their non-Amish neighbors” (p 59).  Vocabulary taught in Swartzentruber schools, typically based in outdated school texts like McGuffey’s Readers or the circa-1919 Essentials of Spelling, is archaic (p 58).

Much of it, she notes, is “of little use” in practical matters.   For example, sixth graders “memorize for spelling tests such words as “luncheon”, “telegraph”, “madam”, “trolley”, and “piano””.

Eighth graders must tackle “words no longer used by their English-speaking neighbors, including household terms such as “emetic,” “gimp,” “chiffonier,” and “poultice,”; industrial terms such as “magneto” and “adz”; urban terms such as “jitney” and “linotype”; and rural words such as “Bordeaux,” “sulky,” and “whiffle tree”” (p 58).

There are a number of reasons these texts are used, including “reinforc[ing] a sense of continuity in the community” (p 60).  The net result, though, is that graduates of these schools are likely to have a weaker grasp on the English language.

Thinking in a foreign language

Still, conservative Amish or not, a second language is a second language. Karen quotes an experienced Swartzentruber schoolteacher: “[It] still comes the handiest for me to talk German because that’s the language we use the most” (p 55).  I’d bet most Amish, regardless of church background or occupation, would agree with that statement.

I recently asked someone from a much “higher” Amish group whether dealing in English still “felt” like using a foreign language.  She replied that it did, and that she thinks in PA Dutch, even though she does much work  in English.

I rarely think in Polish, which I began learning about 13 years ago.  I sometimes get close to it, say if I only use it for a few days in a row, like when I’m with family who speak no English.

I’ve always admired people who seem to flow with foreign languages effortlessly.  Even though I can handle a lot of what’s thrown at me in Polish, I don’t belong to that group.