If you’re not familiar with the term “Amish taxi”, this refers to a service common in Amish areas of size. 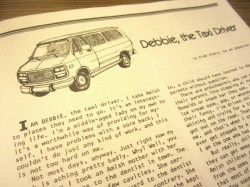 You’ll see ads for Amish taxi drivers posted on local bulletin boards, and every Amish family (where available and sanctioned by the church) will have at least a few numbers of drivers on hand.

We previously looked at the story of Amish taxi driver “Debbie”, heard about one Lancaster driver with a four-decade career, and also considered them one of 5 key people Amish depend upon.

As the story of Debbie related, taxi driving gives its own specific perspective on the Amish. One excerpt:

“You soon get to know the people who are “regulars”. There’s one couple that always brings me a coffee when they stop for one. Oh, that’s so nice! I can’t afford to treat myself every time someone else wants something, but I sure do appreciate being treated. Especially with the aroma of someone else’s cup of coffee teasing my nostrils.

There’s another thing I’ve noticed. You’d think the people who are well-off would be the ones to give you a tip every now and then, but not so. A young wife and mother recently slipped me an envelope with a generous donation inside. I know they’re still struggling to make farm payments, so I really appreciated and felt unworthy of the tip.”

Amish taxi driving is popular among retired folks who might appreciate extra income. Others make it a full-time occupation.

To be an Amish taxi driver, however, you are subject to regulation – in various forms depending on the locale. These include safety checks.


As far as inspections go, Amish taxi drivers in the Geauga County (northeastern Ohio) settlement are recently complaining of “targeting” by local law enforcement. From newsnet5.com:

MIDDLEFIELD, Ohio – A group of Amish taxi drivers, who serve the Amish in Middlefield, Ohio claim, in some cases, the Ohio State Highway Patrol is unfairly pulling them over for safety checks if they see Amish passengers in their transport vans.

Dale Eloph, who transports Amish passengers 10,000 miles every month, believes multiple drivers have been pulled over without probable cause, simply because Amish passengers can be seen inside the vehicles.

“They’ve been told to pull them all over, pull everybody over. ‘If you see a hat or a bonnet, pull them over,'” said Eloph. “You can’t just pull cars over just because there’s a certain group of people in your vehicle.”

Eloph believes the increased scrutiny will make it tougher on Amish taxis drivers, who are already working on a thin profit margin.

He believes it will force some drivers out of business, limiting needed travel options for the Amish, who won’t drive because of their faith.

Here’s the report from News 5 Cleveland:

Did you notice the contrast in the appearance of vehicles that the producers used in the above video? Going by appearance alone, I’d opt for driver #2.

I wonder if the reason driver #1 is getting pulled over might be less about the hats and bonnets, and more about the large rust patches on the side of his vehicle.

Driver #2 compares Ohio to Pennsylvania, where rules are more onerous:

“No chauffeurs license in Ohio, you don’t have to have it inspected, no registration, no nothing,” said Comer. “There are some vehicles on the road that should be inspected and probably shouldn’t be on the road.”

On that note, on more than one occasion I have heard one Lancaster Amish friend, a market stand owner whose family uses a non-Amish driver four days a week, comment on the high level of oversight in his area.

Taxi drivers are one group of non-Amish people who depend upon Amish communities to make a living.

Of course, the dependence goes both ways – if Amish taxis suddenly disappeared, doing business, keeping up with family, and taking care of basic needs would immediately get a lot tougher for many Amish people.

Safety is important of course. Striking a reasonable balance between safety and freedom is the goal, so that drivers can continue to safely provide this valued (note: I first wrote “needed” here, but some others might not agree…) service.