Do the Amish use computers and the internet?

Amish use computers and go online in some cases

The Amish and computers can seem a strange pairing.  Yet as they’ve increasingly engaged non-Amish society—and as technology has become smaller and more portable—Amish have come head to head with technologies we wouldn’t normally associate them with.

Amish generally do not own computers

A key element to understanding the Amish relationship to technology is the line Amish draw between ownership and usage.  Some technologies are viewed as harmless and even beneficial.  Flashlights, calculators, and washing machines would fall into this group.

In other cases, Amish feel that ownership of a given technology holds greater threat to the integrity of their families and communities, than usage alone.  At the same time there are some technologies and some ways of using them that would be forbidden even in this case (ie, driving rather than riding in a car).

By this token, Amish typically do not own computers but may be permitted to use them (though this line may be blurring as well, with evidence of some openness to ownership).  In some cases, Amish may use computers in non-Amish workplaces and have email accounts in order to keep in touch with customers.  And in a few cases, some Amish businesses make use of computers as well.  Thus some Amish get exposure to computers and the web.

The versatile cell phone, which adds feature after feature with each succeeding generation, is another way the internet has entered Amish society.  Cell phones have become quite common in some Amish settlements, found in the pockets of both Amish youth and adults.  While certainly not all Amish own them, the percentage that do is significant and growing.

Amish entrepreneurs are among those who often own mobile phones.  Amish businesspeople typically view cell phones as useful and even indispensable in some cases, as in the example of a builder who may need to stay in touch with employees and customers while traveling between job sites.  However, not all Amish would agree that they are so necessary.  Thus cell phones remain an object of controversy.

Part of the concern over cell phones is the ease of access to the internet, as Amish fear exposure to online pornography and other influences detrimental to living a Plain Christian life.  Particularly worrisome to some parents, cell phones are commonly found among Amish youth in some communities.

As a side note, one might surmise that the popularity of cell phones with today’s youth may result in higher cell phone acceptance across Amish society in future, as today’s Amish youth become adults and join the church.

Amish getting online with third-party help

Some Amish businesses, particularly furniture makers,  have perceived a need to be online in order to more effectively compete in the marketplace.  As having one’s own web presence is typically frowned upon, Amish who wish to be online typically will go through a third party, often a non-Amish person who sets up and operates the Amish business’s site.

This provides a layer of insulation and at least symbolically signifies that the Amish feel casual internet usage to not be acceptable.  Having a third party handle it also reduces the potential to be exposed to worldly influences on the web.

Some Amish businesses also sell their products through vendors who operate their own online sites, another solution to the challenge of reaching an American populace doing an increasing amount of business online.

A Word-processing compromise: The Classic

Some Amish businesses have seen a need for word processing power, as well as access to useful organizational tools such as spreadsheets.  An enterprising Mennonite businessperson began some years ago to market a machine known as “The Classic”—a bare-bones contraption offering only basic functions. 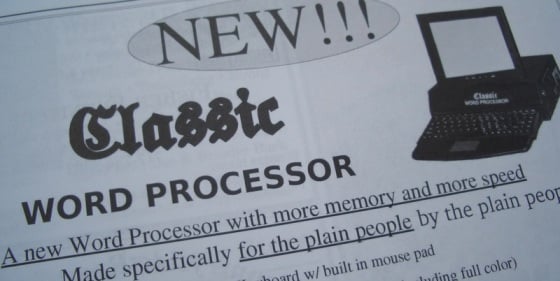 An advertisement for the Classic word processor

Ads for the Classic boast of it having “no games or gimmicks”, interestingly making a selling point out of features the product lacks.  The Classic has become accepted and even popular in some Amish church districts, which may recognize the usefulness of computers but don’t want access to the internet or graphical programs.

Amish holding the computer at bay?

At the same time, it is highly unlikely that there will ever be widespread adoption of the home computer or internet by the Amish.  The computer is considered along with the television and phone as a direct connection with the outside world that has no place in the home.  Some Amish will continue going online to a degree, facilitated by cell phones and other devices, but resistance to acceptance of computer technologies is likely to remain fairly strong in Amish society.

Amish Enterprise: From Plows to Profits, Donald B. Kraybill and Steven M. Nolt