Can Amish use Cell Phones?

Amish depend on phones to communicate and do business, but restrict their use

Amish are known to reject telephones in the home.  Yet in recent years, the image of an Amishman speaking on a cellphone is an increasingly common sight.  In reality, the Amish approach to telephones is a complicated one, taking in a variety of practices.

Why do Amish reject telephones in the home?

The historical rejection of telephones goes back to the early 1900s.   As this new technology proliferated through the American rural countryside, Amish initially installed phones just like other Americans.  Shortly thereafter, Lancaster Amish decided to ban it, and this ban has remained a part of the Amish Ordnung since 1910 (Riddle, Kraybill, pp190-191).

The home is the center of Amish life

Reasons for the ban likely included the fact that telephones represented a direct line to the world, offered too much convenience, and promoted gossip.  Diane Zimmerman Umble has also noted that phone conversation decontextualizes the Amish institution of “visiting”, weakening this common practice crucial to maintaining codes and standards of Amish life (Holding the Line, Zimmerman Umble, p.107).

Phones in the home continue to be rejected today, due in part to the symbolic connection to the world but also to preserve the institution of the home.  Too much phone usage, as any parents of teenagers may be able to attest to, can compromise family life and time spent with family in general.

At the same time, Amish recognize the usefulness—and in some cases, indispensability—of telephones.  While installation of phones in homes was banned, usage of phones never has been.

Amish need phones to communicate with relatives and other Amish in distant settlements, to conduct business, and to arrange rides through Amish taxi services.  Practially speaking, Amish depend on phones in many areas, even more so today as many Amish are involved in businesses that engage the non-Amish world.

Though Amish in some communities may rely on non-Amish neighbor’s phones, particularly in emergency situations, most Amish have developed ways to use phones while still keeping the potentially threatening technology at arm’s length. 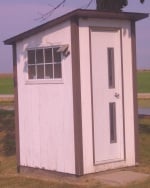 An Amish phone shanty in Ohio. Inside is a notebook for recording calls

In most Amish church districts, the use of phone shanties is permitted.  Phone shanties are located at the end of a lane or by the rural road, where they are often shared by a number of Amish families.

Typically a small wooden structure resembling a ticket-taker’s booth, the phone shanty typically contains a telephone, phone book, pen and paper, and call log.   Amish record calls made and settle up the bill at the end of the month.  Nearly all Amish will have a voice-mail answering service, and will periodically check messages on the phone.

Having the telephone shanty away from the home maintains a degree of separation but allows the technology to be used when needed.  Its distance from the home also discourages unnecessary calls.

Other Amish may have a phone in a barn or located outside a business, or even inside a shop or office.  Amish typically have allowed higher degrees of technology in the workplace than they have in the home.

By allowing phones in a barn or business, the barrier between home and phone is maintained, though in many cases this means the phone has crept a bit closer to the Amish dwelling place.  Allowances for the telephone varies among Amish churches.

The Amish and cell phones

Amish usage of mobile phones has increased over the past decade.  In some communities cell phones have proliferated to the point where high numbers of Amish youth have them, along with adults.  The cell phone, some Amish feel, is dangerous in that it is easily concealed and always with you.  Others see advantages with it over a stationary line, noting that the owner can always control who uses it and when.

Some Amish parents exhibit concern over what internet-equipped mobile devices may be used for.  Since the cell phone is so small and portable, it has in many cases crept in “under the radar” in some Amish settlements.  Some Amish, both youth and adults, have internet access as a result.

Wide usage has led to acceptance by default in some cases, as once a majority of church members are using a particular technology, it becomes more difficult for church leadership to speak out against it.  The cell phone remains a controversial but increasingly accepted means of communication in some Amish communities.

The telephone as necessary evil

Regardless of how an individual Amish church district may choose to handle telephones via its Ordnung, many Amish agree that phones are a necessary tool.  Whether maintaining ties with a distant sibling, keeping in contact with customers or suppliers, or checking weather reports, Amish find the telephone indispensable in both business and social realms.

The fact that the Amish choose to regulate how the phone is used shows continuing concern over potential ill effects, were it to be fully accepted.  At the same time the Amish take a practical approach in using the telephone in limited ways, as they do with most forms of technology.

Amish Online Encyclopedia: Do the Amish use computers and the Internet? and Do Amish use technology?

9 responses to Amish Cell Phones
Leave a reply to Do Amish use Cell Phones?