I’ve got some nice photos shared by readers over the past months, which I’ve been wanting to pass along to you. We’ve also got one piece of writing. Here we go!

That post was based on photos and comments from another reader named Tom. These two shots are from the original post on his visit to Mahlon’s shop: 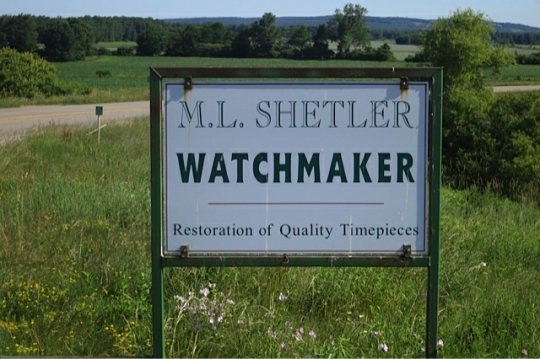 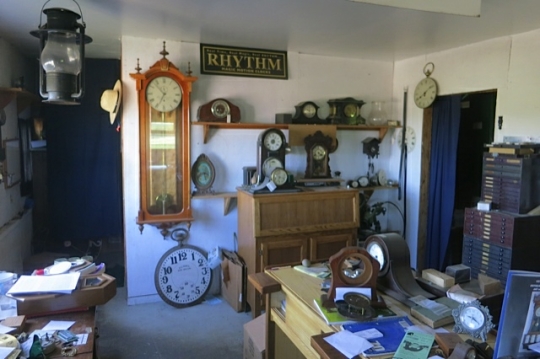 Mahlon does a lot of high-end work on clocks and other timepieces including pocket watches. Love the look of that shop.

Reader Dave Nelson shared the following comment on the original post, and also sent along a couple of photos of his own:

I used to live in Chautauqua County a few years back and visited Mahlon often. He made pocket watch parts for me and also repaired the more complicated issues for me.

Mahlon and his workers called me the wind-indicator man because I took him a Waltham Vanguard size 16 with 23 jewels and the wind-indicator option for repair. He made a new pallet fork for me and serviced and timed the watch. As always he did outstanding work.

I purchased a 3 weight wall clock from him that he made for someone that did not end up buying the clock. I still have it and it still chimes away every 15 minutes. It is an amazing clock. I miss going to see him. You won’t find a nicer man or a better watch and clock maker anywhere.

This is the clock he made which Dave bought: 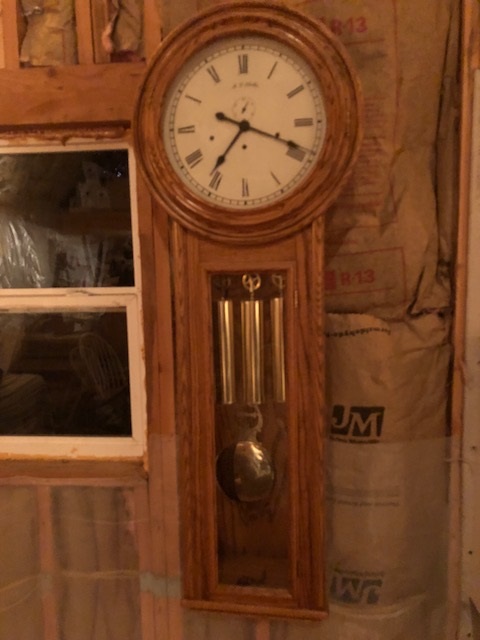 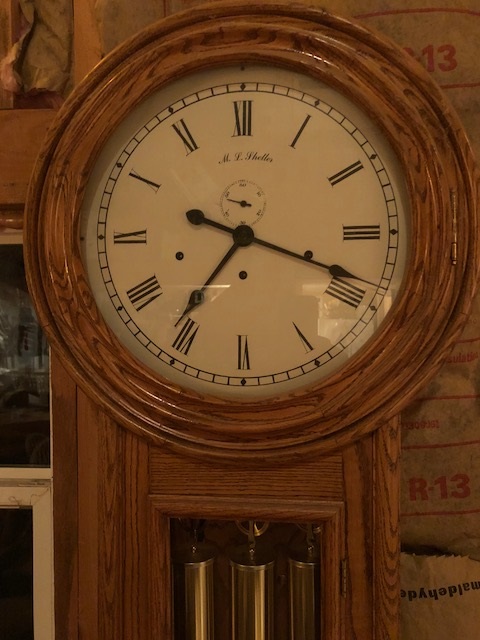 Looks like another great example of Amish craftsmanship. Mahlon sounds like a swell guy as well. Here’s the info for his business if you’re in upstate NY:

2. William Penn Letter – The first Amish settlers in North America came to William Penn’s land in the 1730s, following an opportunity to own their own property and live in religious freedom.

Reader Bob the Quaker, whose family has a historical connection to Penn, shares a land document signed by the man: 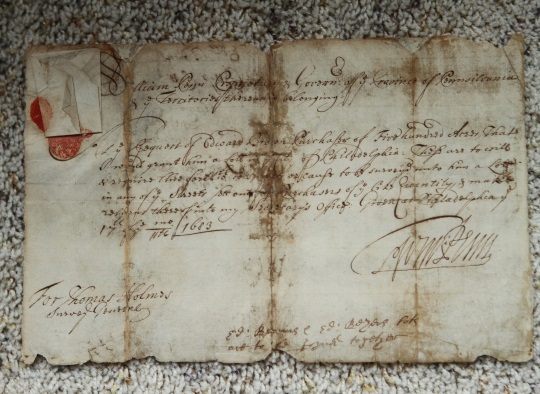 Penn realized those coming over would need a lumber mill & grist mill and Penn asked his good friend Caleb Pusey to build same. They put a pre-fab mill in the ship WELCOME as ballast & Penn & Pusey came over together on that ship. We have an original land document signed & sealed by Penn (attached). One of our Amish friends also has a land document signed by Penn, but I have never seen it. Caleb Pusey’s house still exist in Upland, PA, but the mills are gone.

Amish in Europe were mainly tenant farmers, not owning the land they farmed, and had endured a long history of persecution for their Anabaptist beliefs. The chance to farm one’s own land in a religiously tolerant atmosphere must have seemed like a dream.

She sent enough about the visit that I thought I’d publish it as its own post. But for now here are three shots from her trip. 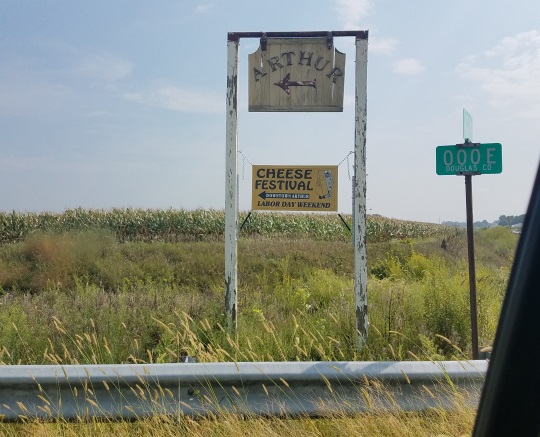 Next, buggies parked out front of the Otto Center, where the Mennonite Relief Sale was held: 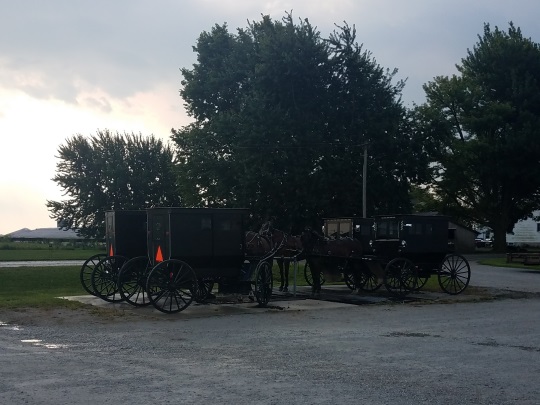 Finally, quilts from the sale: 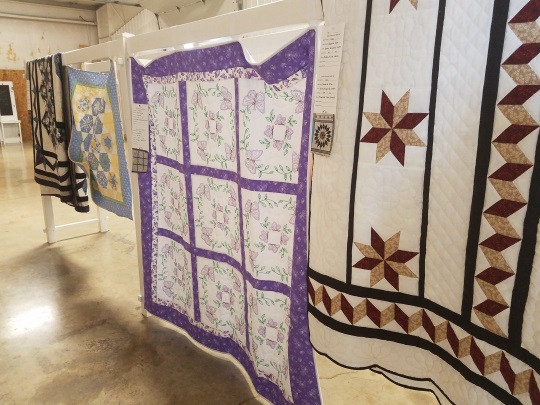 Arthur was the first place I really got to know the Amish, so always happy to see anything from that community.

4. Buggy License Plate – Bob, an Amish taxi driver, took this photo while in Shipshewana. The vast majority of Amish buggies do not carry plates, but some in Indiana do (more on that here): 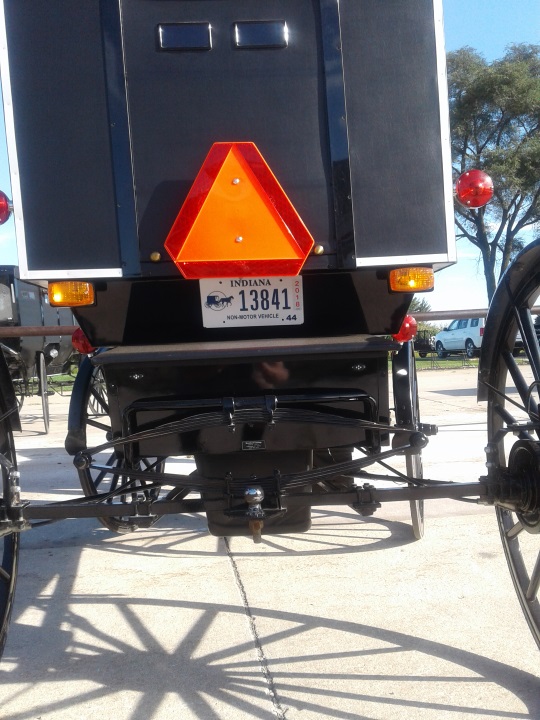 This plate is a bit different from others, with its Amish buggy silhouette/logo.

5. Making Change and Making Change – I’d also like to share one writing contribution. This is from Walter Boomsma, from his book Small People — Big Brains: Stories About Simplicity, Exploration, and Wonder

An important part of a recent vacation was spent in the Lancaster Pennsylvania area—also called “Amish Country.” When I lived closer, visits to the area were frequent and I developed a familiarity with the area. So this was an interesting opportunity to return after a decade of absence. There is much truth in the saying, “The more things change, the more they stay the same.” While there were some obvious changes to the area, it was equally obvious that many things have not changed. I have always avoided the heavily trafficked tourist areas and never shared the common perspective that Amish folks are a tourist attraction. I have always considered myself a guest among these special people.

One favorite back road farm stand had not changed much, although the attendant was now a nine year old Amish girl working alone indicating a new generation is now involved. She was pleasant and efficient, totaling up our purchases using a simple calculator. When I presented her with an unusual combination of bills and coin she pushed the calculator aside, took my offering, and counted back the correct change without hesitation. Watching her box our purchases cheerfully and carefully in the hundred degree heat was humbling.

I can’t help but contrast this with another experience several days prior. We ate at a restaurant where some of the servers were perhaps nearly twice my Amish friend’s age. Several of them couldn’t stop texting (or talking) on their smart cell phones while they were walking between the kitchen and their customers’ tables. They of course used computers to document our order and calculate our final bill. I did not test our waitress’s change making ability—credit cards have eliminated that need anyway.

The Amish are also among one of the most misunderstood groups of people, often considered “backward” and “out of touch.” The point of this contrast is not to demonstrate that–the point is quite the contrary.

I would offer that the Amish are actually quite progressive. What makes them “different” is that they are selectively progressive. (Remember, my young friend did use a calculator for part of the transaction. Not long ago a brown paper bag and pencil would have been the tool of choice.) The important distinction between the Amish and society in general is that the Amish only embrace technology after careful and deliberate consideration of the impact it will have on individuals, families, and the community.

One of my frequent observations that might parallel this is “just because you can do something, that doesn’t mean you should do it.” We are inclined to want the latest and best. Technology offers lots of temptations. Why watch that old TV when you can have a wide screen? (The Amish question might be “why watch TV at all?”) Only a few months to go and I can upgrade my smart phone to one that’s even smarter! The possibilities are endless, really.

While it would be possible and perhaps be nice to be able to order online from that farm stand in Pennsylvania (they make incredible pickles), I’m willing to concede that for this Amish family to embrace that technology would require some major changes in their lives. And for me it would mean that a visit a few years from now not only wouldn’t be necessary but wouldn’t be possible.

Call me backward and out of touch, but I’m not ready to give those visits up.

There could be a somewhat sad epilogue. Recalling this was written in 2013, the last time we visited the farm stand was gone, replaced with parking for the expanded furniture shop in the back.

Sad, but also makes the point, doesn’t it? Assuming it’s the same family (the furniture shop was always there—even when we first visited some thirty years ago) they did in fact “make change.”

If you’ve got Amish-related stories or photos you’d like to share, I’d be happy to hear from you.

Drop me an email at ewesner(at)gmail.com. Thanks to everyone who shared.