A Visit to The Amish of Halifax County, VA (18 Photos)

Like my visit to Enon Valley, PA in December, I only had a brief time at the Amish community at Halifax County, VA. I was returning home from my multi-state Amish trip after 2000+ miles traveled.

And as you’ll see from these photos, it was the end of the day. Still, it was worth the journey, mainly for one family I met while there. 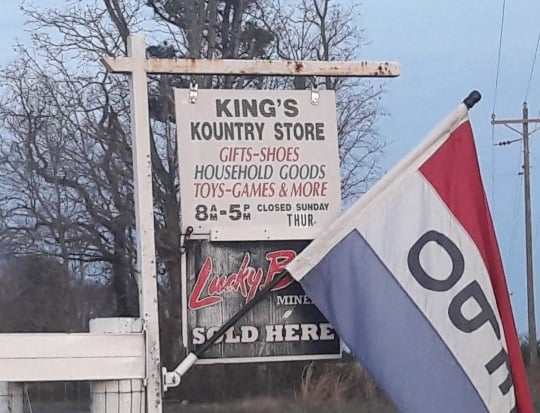 The Amish of Halifax County, VA

I had visited Halifax County once before, in 2011, and described that trip here. At the time, the Amish settlement was just one church district in size. I guessed then that here were maybe a dozen Amish homes in the area.

Today, they have two church districts, and about 70 households. I learned both districts are preparing to divide, so there will soon enough be four. The community has grown rapidly.

I was especially glad for that, as I’m from Raleigh, NC originally. So Halifax County would be the closest Amish community to my hometown, at around two hours’ drive (the two NC Amish communities, at Union Grove and Ellenboro, are a bit farther at around 2.5 and 3.5 hours respectively). 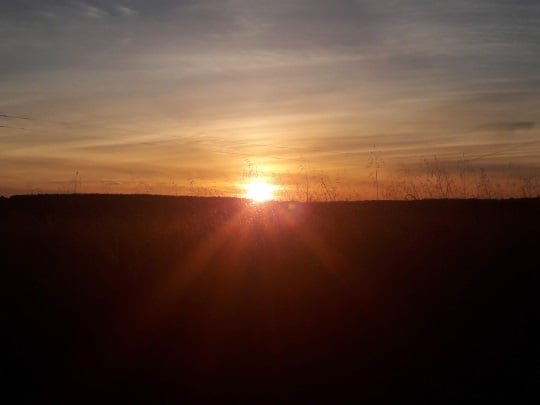 This is a Dover, Delaware daughter settlement, founded in late 2005. There are other Dover daughter settlements drawing Amish away from that community, which has undergone some land pressure, as it lies right next to the state capital.

On that note, when I visited the Dover community (also in 2011), I spoke with a woman about the situation there:

Though Emma was negative about future prospects, she didn’t foresee the extinction of the community.  “Do you think the Amish will eventually disappear?” I asked.  “No” replied Emma, “though I don’t really know why we stay here.”  She continued: “We don’t really have scenery here…a friend came and said all you have here are houses and cars.”

Still, something keeps Emma and others in place:  “We have been here a long time so I guess we have roots here.”

For those that do leave, I can see why the Halifax County settlement would be appealing. It’s about 6 hours’ drive from Dover, a manageable distance to be back-and-forth with their roots.

There’s scenery, though of a different sort than what you’d find in say, Lancaster County Amish Country. I’m sure land would be cheaper here as well, without the development pressures faced back home.

As my drive brought me closer to Halifax County, I came across a couple of noteworthy sights not far from the community. 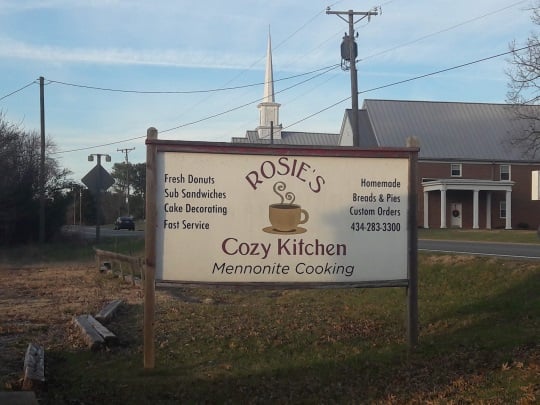 Rosie’s Cozy Kitchen looked like it used to be a mechanic business or garage of some sort. It was easy to pull off and stop, so I couldn’t pass this up. I picked up a piece of pie to take along. 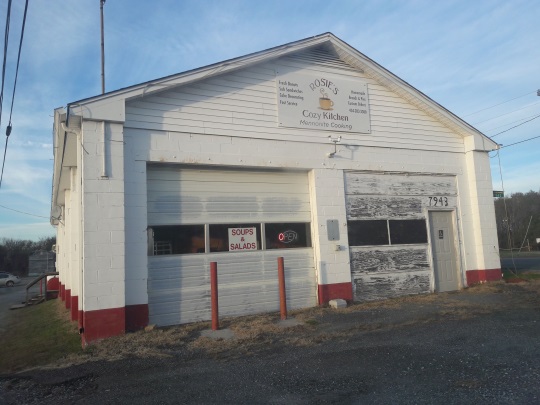 And next, also right on the side of the rural highway, a monster truck. Why not. 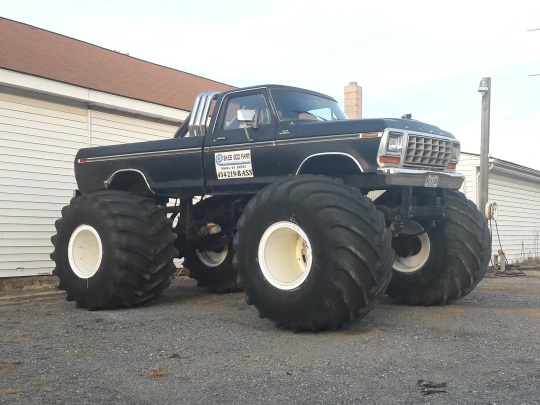 I think this was my first-ever monster truck sighting “in the wild.”

So, that’s probably not an Amish home. But I wasn’t far off.

Twenty-some minutes later, I had reached the community. Halifax County is rural with a lot of wooded areas. The town of Nathalie, mailing address for many of the Amish here, is barely a blip on the map.

Here are some old buildings in Nathalie. I really like old structures like these. In another era, this was the beginning of a downtown which never got much further than the two buildings you see here. 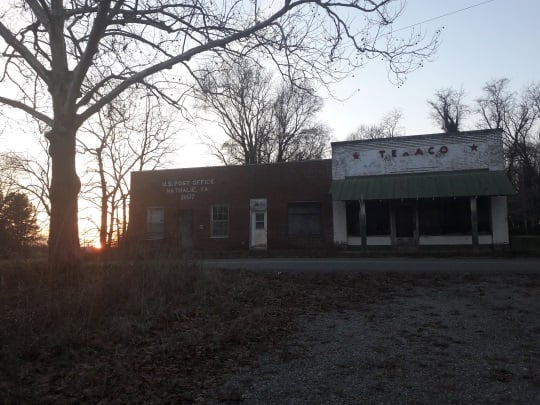 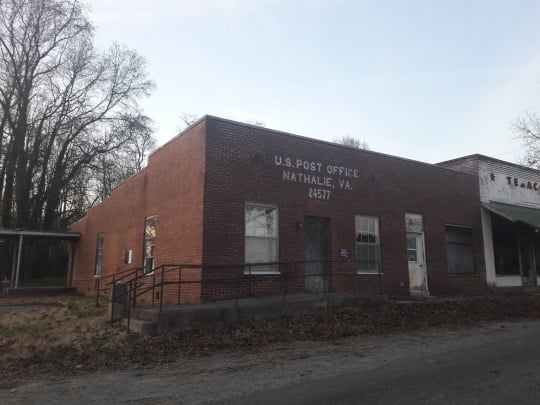 And its neighbor, a ramshackle, vacant Texaco building: 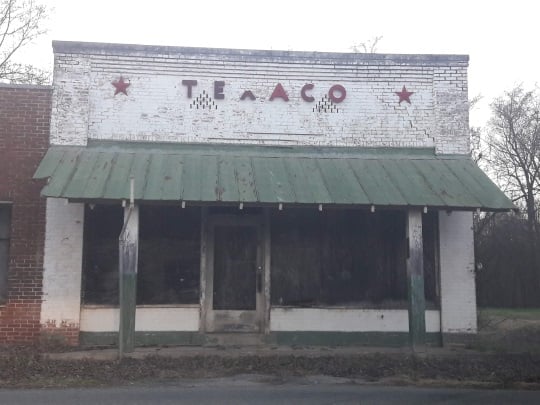 I don’t have a ton of photos of the Amish community here, due to the hour I arrived. But here’s an Amish school: 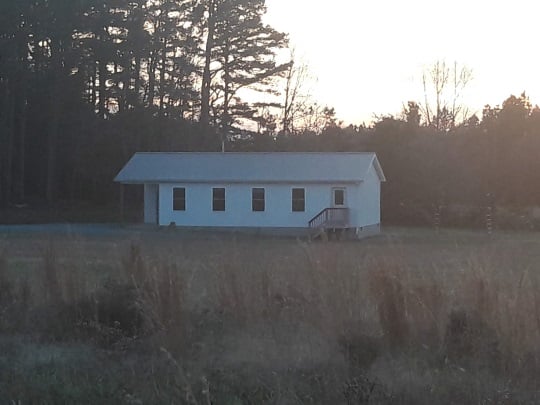 With outhouses out back: 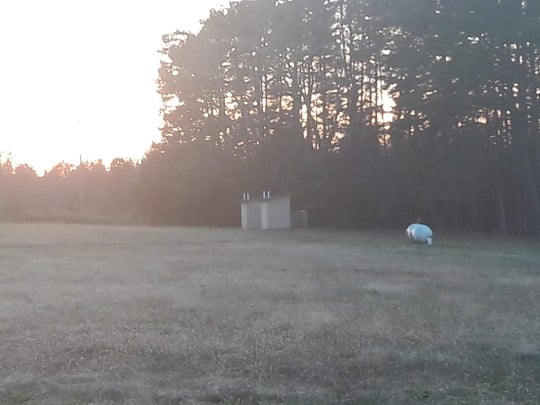 But I did have one memorable stop, at an Amish variety store called King’s Kountry Store. Here’s the sign out front, with the flag so you don’t miss it: 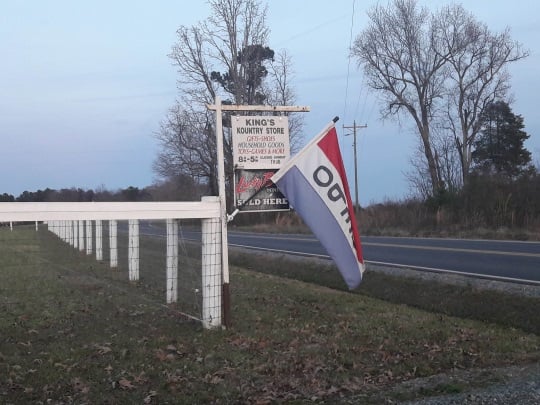 I pulled down the long lane and up to the store at 5pm, maybe a hair past the hour. I noticed the sign on the door had a closing time of 5pm. But since I was right about on the nose, I went in anyway, hoping that I could have a look around for at least a few minutes. I hadn’t come so far to leave without making at least one stop 🙂

There was no one inside at the time, as they were attending to a visitor at the house. But Mary King soon joined, followed by her husband Bennie about 5 or 10 minutes later. Here’s a very bad blurry shot of the entrance: 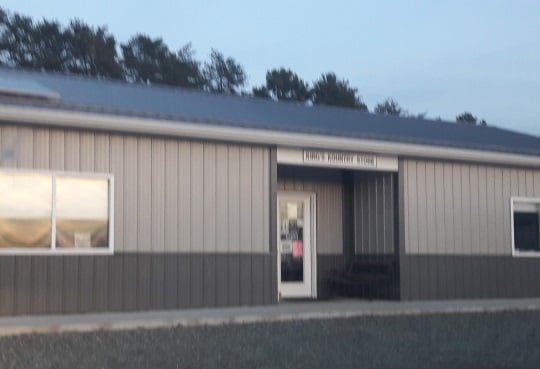 We had a really nice conversation for about a half hour. I explained that I had just returned from Pennsylvania, New York, and Ohio. It turned out we had one or two mutual friends.

They told me about the community, running the store, which they’ve had for four years (so it wasn’t around on my last visit) and so on. Really nice folks, probably in their late 30s/early 40s. One of their young daughters came over to say hello as well.

The Kings have a pleasant shop filled with all sorts of items you typically find in an Amish variety store. I didn’t get any photos, but on my next trip I might ask if I can do some store shots.

I happened to be running very low on cash, and with no ATMs around, I thought I might come away from the shop empty-handed. But it turned out I had just enough in my pocket to pick up this church directory ($6.99): 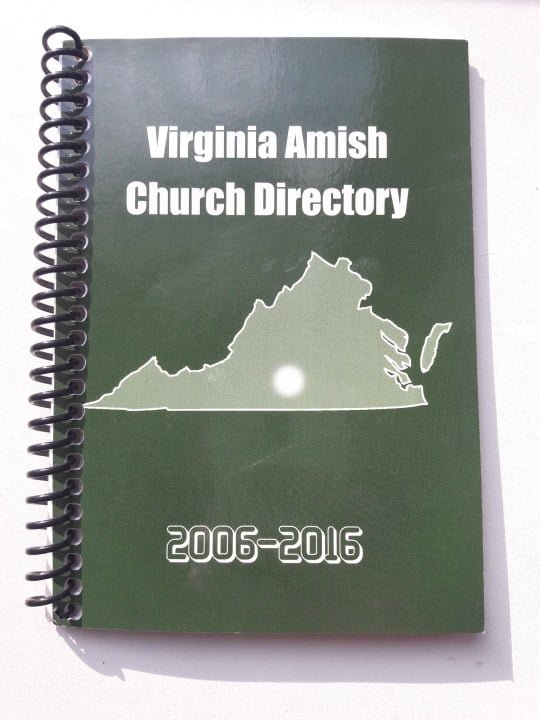 It’s a pretty standard directory. In it they give the story of this community’s founding, and some first happenings. There is also a letter from the very first family to move to the area.

If you are not familiar with Amish church directories, most communities of some size produce these. They typically list church members’ families, and have maps of their communities.

In this directory there are also sections covering births, marriages, and deaths, and families who moved away. The final page is a listing of the community’s businesses.

Note that this is from 2016, so information may not be completely up-to-date. Also King’s Kountry Store is not listed, so it’s not comprehensive.

But you can see there is quite a nice variety of businesses in the settlement, including building-related companies, foods, sawmills, a harness shop, a farrier, and even an auctioneer. 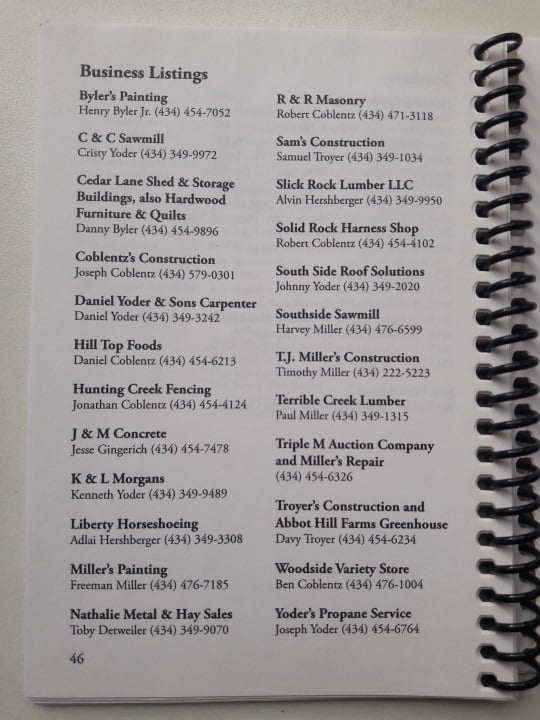 Bennie and Mary gave me a free calendar to take along, which is hanging on my wall now: 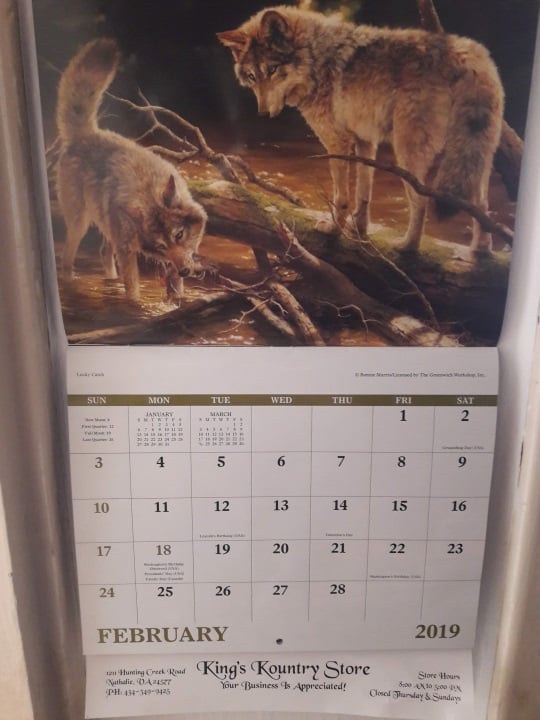 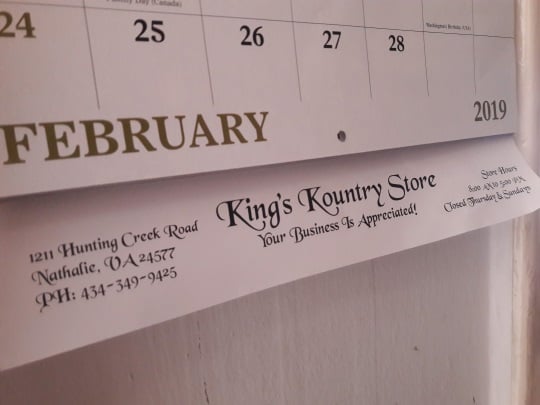 Here are the details for King’s Kountry Store if you’d like to visit:

Things were nearly dark by the time I left Bennie and Mary’s. Here’s a buggy sign I encountered on the road: 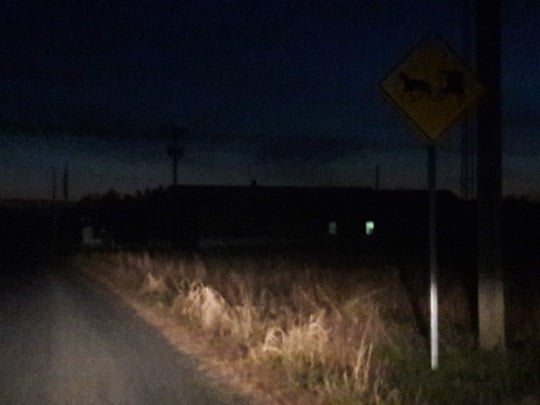 And a pedestrian warning sign. Note that it applies to the next 6.5 miles. That suggests this is an area where Amish live and there are going to be Amish adults and children walking on the road frequently. 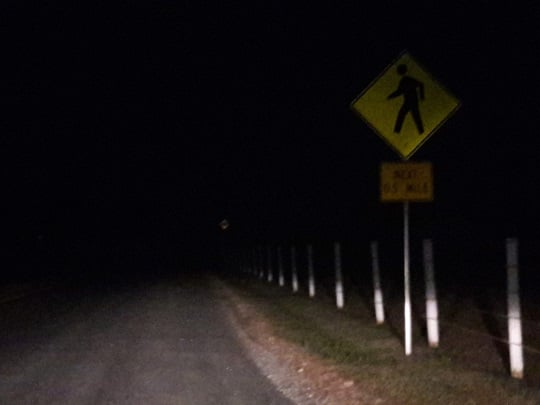 That’s about all I have this time, folks. Next time I’ll be sure to go earlier, and since it is near Raleigh, will probably just make a day trip of it.