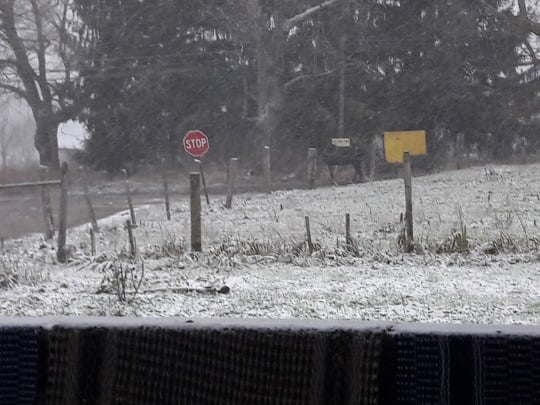 I explained in the follow-up that this unusual buggy was from the settlement at Enon Valley, Pennsylvania.

I had been wanting to visit this settlement for some time and had a chance to do so in early December, but due to time constraints, weather and darkness it wasn’t quite what I had hoped it to be – more of a drive-through visit. 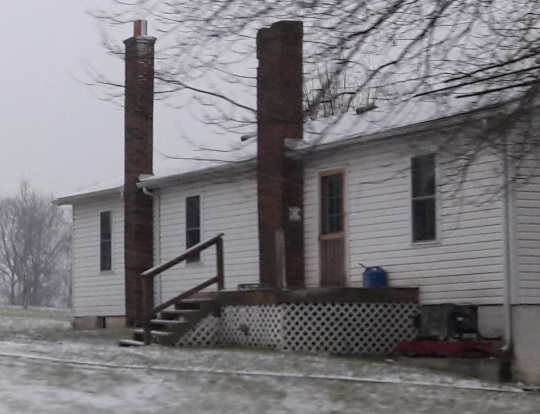 So I don’t have as much info to share as is the norm, and neither are these photos going to be of stunning quality. But you should get a bit of a feel for my visit and a glimpse of the settlement at least.

I drove over from Holmes County with snow coming down most of the two-hour journey. By the time I arrived dusk was approaching. 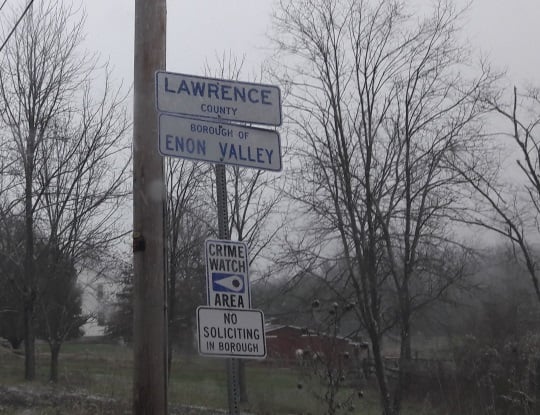 When in a new Amish area, business-signs are tell-tale indicators of Amish in the area. You can usually tell by the look – often hand-lettered – or the business names themselves (Amish are fond of using initials, or their easily-recognizable last names to identify their shops and stores).

Here’s a greenhouse sign, which looks suspiciously Amish. But is it? I don’t think so, as I came across a greenhouse which was clearly English-owned in that general direction. 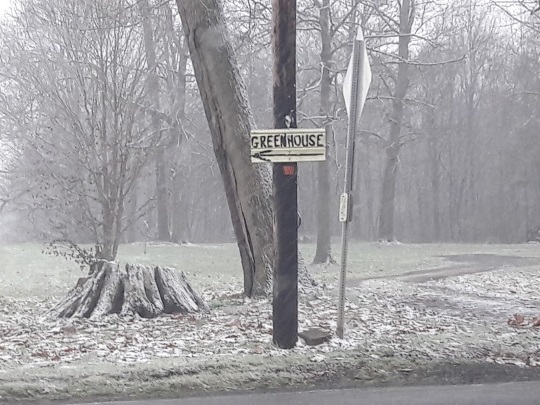 Enon Valley is an unusual community for several reasons:

1. The most obvious aspect is the buggy top color. As mentioned it’s not exactly the yellow of the Byler Amish of Big Valley nor is it the brown of nearby New Wilmington. To me it seemed more of a muddy yellow.

Another aspect of buggy color is mentioned in an Amishman’s writings in the 2003 edition of the New Wilmington church directory:

“The Amish in Enon Valley, PA still have their carriage box and gears kind of brown color, not black.” 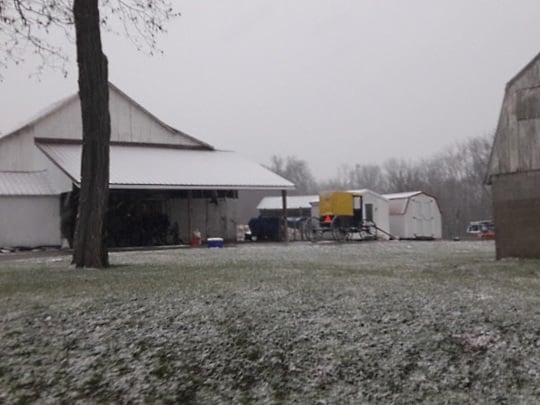 2. Enon Valley is 95 years old this year, but just one church district in size. Sometimes you see this – old communities that for whatever reason are a much smaller size than you might expect them to be (other examples include Oakland, Maryland, founded in 1850 and just one, albeit large, church district, and Kokomo, Indiana, founded in 1848 and just two churches in size).

Given Amish growth rates, settlements commonly expand over time. But some communities have complicated histories and may grow then shrink or never really grow much to begin with. 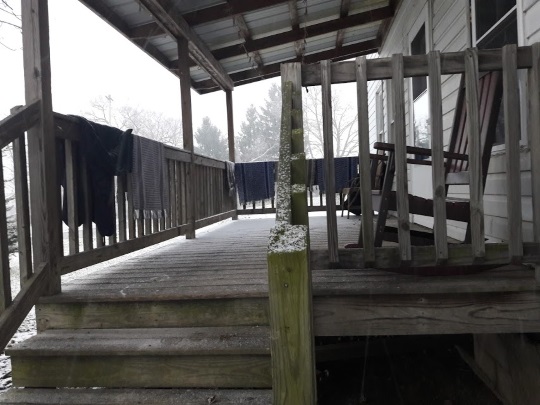 3. An Amish person quite familiar with the community shared with me a few other things, some of which shed light on the above. He said it was something like a fusion of the Nebraska Amish and the New Wilmington Amish (I am assuming he meant Ordnung).

He also described it as a “stepping-stone” settlement to higher churches, noting that if that were not the case, it would be very large, while currently he guessed it has only about 15 households.

He also said that for some time they even had brown wheels on their carriages, creating an unusual look, though black was accepted now.

And as far as that goes, though I had the help of Raber’s Almanac, it was a bit hard to find many Amish homes here.

The growing darkness and accumulating snow also made it difficult for me to find businesses or Amish people to talk to.

Here’s a buggy warning sign near the bishop’s farm: 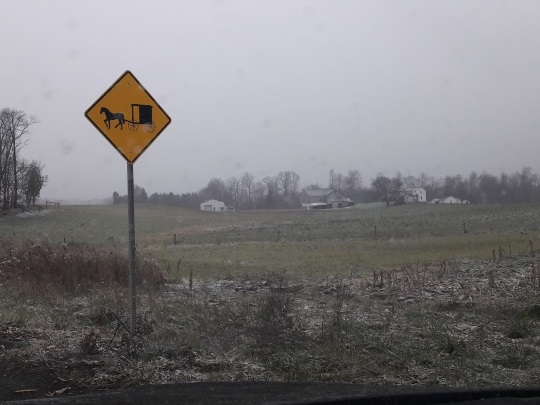 I did speak with one Amish woman and asked if there was a local store, a bulk food or variety store I could visit. She suggested one to me which I believe was actually in the New Wilmington community about a 20-30 minute drive north. So that suggested that there are not a lot of businesses here and truth be told it was hard to find many Amish homes, though I did spot at least one school. 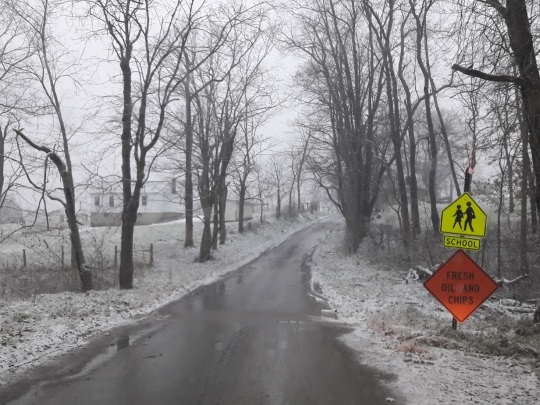 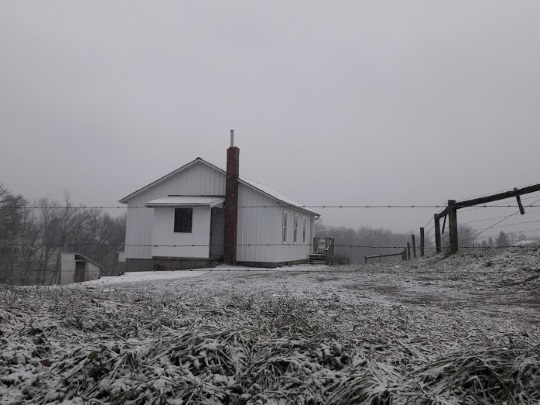 Here’s another buggy. It might have been the light but this one seemed to me to have more of a pure yellow tone compared to the others: 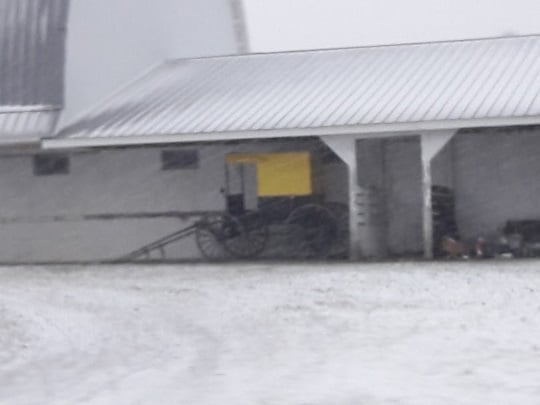 Blue door (also common to both the Nebraska Amish and New Wilmington Amish): 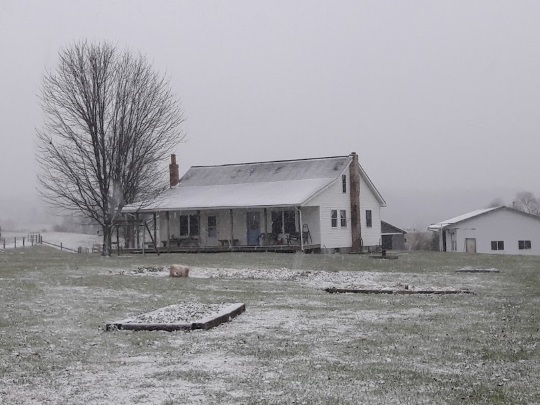 I also went by what at one time was apparently a minister’s home, and found a vacant place which looked at one time rather Amish but now clearly was up for sale. 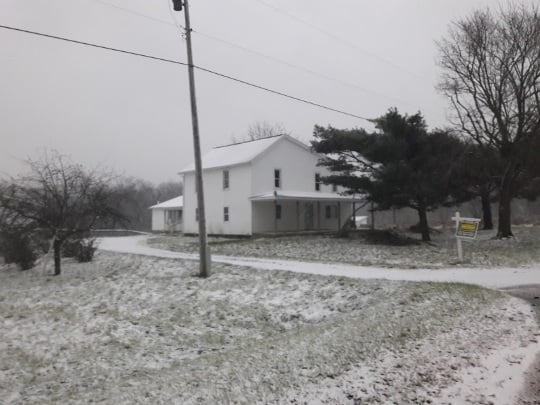 Here’s where the mailbox once must have hung on the opposite side of the road: 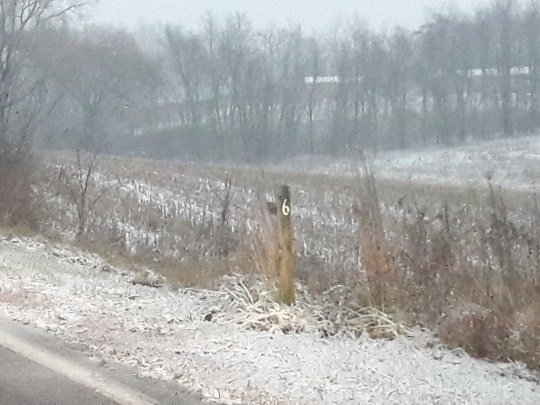 And a view from the other side, with buildings in the back: 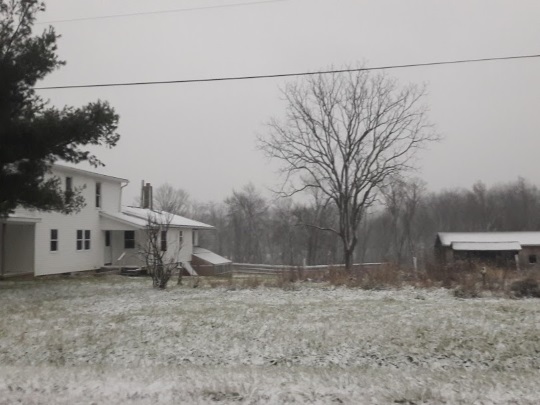 That’s about it for my visit. I’d like to return in the warmer months and spend a bit more time there. I spotted just one Amish business (storage buildings) but I would bet there are at least a couple others. It would also be interesting to learn more about the history of this atypical community.