Thoughts From 3 Amish Families In A New Michigan Community

Amish began moving to Manistee County, Michigan in the summer of 2018. 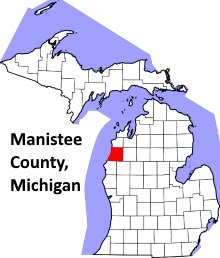 A year later, there are nine families in this county which borders Lake Michigan, with more expected.

In a nice article at the Traverse City Record-Eagle, three of those families share some insights on Amish life, and how they’ve adapted in the new community.

David is the bishop in this young community. He’s grateful for the concern by locals for his people’s safety.

The county road commission recently gave the thumbs-up to install 18 buggy warning signs. This will cost $6,200 (that figure jumped out at me – about $350 per sign).

David does carpentry work, and also has a kennel which breeds smaller dogs like pugs and yorkies.

Though the community has shown support for safety on the road, the code enforcement department is pushing for them to electrically wire their homes and buildings.

So while they’ve gotten backing in one area which reflects an understanding of their lifestyle, this other area might be a problem down the road. 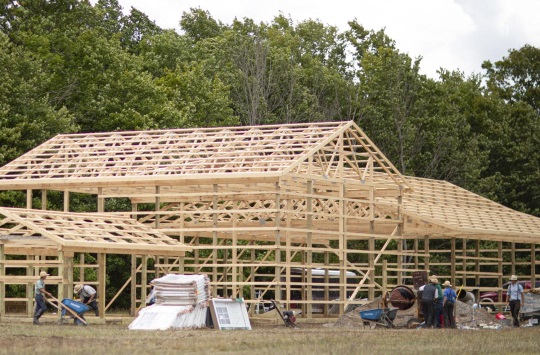 David’s wife Barbara bakes bread, pies and other baked goods, which are sold at a farmer’s market.

The writer notices that Barbara appears to be pregnant, though in keeping with Amish form this is not discussed, at least not in the piece.

The couple have seven children. David would like his businesses to improve so his wife can stop with the baking, since she already has heavy mom duties.

Like with other Amish families, technology looms as an exterior danger, which could creep in.

“I’ve noticed in the younger generation that they’re constantly playing with their phones,” explains David. “It just kind of goes to show what we’d have if we allow it.”

He admits it can sometimes be a challenge. As a father and a bishop, no doubt he’s spent time thinking about this threat.

Rebecca does most of the speaking here. Her husband Perry builds pole barns, and on Saturdays sells pies, rolls and cookies which Rebecca bakes, from a small stand in the parking lot of a local store.

The store’s owner built the stand, and does not charge the Herschbergers rent or any other fees from their sales. This seems like both a welcoming gesture, and a shrewd business practice.

“It draws customers. They’ve always got to have a beverage to go with their pie,” he explains. Seeing how people flock to Amish baked goods, I’d say it’s a wise move. The Herschbergers “sell a boatload” every Saturday.

Rebecca is mother to six children:

Rebecca’s greatest hope for her children is that they learn how to live with God, to have a happy family and to live near their parents so they can gather for meals. She also hopes they are content.

“We pray for them and just hope they will be satisfied with the way we teach them,” Rebecca said.

I read this as saying they hope their children will choose baptism and be content in an Amish Christian way of life. Something many, if not most Amish parents feel. 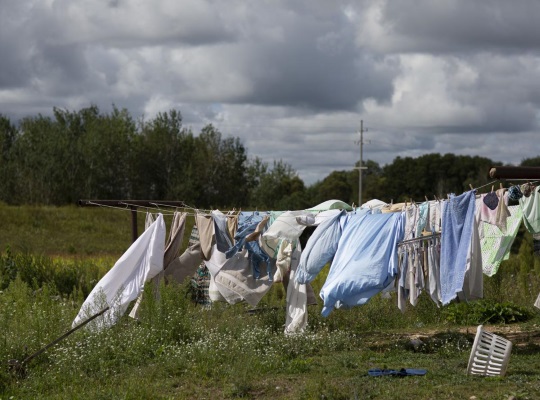 She is sometimes concerned by her people not living up to the expectations some might have of them. “I would not want people to think we’re perfect and be dissatisfied with us because we do make mistakes.”

A good reminder that the Amish are human…and another sentiment I’ve found you’ll hear often from Amish people when the topic arises.

The Millers have the largest family of the three – nine children, aged 13 months to 15 years.

Aden runs a sawmill, and had been buying wood from this area. I read this as a hint as to how the settlement may have started.

Amish sawmill owners may buy wood in a sizeable radius from their home community (see this book for more). The Millers came from the area of Stanwood, MI, about 90 miles away. Aden says he found land prices in Manistee County to be reasonable.

So the area got on his radar via his business. It’s not stated outright, but it may be via Aden’s wood buying that the community was founded. Or, he simply may have become aware of a fledgling community that happened to be starting up in an area where he happens to buy his timber.

Aden’s other comments mainly suggest that the locals have been very welcoming.

Once, a stranger stopped to help after his children were out in the buggy, and the harness broke. Another time someone drove by the buggy, and shouted a friendly welcome through the window.

Aden also values the efforts of the county in putting up the signs: “They are concerned with us being out on the road and we appreciate that.”

This was a really nice look at the settlement, and kudos to reporter Patti Brandt Burgess for getting good input from multiple families. I recommend reading it in full, at the link at the top.

Amish continue to find Michigan an attractive place to live.

There are currently over 16,000 Amish in the state, spread over 50 settlements. Most of those are similar in size to this one, having just one or two churches.

In fact, the Manistee County settlement is one of at least 10 new communities founded in the Great Lakes State in just the past five years.