To me, the Harvey hurricane and flooding disaster feels like it was ages ago, but it’s only been about five months.

Of course, for those still dealing with the aftermath, the hurricane’s catastrophic effects are clear and present every day.

Harvey displaced over 30,000 people and left $125 billion in damage, a figure comparable to the 2005 Katrina storm. 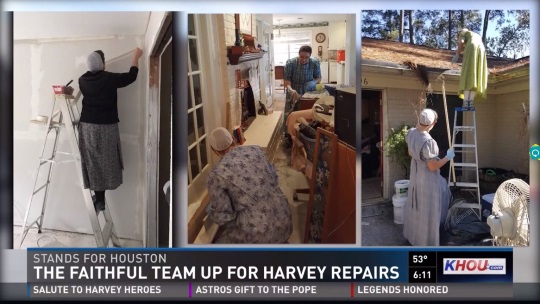 Thankfully, material support has poured in from around the nation. One source of support is Amish and Mennonite volunteers, of whom around 600 have journeyed to Houston to help rebuild since the late-August storm:

“They’re cabinet makers, or they’re carpenters,” said Scooter Buck. “And they’ll work until it gets dark. Show up, eat and do it again. That’s saving people thousands of dollars.”

Buck, who is leading the Harvey Relief Volunteer Group for Cypress United Methodist says some Amish men first came to Houston nearly six months ago to help the community.

“Next thing we know they started talking to neighbors and friends and relatives,” said Tony McCollum, pastor at Cypress United Methodist. “And now there’s kind of a lottery system to see who gets to come to Texas.”

In the last five months, about 600 Amish or Mennonite men and women have flown or driven to Houston.

They’ve come from California to New York and every state in between. They’ve tackled 120 homes so far.

Buck says it’s a savings of about $2,000 for each homeowner.


Amish and Mennonites have a long tradition of helping out after natural disasters.

Besides being appreciated by the storm victims, I think the volunteers get to have a special experience as well.

Apparently they’ve become fond of Texas’ own Blue Bell ice cream, mentioned at the end of this video.

Here’s hoping those still rebuilding will get all the resources they need and an accelerated return to normal life.