I Am Hutterite winners, and the Tale of Uncle Pete’s Dippity-Do

Last week’s interview with Mary-Ann Kirkby about her memoir I Am Hutterite got a nice response.  Some of us had just heard of Hutterites for the first time, while others had even visited Hutterite colonies.

In comparison with Amish, Hutterites are not very well-known.  This is probably due in part to their remote location in central Canada and the Upper Midwestern states. 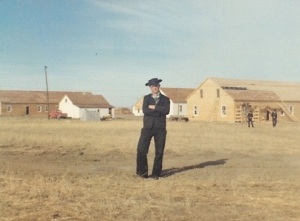 At a Hutterite colony under construction, 1962

I Am Hutterite is one of the highest-profile books concerning Hutterite life to date.  I much enjoyed it and recommend it.

For those interested in learning more on the subject, other good books include Hutterite Society, by John A. Hostetler, and On the Backroad to Heaven: Old Order Hutterites, Mennonites, Amish, and Brethren, by Donald Kraybill and Carl Desportes Bowman.

Backroad is quite interesting in that it examines commonalities and differences between these four related groups.  Taking each group individually, it is also a good general primer on these four strains of Anabaptism.

I Am Hutterite Winners

Time for the winners.  Using random.org, I selected 5 winners from among the comments on last week’s I Am Hutterite post and the “likes” on the Amish America Facebook page.  If you commented more than once, that is great, but for contest purposes I just counted the first comment. 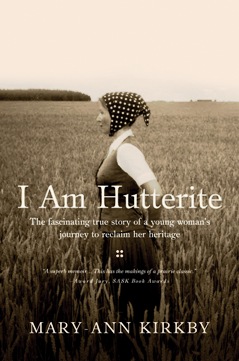 Congratulations to everyone, and please email amishamerica@gmail.com with the address where you would like your book sent.

I Am Hutterite excerpt

From I Am Hutterite, Chapter Six: Die Teacherin (The Teacher), by Mary-Ann Kirkby:

Just before school had started, my dad’s youngest brother, Jacob Dornn, had stolen my uncle’s beautiful, nineteen-year-old daughter Lena Maendel in the middle of the night.  At least that was Fritz Vetter’s version of the facts.  The commotion woke the whole colony, and lights flew on in all the homes as people strained to see the taillights of Jacob’s car and Fritz Vetter running over to our house.  Shouting from our hallway, he angrily demanded that Father have Jacob bring his daughter back.  Father, roused from a deep sleep, tried to get to the facts.

“Did she take a suitcase?” he asked, running his hand through his hair that had taken the shape of a stack of hay.

“Why?” Father’s brother-in-law shot back.

“If she packed her suitcase, then she went willingly,” Father said quietly.  The door slammed, and Fritz Vetter went home only to find Lena’s suitcase missing from under her bed and her clothes gone from her closet.  She was perfectly prepared to be “stolen.”  Young people “running away” from the colony before they were baptized for a taste of outside life was fairly common, but so was having them apologize and return because they couldn’t make the adjustment.  By morning, the story was percolating in the nearby colonies, and people were saying that’s what you get when you try to do good and bring in outsiders.

At least Father’s other brother, Pete, wasn’t coming to steal the women.  He just came to sell them…beauty supplies.  After leaving New Rosedale, he’d found work as a door-to-door salesman for the Rawleigh Company, selling household cleaners, spices, and hair products out of the back of his car.  He would arrive on Sunday afternoons, his trunk loaded down with jars, cans, and bottles of products from chicken soup base to hair gel to toilet cleaner.

The sight of half a dozen women bent over the trunk of a runaway’s car was more than the elders of the community could tolerate, for they were quite certain nothing good could come out of that particular scenario.  But Uncle Pete worked fast.  He was a born salesman, and he successfully convinced the women, including Mother, that they absolutely couldn’t do their hair without Dippity-Do when for five hundred years they had.  It was a pink hair gel with an irresistible fragrance and became a best seller among the colonies.

Pete’s trunk was as close to a hairdressing shop the women would ever come to, and the Dippity-Do for $1.50 made them feel that they could give those English women some competition.  Even Ankela fell for it, but she never used hers.  Every day she just visited her plastic jar of Dippity-Do and inhaled its flowery fragrance for a pick-me-up after her noon nap.

I Am Hutterite is available at many booksellers including Amazon.  And if you haven’t seen it yet, here is a classic documentary on Hutterites.