There’s a communication challenge Amish people deal with that most of us do not. It’s the fact that in Amish communities, names repeat themselves.

With a limited pool of surnames, and the popularity of Biblical and other traditional names, it’s inevitable that you find people with the same first and last names. 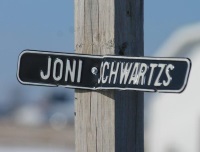 How many Sam Stoltzfuses are there in Lancaster County? Or Mary Lehmans in northern Indiana? Or David Millers in Holmes County? In some cases, dozens.

You can see the challenge this creates when you’re trying to talk about a specific someone, and not a different someone.

The Amish of course have practical ways to convey who they’re talking about. Karen Johnson-Weiner shares how Amish people do this in a Swartzentruber community in upstate New York.

Yesterday, I was at a local café having breakfast with my husband. Because the business also serves as the bus station, there is generally an Amish presence. That morning was no exception, for shortly after we arrived, so did the Trailways bus, and a Swartzentruber Amish man came in to call a cab. Unfortunately, he had forgotten to bring the address he needed.

Overhearing him (I admit to eavesdropping!) talking to Bill at the counter about needing to get to a road he thought was off of Route 68—but maybe not, I realized that no cab would be able to help him out. Since I was heading in that general direction to visit folks, I offered to give him, his wife, and their young son a lift. 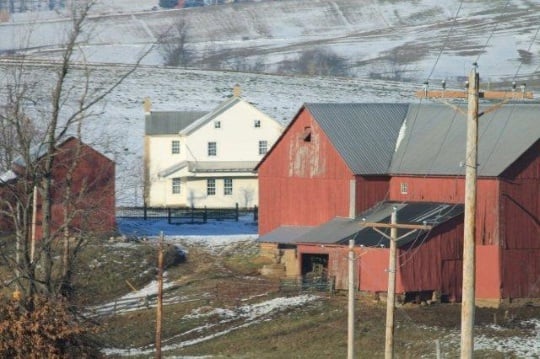 The Swartzentruber Amish don’t volunteer names easily in the way non-Amish folks do. We were about a mile out of town, when I asked him his. “Jacob,” he said. It took a little bit longer to learn that his last name was the ubiquitous “Swartzentruber.” Then I needed to pry for his father’s name so that I could have that all important middle initial.

The Swartzentruber Amish, like other conservative Amish groups, don’t use middle names. Each child has the middle initial of his father. This means, of course, that there are lots of folks with the same name! When it gets too complicated (i.e. the mailman is confused by three people with the same name on the same street!), a man might also use his mother’s initial.

This fellow was Jacob P., son of Pete. He had a metal hook for his hand, which he had lost in a mowing accident some years back, and we talked about how this served as a lesson for his children; his oldest, all girls, now help with the mowing. Waving his hook, Jacob laughed and said, “this makes them be careful.” 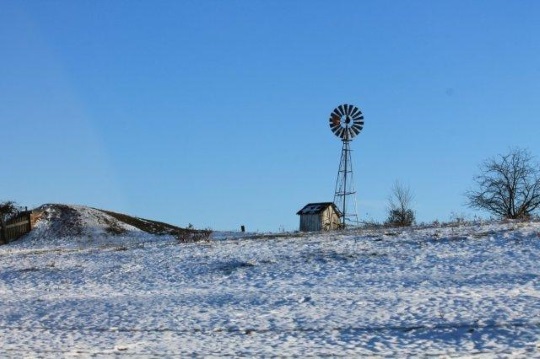 The small family was headed for the home of the wife’s brother, which we found easily, after I figured out that both Jacob and his wife were related to many of the families I see regularly, including the ones I had planned to visit that morning. After I dropped them off, I went on to a neighboring couple, who were, of course, curious about the visitors that I’d brought from the bus.

I gave them the meager bit of information I’d picked up in a 20 minute ride, and, while we drank coffee, they tried to place Jacob, son of Pete. Finally, the wife had it: Danny Petey Jakie. Then, she asked if he had lost his hand. I say yes. It turns out that both bits of information were necessary for them to know exactly who he was! There are lots of Danny Petey Jakies (Jacob, son of Pete, son of Dan).

We talked about names after this, part of the “name game” common when any new person arrives in town. The husband noted that, “Some new ones [first names] coming in” he says. “It’s not good.” I ask him about “Dennis,” the name of one new baby I’d met recently, which is a new one for me—but he said no, he had an uncle Dennis. How about “ Mahlon,”the name of another new arrival. “No, she has a brother Mahlon.” 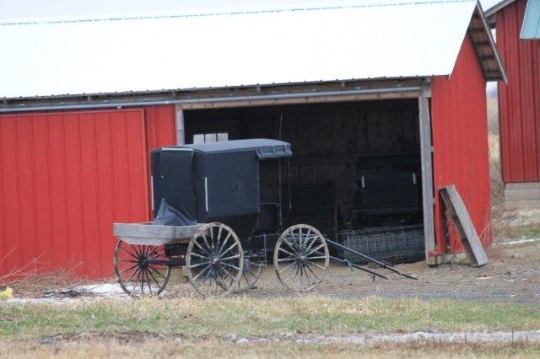 Talk shifted to “Sam” after the wife asked about my daughter (“Is she married now?”), now engaged to a “Sam.” She asked if we call him “Sammy” and says that’s what she calls her husband sometimes. The husband laughed and then the two debated about whether an adult would call another adult “Sammy”—apparently not if they didn’t grow up together. More likely, Sam said, they’d have a nickname, like his six-foot-tall relative, “Long Sam.” Of course, he noted, you could call someone “Long Sam” if he was really short too.

Later, at another home, the wife also tried, this time with her brother’s help, to place the visitor. This time I gave her all three names: “Danny Petey Jakie.” “Does he have a hook for a hand?” she asked.

I’ve run into what Karen describes more than once, which has you learning all sorts of distinguishing factors to avoid getting a blank look when you drop a name 🙂

I still believe the most difficult community is Daviess County, Indiana, where only six names make up nearly 90% of all surnames.

Have you noticed Amish names repeating themselves? How about any Amish name stories, or good nicknames you’ve heard?