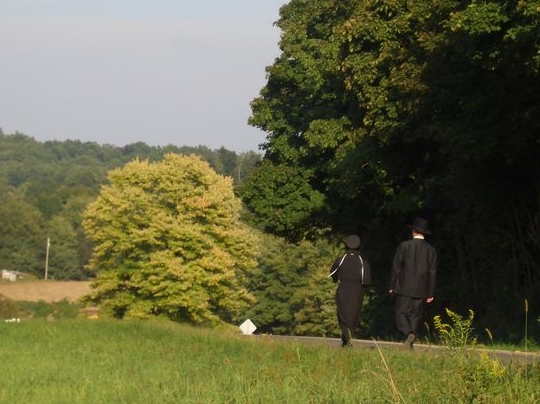 Amish Cook columnist Gloria Yoder just had a baby boy and is off for a couple of weeks. In the meantime, editor Kevin Williams chose a nice old column of Gloria’s to run while she’s on break – on how she and her husband Daniel began dating. First, Gloria describes the dating norms in her Illinois New Order Amish community:

I’ll first give you a brief outline on what dating is like in our community and how it is done.

Before starting any boy-girl relationships youth are expected to be at least 18 years old and a member of the church. The boy is always the one who leads out and makes the first step. After praying and seeking God’s will he talks with the girl’s father and asks for his blessing before proceeding in making contact with her.

Our mothers first met at a funeral when I was 10-years-old. Immediately there was a bond of kindred spirits. Being of similar church fellowship their family occasionally came for a visit and would also spend time with other friends in our community. Javin, my older brother, enjoyed when Daniel came to our house to spend time with him or were there perhaps some hidden reasons to visit?

I was very surprised a month after my 19th birthday when Mom and Dad asked to talk with me in private and announced that Daniel Yoder wanted to start a friendship with me. After spending time in prayer and seeking the Lord’s will we responded back to him with a positive answer.

I was honored. I had always respected him as a Godly young man.

After having a mutual agreement to begin a friendship a day is picked for the couple to have their first date. Generally it is kept as a secret until then. The boy will then take the girl from church to her house on a Sunday afternoon where they spend time together.

Daniel came to Flat Rock for our first date. He traveled with his brother who also had a girlfriend in our community.

After the Sunday services I nervously, yet eagerly, waited until it was time to go home. When the time finally came to leave we walked out to our buggy and helped each other hitch up the horse. It seemed like there were people everywhere watching us, most of them very surprised to see the two of us together.

We spent the afternoon at our cabin chatting, reading the Bible and praying together. After our date we joined the other youth for supper and a hymn singing.

Complicating things, the two lived 370 miles apart, with Daniel two states over in Ohio. Gloria shares how they managed this long distance dating, including one surprise. Read the column in full here.

This is one example of Amish dating, in a church group – New Order Amish – known for its stricter dating standards. In this case, that includes the step of the young man asking the father for permission. That is a high standard indeed.

There are different dating customs and norms, of course, across Amish communities. Richard Stevick gives us an in-depth look into the variety in his book Growing Up Amish: The Rumspringa Years.

A few excerpts (from pages 216-220) – first, from groups with a more conservative approach to dating:

In small settlements, among conservative youth groups, and in New Order settlements, couples almost always begin dating or courting in the context of Sunday-night singings, when the boy goes to pick up the girl he has asked out, or their meeting may occur afterward, when he takes her home, depending on the local tradition. In all settlements, however, the boy takes the initiative in dating or courtship. He may show his interest by writing a letter, or by going through a mutual friend instead of directly asking the girl for a date. She will typically respond through a third person. Having a mutual friend who prepares the way or relays the response to the invitation reduces the likelihood of public rejection, shame, or teasing.

Formal dating is much less common overall among older teens in these faster crowds. Also, they are slower in joining the church, beginning serious courting, and giving up their youthful pleasures. Many of these youth would regard the kind of courtship described earlier in this chapter as quaint, if not amusing. For many, their goal is to extend the relative freedom of the rumspringa period, so they can expand rather than restrict their worldly experiences. Few of these things lend themselves to the traditional view of courtship, where a young man seeks to find God’s will in choosing who will become his lifetime partner.

Acceptable norms for dating behavior vary widely in different settlements. In all New Order groups and in several Old Order groups (such as in Kalona, Iowa, and Somerset County, Pennsylvania), young people must either be church members or candidates for membership before they can date. In groups like these, dating and courtship are synonymous, so that when a young man and a young woman finally appear together publicly, everyone assumes that they will marry. Playing the field is either discouraged or forbidden. Having to be a church member first can indirectly or directly act as an incentive to join the church. Critics of the New Order churches often point out that their youths tendency to join the church when they are a year or two younger than their Old Order counterparts may have more to do with wanting to date than with some kind of spiritual maturity and discipline.

Both Old Order and New Order members often disparage those settlements in which the youth “date around.” “We believe that courting should be that time for a couple to be sure that it is the Lord’s will for them to marry,” an Old Order father explained. “Finding one’s life mate should be a matter of prayer.” A minister was incredulous when he heard that some young men in a neighboring state had dated as many as five different young women during the previous year.

Finally, a bit more insight on the thought in churches of Gloria and Daniel’s background:

New Order churches, besides objecting to casual dating, disapprove of long courtships, because of the increased temptation toward physical intimacy. A New Order parent explained: “We discourage dating for an overly long time, like one or two years. You do not ask for a date just for a date. You have to have a goal of searching for a lifetime companion.”

goes into much greater detail on this aspect of Amish life. Gloria and Daniel’s experience is certainly not universal across Amish society, but reflects their church group’s emphases on stricter standards and “consequential” dating.