Certain Amish surnames occur with great frequency. Here are ten of the most common:

1. Miller-the most common of all Amish last names.  Joseph Stoll writes: “The German spelling was Müller, and because there were many Millers in Europe, the name was very common, with no common ancestor for many people of this name. There were a number of Anabaptists of this name in different parts of Switzerland.”  Miller is most common in the Midwest; a few Millers may be found in Lancaster County, however.

2. Stoltzfus– The most common Pennsylvania Amish surname.  Nicholas Stoltzfus (1719-1774) is believed to be the common ancestor of all those with this name among Amish and Mennonites today.   Also occasionally seen spelled as Stoltzfoos. 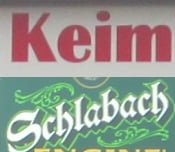 Both common in Holmes County, OH

4. Beiler– More commonly spelled Byler in Midwestern communities such as Holmes County, Ohio. Jacob Beiler (1698-1771), ancestor of most Amish Beilers/Bylers, arrived in America on the Charming Polly (not to be confused with the Charming Nancy) in 1737.  Read Beiler’s will here.

5. Schwartz– A Swiss Amish surname.  Nearly half of the Amish in the Adams County settlement bear this name (as of 2007, 529 of 1163 Adams County Amish families were Schwartz  households).  Also seen in Allen County, but not common outside of Swiss communities.

6. Troyer- Hans Treyer or Dreier was one of the first Anabaptists executed (was drowned with two others in Bern in 1529).  John Troyer of the Kokomo, Indiana community, had possibly the largest family ever among Amish, with 31 children (29 of his own by two wives, plus two step-children), though apparently not all survived to adulthood.

7. Bontrager– other forms of this last name include Bontreger, Borntrager, Borntreger.  Most frequently seen in northern Indiana. A Swiss origin name.

8. King-  Along with Fisher and Beiler the most common Lancaster name following Stoltzfus.  A number of individuals bore the name Koenig or König in Europe.  Joseph Stoll notes: “Between 1732 and 1806, 38 persons bearing the name König arrived in Philadelphia.  It is not known  how many of these were Amish or Mennonite.”

9. Graber- Another name common among Swiss Amish, but also seen in non-Swiss communities.

10. Fisher– most Lancaster Amish can trace their descent back to Christian Fisher who very likely arrived in 1749 aboard the Phoenix, along with numerous other Amish passengers.