“The bottom line is, we believe fully that this will save lives,” Wiggam said. “The speed differential is just too great.”

“The objective is to reduce crashes,” Kick said. “In Holmes County, we are pretty progressive on our lighting and extra highway paving on the side of the roads. It is a lot different in many other areas throughout the state.

“In northern Ashland County and into western Medina and even into Wayne County near West Salem, there are a lot of old order Amish who are just not up to speed on the technology of the better reflective tape for the morning and evening, and light selections similar to what’s on top of a school bus,” he added. “We have a manufacturer in Wayne County that doesn’t sell buggies without that on there already.”

To me it just sounds oddly flippant to reduce the objections of the Amish in those areas (and have no doubt he means the Swartzentruber Amish) to them being “just not up to speed” on their lighting. It suggests not understanding their long and sometimes painful history of staunchly refusing to use the types of visibility aids that 90%+ of other Amish readily use, and why they take that position. 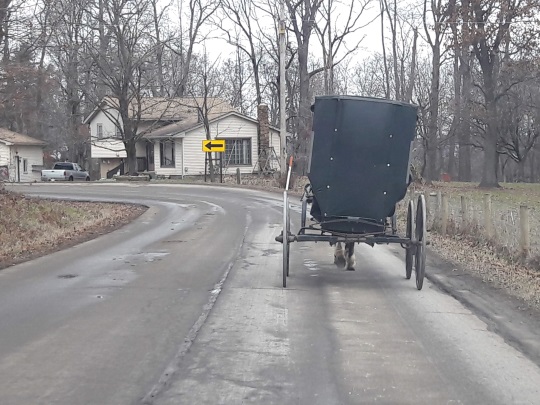 As I explained in a recent post, the Swartzentruber Amish (Ohio has the country’s largest population), do not and have never used flashing lights, and do not even accept the orange SMV triangle.

And I’m kind of baffled this hasn’t been addressed directly in any coverage or statements that I have found from the lawmakers. I wrote both of them over two years ago asking about it, though didn’t hear back. Which is fine; I didn’t really expect to hear back. But I’m surprised it has not been addressed publicly anywhere I’ve seen. In any case, I was done really covering this topic, until this article popped up and made me scratch my head again. There is also this odd bit:

“We’re just trying to reduce the numbers of deaths of people riding in buggies,” Kick said. “The numbers are being updated regularly.”

Wiggam added that flashing lights are helpful and used for special things.

“The speed differential of 35 to 50 miles per hour, something really bad has happened quite often in the state of Ohio, and we want to reduce that,” Wiggam continued. “We think this can be done pretty easily now with the technology available. That’s kind of where we are on this issue. We want to save lives. We all share the roads, and this issue spurred me to move forward with this.”

Don’t get me wrong, I appreciate their wish to save lives. I’m just confused with the “love” explanation. It feels like how you’d explain something to a child. Yes, we love people. But rather than the emotional-trigger reasoning it would it would probably do more good to address the plainest Amish groups’ safety issues more realistically.

It seems like they might be able to make more actual headway with Swartzentruber Amish in the state by promoting a solution that other Swartzentruber Amish have shown themselves to actually adopt, like in communities in North Carolina or Tennessee. Rather than one they’re not going to adopt, ie, the new flashing light, which I’ve also seen described as a “strobe”.

I find this rather weird that it’s not really addressed in any way, but I’m not planning to press it. I’m just going to assume this is going to end up a look-the-other-way situation when it comes to those groups. Or the citations will go out but they’ll go unpaid, and end up ignored by everyone involved. 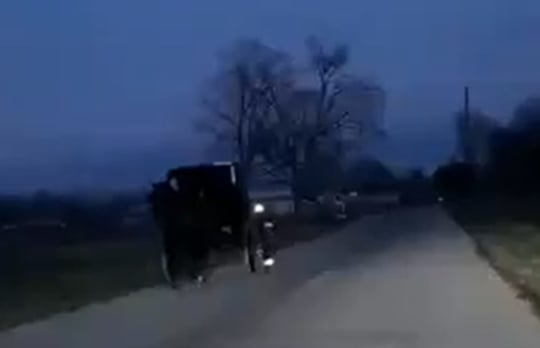 Which is fine I guess, but it might be more constructive and potentially life-saving to help those groups find a solution that is more likely that they would accept, rather than saying they’re just “not up to speed” and implementing a law that they’re not going to adhere to.

For instance: either of what I’m labeling here as the NC or TN solutions (added blocks of bright white reflective materials, and PVC piping attached to the wheels creating a natural non-electric “strobe” effect). A Swartzentruber Amishman in North Carolina whose community adopted one of these told me that he felt it improved visibility, for what that’s worth. And the more important point, they actually put it into action (which they’re not going to do as far as the flashing lights). 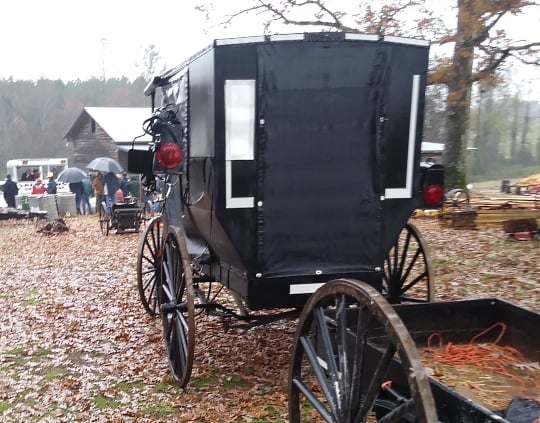 Also for what it’s worth, I can add from my own experience seeing both of these solutions in person – the white area certainly stands out on the black back of the buggy, and the PVC pipes do create an attention-getting oscillating effect on the road.

But, maybe I am totally wrong about this, and the Swartzentruber Amish will all comply and soon affix the flashing lights to their vehicles en masse for the first time ever in their history. There is this bit from the article, a statement by Representative Kick: “But we’re still going to have some bishops that aren’t happy with it. We’ve had bishops tell us they will abide by the law; they just don’t want to see it happen.” I will be highly surprised to see this, as it will be to my knowledge without precedent for this group. But, I guess we’ll see what happens.