Gloria Yoder On Her Van Accident

We learned last week that Amish Cook Gloria Yoder was in a vehicle accident described as “serious”. She re-emerges this week with a column on what happened. Gloria was in a van with other ladies from her church on a thrift shopping trip when this happened:

Moments later, the driver had my full attention as she verbalized an anxious, “Ohhh!!” I took it all in at once; there in front of us, to our left, another 15 passenger van was pulling out right onto the highway where we were cruising 60 miles an hour. No vehicle could slow down in the short distance that spanned the two vans. My mind flashed to God, who can make the worst impossible situation end far better than we ever thought possible. Despite the driver’s best efforts to slow and swerve to the side, there was no way around it. There was a sickening crash as broken portions of both vehicles sailed through the air. I glanced either side of me at my dear little ones. Praise God they were both as securely strapped as ever, perfectly safe. Utter relief swept through me, yet I was alarmed as I witnessed the girl, who had been strapped in the passenger seat, lay motionless on the floorboard by my feet. And oh, right before my eyes was the older gentleman, who drove the other van, limp in his seat. Despite it all, I sensed a deep peace from a Higher hand. 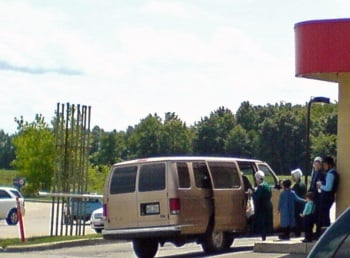 One of Leanna’s friends in the van had a “severely broken hip joint” and won’t be walking for three months. As for Gloria and her children:

The following days, soreness set in, and black and blue spots appeared, revealing more of what happened at the accident, such as my arm that hit Joshua’s car seat. Even though it was very traumatizing at the time, especially for little Hosanna, we are doing well. Hosanna was proud to show the seat belt burn on her neck to others.

Traumatic events like this often bring us to count our blessings, as Gloria does:

Indeed we have so much to thank God for; if there wouldn’t have been a seat belt to hold me back, it is hard telling where I would have landed.

So, tonight I am double blessed to have six beloved children who call me mother; and the love of my life, who calls me his wife.

Read the column in full.

Leave a reply to Gloria Yoder On Her Van Accident