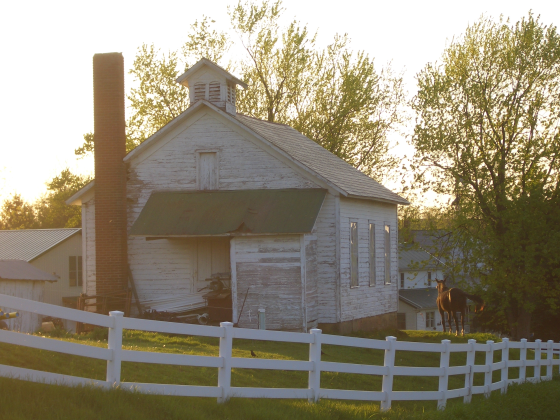 One of my favorite stops of this recent Holmes County trip was Raber’s Bookstore, located “2 miles south of Charm”, as it says on the business card.  This photo is not of the store itself, but of an old schoolhouse nearby.

The bookstore has changed hands to the next generation and is run by a lively pair, we’ll call them “Atlee” and “Emma”.  The store itself is housed in what looks to be an old milk house.  It is quite cramped but cozy, with a low ceiling.  They are constructing a new building for it next door, which will be sure to make browsing the shop a little easier.

When I dropped in, Emma was around, and we had a nice talk.  She had heard about my book and seemed interested in it.  I told her it was great to finally visit the store, which I’d pictured in my mind on numerous occasions when sending in orders by mail (among other publications, Raber’s sells the Almanac, or Calender).

Another customer dropped in, and later Atlee himself, who seemed equally warm and welcoming though he appeared to be busy with something, as he left shortly thereafter.  I was signing the guest book as Atlee returned, asking Emma where his shotgun was.  “I’m about to leave, there’s no need for that,” I interjected.

They seemed to get a kick out of that.  And after a hearty laugh, I escaped unscathed.