I’ve finally put together some trip highlights from Lancaster County. Today begins a new trip, a week-long journey across Indiana and Ohio.  Before we get into that, here’s what I liked from last week’s visit:

Seven nights, four bonfires, two mountain pie feasts. Amish people like to burn stuff in the summer time. Mostly wood from what I can tell. It makes for a nice setting to sit, talk, and eat, and roast mountain pies. This past week was bonfire-o-rama. Two of the fires were lit in celebration of birthdays (mine and Eli’s, and another friend’s surprise party).

My second try at mountain pies came out tastier than the first. Part of the problem the first time is that I got to choose from the last two pie irons–both round. Nothing wrong with that, except that the bread we had was all square. If you’re hungry enough it tastes good whatever final shape it takes.

Big Valley baby. A quick story. My Polish girlfriend, Izabela, is visiting the USA for the first time and was along on this trip. While in Big Valley we paid a visit to a Nebraska Amish family I’m acquainted with. I had met them once 4 years earlier and just decided to drop in on a whim. 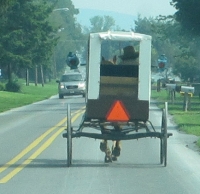 The man of the house vaguely remembered me, and ended up inviting us in to chat with his wife. After a few minutes of talking, the 9-year-old daughter is handing her 9-day-old sister to a dumbfounded Izabela–a perfect stranger 10 minutes before. Iza couldn’t imagine something similar happening in her culture. The baby quickly won her heart and I think wanted to leave with us (or so she thought). I think that says something about attitudes to children in Amish culture, where you’re comfortable sharing them–even with random Polish-English people that just show up at your door.

Connecting friends. Introducing two Amish families as a third (English) party is kind of weird. You feel like you are in the wrong spot, that you are the one that should be getting introduced to someone and not making the connections. When Amish people meet there is the usual search for a link of some sort–who is your dad, where do you come from, what do you do and who you work(ed) with. I was glad that it could finally happen, as I usually only talk about the Zooks and the Kings (who live on one side of Lancaster) to the Riehls (who live on the other), and vice versa.

In little Amish communities of a few church districts you generally know everyone. In the big Lancaster community (going on 200 churches), you might not have many relatives, dealings or running-around friends in a given area, which was the case here. For an Amish person strangers can include both English and other Amish. The nice thing is that there is usually an Amish connection somewhere if you poke around enough. 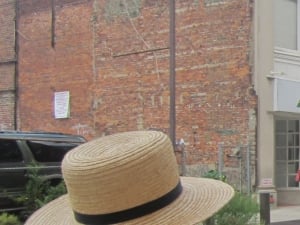 Amish hat in the City

Day trip to Philly. We had Amish friends along. Even in a place like Philadelphia with an Amish presence nearby, people notice Amish walking around one of America’s largest cities. I noticed some heads turn and some sheepish smiles of people we passed or interacted with.

I also think that it helps to be Amish in certain situations. One example. We visited the US Mint. You need identification to get in. Three of us had IDs, while the fourth did not–not one of our Amish companions, but Izabela. My friend’s wife explained the situation and asked if we could slide, which the understanding guard let happen. Once inside my friend joked that it was “the hat” that got us in. I think that was just a half-joke as there must be a kernel of truth there.

Visiting Centralia. This has nothing to do with the Amish. Centralia is a central PA mining town–or I should say was, because it’s been essentially abandoned for many years. Centralia lies in anthracite coal mining country. A half-century ago, a mine fire was sparked and began slowly burning, snaking its way along the massive coal veins running beneath the town. Noxious gases and ground collapses threatened the townspeople’s health and safety.  Multi-million dollar efforts to extinguish the fire failed.  Many residents moved away and nearly all buildings in the town were demolished beginning in the 1980s. Today only a handful, perhaps 3 or 4, homes remain in this town which once had a population over 1000 souls. 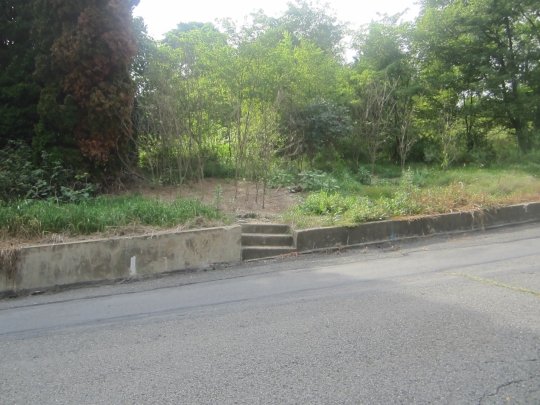 A former homesite in Centralia, PA

Centralia is a tragic and rather eerie place. I remember stumbling across it five years ago while traveling across the state. I came to a stop at what looked like a normal country highway intersection, except for the odd, out-of-place bench placed near the crossroads. Like something you’d see in a town, and not in the middle of nowhere.  Looking closer I began to notice sidewalks and the layout of a street plan.  As I creeped along the cracked, overgrown asphalt streets, old retaining walls and steps hinted at a forgotten past.  I slowly realized that a town once lay here.  Governmental response to the town’s crisis has evoked controversy particularly among those who once lived there, and the town appears in the news from time to time.  It’s a modern-day ghost town in a place you’d hardly expect to find one.

Jokes.  Hang around with Amish folks long enough, and the jokes start flowing.  This time I got to hear the one about the origins of the fictional “Stoltzfus Chinese Market” in Philly, among others.  Amish like to make Polish jokes, which they hit me with from time to time knowing my origins.  And with a true blooded Polish person along this time, of course some wondered what Izabela thought of them.  She was good-natured about it.  It helps that she can give as good as she gets.

Amish also joke about themselves.  We even got a second hearing of a friend’s favorite Amish joke, about the bridge in the desert.  “I’ll tell you a really good Amish joke,” he began with a smile.  “But it starts with a Polish joke,” he conceded to an uproar of laughter.   Well of course it does!