Over the weekend a number of readers sent me a Lancaster Online article which happens to be the best behind-the-scenes look at the ‘Amish Mafia‘ program, and reaction to it, that I’ve read.  Some highlights below.

On main character Lebanon Levi, from an Amish-raised man who knows him:

“He’d rather sit back in a corner than go after somebody,” the man said, claiming he’s hung out with Levi several times at “hut parties” — one portrayal on the show that, in his opinion, is accurate.

Other local Amish men said they know Levi to be “nice” and “average,” saying his character on the show is just that, a persona.

On the response of some Amish to the show:

The elder, like many other Amish men interviewed, said they appreciate the show’s depiction of the rural scenery, including sprawling farms and horse-drawn buggies on area roads.

But, like the officers, they don’t buy the story lines.

On the program’s authenticity:

In reality, Echternach said, “What I see is between 1 and 10 percent truth.”

Local Amish residents identified what they saw as genuine truths on the show, including cover-charge hut parties.

Residents said the parties happen when someone rents a home or apartment for a weekend and host friends — many Amish, some English — for gatherings. The building will have cable television, telephone and Internet services.

“If we want to watch football, we actually rent a place,” the 28-year-old said, adding that he’s seen Levi at such parties.

The characters — at least Levi, Alvin, John and Esther — are real people. But their stories are embellished or created, according to people who know them.

Back to the fold?

I think at this point the premise of this program has been pretty well discredited (though as noted, individual events depicted may be based in fact).  The article gives us a little more insight into the people on the show, none of which is that surprising. 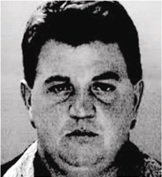 Accompanying the piece are mug shots of four of the show’s characters, along with listings of their criminal offenses, which include multiple DUIs, disorderly conduct, and hit-and-run.

The grab bag of transgressions the four have racked up are not typical of Amish church members.  And as one might guess, none of them belong to an Amish church (though the Amish-behaving-badly angle, real or not, is probably responsible for much of the show’s appeal, writes David Weaver-Zercher in a recent opinion piece).

This leads to my favorite part of the article.  If you’re an “Amish mafioso”, the church has something for you:

However, the arrests or their association with the show won’t keep any of the characters from being able to join the Amish church.

“The door’s always open,” the elder said. “They’ll be accepted if they come into our beliefs.”

Some might find this surprising, but it fits the picture of an Amish community which forgives.  It’s not likely that the people on this show will ever become members of an Amish church, but at least it’s possible.  I’m not sure what you have to do to become an irredeemable black sheep among the Amish, but “reality” TV apparently isn’t it.