That fact is not lost on the numerous merchants of Amish-branded stuff.  Software, refrigerators, and organic cotton bedsheets are among the products that non-Amish dealers have sold under the Amish moniker or by association with Amish images.

Often, the connection to bona fide ‘Amishness’ (whatever that term means) is dubious at best.  David Luthy wrote an article in the mid-90s in Family Life on the phenomenon of Amish-name branding.

Luthy offers the example of a turkey-processing plant which used the Amish name, writing, ‘to qualify for such a label all that was needed was that someone Amish carried buckets of commercial feed to them or an Amish person worked in the processing plant!’

Amishness often seems to be a near-mystical quality that the Amish alone may dispense, apparently by merely running fingers over a product or with an approving nod in its direction. 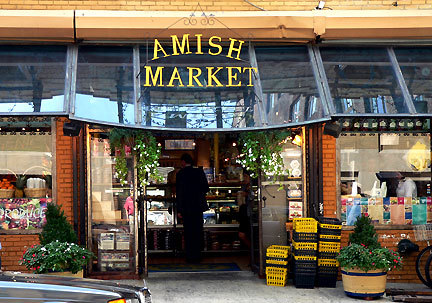 A female Amish acquaintance in Ohio who runs a food-related business herself offered another example, complaining, good-naturedly, about the use of the Amish name on products.

‘Amish-made whatever!…We feel it’s not right to use ‘Amish’ just so we can sell something.  Not everybody feels that way, and that’s okay.’

‘Amish water, hey!’ She continued.  ‘We didn’t make the water, God did!  Or they’ll go to a restaurant and say ‘is this Amish chicken?’  Well that chicken has never been Amish!’

‘Still not baptized!’ I pointed out.

Yet many Amish owners don’t exactly mind if word gets out about their background.  They know what sells.

What is the general Amish view on the topic?  It’s an interesting issue, as opinion is divided.  You won’t find many Amish-owned firms with ‘Amish’ in the name.  A general rule of thumb is that ‘if it says Amish, then it ain’t’.  Or it’s at least not being sold directly by an Amish person.

Or if it’s a business, owned by one.  When asked, an Amish acquaintance in Ohio knew of just one firm with ‘Amish’ in the name that was Amish-owned (and which had subsequently been sold to a non-Amish person).

Yet some Amish promote their status in subtle and not-so-subtle ways.  Some release promotional literature and catalogs with images or text implying or stating the owner’s Amishness.

Others may use pictures of Amish children for marketing purposes, as photos of unbaptized children are often seen as more acceptable.