If you missed it, on Saturday, a Graves County teenage buggy driver was cited for failure to display the SMV triangle after his buggy was hit and dragged into a ditch. 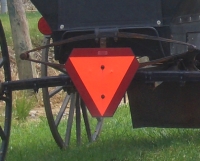 Five children were in the carriage, ages 7 to 15 (Amish children operate horse-drawn vehicles from a young age).   Luckily they were unhurt.

It should also be noted that the driver of the vehicle was cited for DUI and leaving the scene of the crime.

Graves County is where Amish were recently sentenced to jail for failure to display the triangle.

Whether this issue is ultimately resolved to the satisfaction of the Amish community or to that of the state one thing is certain; the SMV signs WILL DO LITTLE TO ACTUALLY SOLVE THE PROBLEM.  Will the buggies be easier to see; especially at night? Probably. Will the motoring public slow down one iota even after seeing the SMV symbol on the buggy? Honestly? It is very doubtful.

I will NEVER drive any of my horse drawn vehicles on a public roadway after dark; even if I had flashing red and white LED lights over every square inch of the rear end of the vehicle, because people that are not going to slow down will not slow down regardless what they see.  It will only impact the small minority of drivers that are already courteous and careful…(continued)