The past several weeks have seen quite a few buggy accidents in the news. The most headline-grabbing was the story of the Missouri woman who hit a buggy for the second time in a year.

The first incident last September resulted in the death of a pregnant Amish woman.

In the latest, the 83-year-old resident of Licking, MO, hit a buggy containing four youth, saying she “didn’t see it in time to get stopped.”

This crash occurred on the same road as the first. Thankfully, this one seems to have caused no serious injuries.

The story was different in Lagrange County, Indiana a week ago. A 21-year-old man was arrested for causing an accident which killed an Amish woman and her 15-year-old daughter. Alcohol was involved.

Two of the most recent reported incidents both took place in New York over the past week. Last Wednesday an accident near the Canadian border in Lisbon, NY left a 7-year-old Amish boy in critical condition (upgraded to serious), and killed the horse.

Yesterday, an 11-year-old Amish girl was injured in a hit-and-run in Rose, NY. Thankfully her injuries were minor, but police are still looking for the driver of the black Jeep Liberty involved in the wreck.

Buggy accidents have not only led to Amish injuries and deaths. Not quite a month ago in Centre County, PA, a motorcyclist crashed into the back of a buggy. The driver was killed though no one in the buggy was hurt.


Finally, it’s worth mentioning an incident that was not an accident but rather an attack. An Amish teenager needed medical attention after being struck by eggs thrown from a passing car. This occurred on Route 340 in Lancaster County.

This is not a new phenomenon. Amish have been subject to harassment and attacks in many previous incidents.

Some of this could be prevented

Not exactly happy Monday morning news to report. Some, if not all, of these cases involve negligence on the part of non-Amish drivers.

Lighting and visibility is one part of the equation here, and the Amish can do their part to make sure they are seen and drivers well-equipped to operate a horse-drawn vehicle.

But some of these accidents can be prevented by more responsible behavior on the part of non-Amish drivers.

If you’re visiting Amish country this summer, keep your head up, speed down, and have patience when passing, especially in curvy, hilly, or low visibility areas.

If you live in Amish country, I can understand that dealing with slowdowns due to buggy traffic can be an annoyance, but keep in mind that a lot of these accidents are caused by locals. 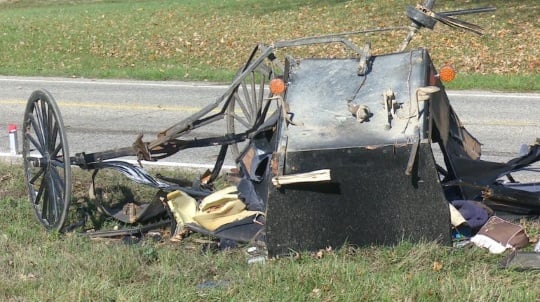