How do Amish youth get driver’s licenses?

I’ve seen the comments about teens, during Rumspringa, driving cars. How do they get a permit, practice time, license and money to buy a car without the parent’s assistance?

We’ve discussed Amish youth getting their first buggies, but what about cars?  First off, some Amish youth do in fact drive, and some Amish parents have no choice but to concede car driving to those children (even though they may not be happy about it).

Like in English society during adolescence Amish parental control loosens.  But there is still a degree of influence or control that comes from living under the same roof and still not being an adult.  Amish parents aren’t encouraging their children to get behind the wheel, but they don’t necessarily have the authority to try to stop them even if they thought doing so would be a good idea.

If you ever drive around Amish communities and see cars parked in farm lanes or behind barns, chance are one of the adolescent family members–the majority of the time male–owns them.  I remember seeing this often my first summer on the backroads of Holmes County, Ohio and it took me a little while to figure out what was going on.

Even though a lot of Amish turn a disapproving eye to youth driving, truth be told some Amish parents benefit from their children being drivers, whether it is in providing transport for a business or for personal needs.  However not all Amish are going to explicitly or tacitly permit this, lower Amish in particular.

For instance in the same Ohio community Andy Weaver Amish who permit their children to own cars while living at home are subject to church sanctions (see An Amish Paradox p. 47–“Today, all Andy Weaver young people know that the high price they must pay if they buy a car includes leaving home”).  So, driving would be classified by some as “wilder” behavior, but certainly not the wildest, and not all that uncommon in certain communities.

As far as learning to drive, obviously Amish kids are not out practicing with dad in the Wal-Mart parking lot.  Some Amish youth are going to have experience moving a tractor around the farm (even though most Amish don’t use them in the fields). 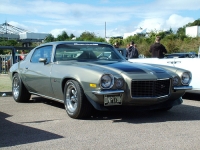 Certainly many get practice behind the wheels of friends’ vehicles.  I think like any other teens Amish youth have a fascination with fast cars, and given the circumstances of growing up in a slower-paced horse-and-buggy world, perhaps even more so.  Unfortunately, as with the English, Amish teens and cars can end badly, and from time to time you hear of tragic accidents with Amish youth drivers at fault.

Getting money to buy a car

When it comes to money, even though Amish kids typically contribute to the household finances until age 21, they can surely figure out ways of getting together enough funds to purchase a jalopy.  For those who’ve read his account of growing up Amish, Ira Wagler describs pooling money together with buddies to buy a first car.  Most Amish youth work and some even run their own sideline businesses; it’s not unheard of for Amish to cut their teeth in entrepreneurship while still in their teens.

When generating your own business income it’s not hard to see how you could procure the funds for a vehicle.  Even if you’re just doing regular labor finding a way to buy a thousand-dollar beater is hardly an insurmountable challenge for a determined young man, even when you’re still officially contributing to the household.

And in the less-common cases when an Amish youth leaves home to live on his own he would not have the same obligations to the household purse.  Of course at age 21 finances become a lot clearer, and with some Amish delaying baptism for years, the automotive world becomes their oyster.

On getting a driver’s license, I once asked an Amishman about the situation in his home state of Ohio: “You can get [a license] at 16…at 18, you can then get it yourself, without having the parents involved,” he explained.  “About all the Amish just do it that way.  They wait til they’re 18…they’ll get out there soon enough anyway, so why push them.”

Driver’s licensing laws vary from state to state, but you’re probably not seeing a lot of permits with Amish youth for the obvious reasons.  For what it’s worth, this Amish acquaintance–and former youth driver himself–doesn’t seem to miss his wheels much now that he’s a baptized Amish adult.  Returning from a trip to the city of Akron, he explains, “We got into rush hour on the way home.  And to think that people actually go through that every day…I couldn’t make it!” 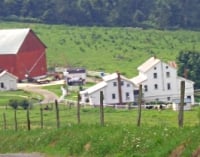 Though a lot of parents are not comfortable with it, the reality is that a good chunk of Amish youth–boys especially–are going to want to try out driving a car during those heady years of sowing oats.  How parents handle their teens’ desires can make a difference in not just the child-parent relationship but also the individual’s experience in the Amish church, even influencing how and if they join church in later years.

I hope that does some justice to Rita’s question, and of course experiences vary across Amish society.  I’d be curious to hear any “Amish car anecdotes” you’ve heard or experienced so feel free to share in the comments.