It seems the most contentious issue with Amish moving into Lancaster County towns and subdivisions has to do with housing horses.

Amish have been seeking allowances to keep horses on smaller-than-normally-permitted properties.

Who among the Amish wants to live in a suburban or “in-town” home? These may be young families, or older retired couples, who have downsized from the farm, but still need to keep buggy horses.

Amishman Levi Stoltzfus tried in April to get the East Hempfield Township ordinance changed. He asked for an allowance of an additional horse per acre. Stoltzfus’ request was rejected, despite him arguing that “an only horse is a lonely horse.”

Now the township is considering a revision to allow two horses on a half acre property. Currently, just one horse is permitted per acre.

They would also permit them in residential/village zones, not just in the township’s “agricultural zone.” The change would entail “strict manure, odor and noise control measures.”

East Hempfield Township lies just west-northwest of Lancaster city. This is not traditionally a heavily Amish-settled area, as the bulk of the Amish live in the eastern side of the county. But recent years have seen Amish moving west in the county. 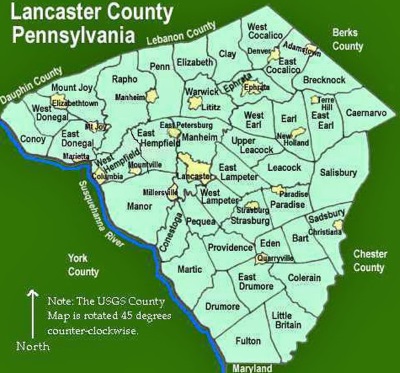 The ordinance does not explicitly mention the Amish. But it is understood that it would apply primarily to them (and I suppose, any of the county’s Old Order Mennonites who might consider moving into the area).

But a local resident has objected, alleging religious favoritism in a legal memorandum (via Lancaster Online):

Relaxing the ordinance would benefit “Amish persons at the expense of others” and “advance the practice of the Amish religion,” an attorney for resident Richard Szarko said in a memorandum to the township.

In objecting to the proposed revisions, Szarko, of Shenck Road, cites road apples and increased congestion if neighborhoods are subject to regular horse traffic. His attorney’s memorandum further contends horses will be deprived of a field for grazing and “a quiet existence.”

Szarko’s attorney Virginia Morrison also argues that the proposed change “encourages Amish to populate the area in higher numbers” and “advances the practice of the Amish religion in the township, regardless of whether it is to the detriment of other non-religious residents.”

Arguing for the other side, an official sees horses as basically analagous to motor vehicles:

“This is about transportation, plain and simple” supervisor Tom Bennett said. “We don’t regulate the number of vehicles that someone owns, and in my view I don’t think we should be regulating the number of horses that an Amish person can utilize for transportation purposes.”

Many people want to be close to the Amish; some people move to Amish areas specifically for this reason. But not everyone is so fond of having them, or their horses and their leave-behinds, around.

To be frank, a cookie-cutter subdivision of half-acre lots filled with Amish residents is an amusing picture to imagine. But maybe that picture is closer to reality, at least in Lancaster County, than we might think. A vote on the ordinance could come as soon as August 21.

What do you think? Is two horses on a half-acre lot a reasonable rule? Would you like to have Amish horses in your neighborhood?