Pledging allegiance to the flag – or God?

“The flag is fine, but we’re the only nation that worships the flag. It’s very heathen. The kingdom we live in, we pledge our allegiance to God, not the flag.”

That’s a quote from an Amishman in the PBS film “The Amish”.

This struck me as I’ve never really thought about it in those terms. I know that people do object to the pledge on religious grounds, as the Pledge could be considered an oath.  But I’ve never thought of it as “worshiping” the flag, or the nation it represents.

Like countless other grade schoolers I grew up saying the Pledge every morning.  I’m assuming the Pledge is still said in public and many private schools.  One place it’s not said, though, is in Amish schools.  Amish schools do not display American flags (though wall charts of US Presidents are not uncommon).

The Pledge of Allegiance was crafted by Francis Bellamy in 1892.  Bellamy was a Baptist minister who co-founded the Society of Christian Socialists.  The Pledge was at least partially motivated by business.  Bellamy worked for the Youth’s Companion magazine, which sold flags while promoting the schoolhouse flag movement, which sought to place the Stars-and-Stripes in every American school. 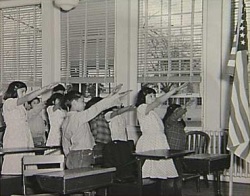 In its 120+ years of existence the Pledge has evoked controversy for different reasons.  In 2002 it was even ruled unconstitutional, a decision later overturned by the Supreme Court.

The Pledge itself has morphed in form over time.  For example the original “Bellamy flag salute” was discontinued for its similarities to the Nazi salute (which actually came about later).  The wording has changed as well.  The original version read:

“I pledge allegiance to my flag and the republic for which it stands: one nation indivisible with liberty and justice for all.”

The fragment “under God” was added in 1954.  The current version:

“I pledge allegiance to the flag of the United States of America, and to the republic for which it stands, one nation under God, indivisible, with liberty and justice for all.”

Is saying the Pledge just patriotic loyalty?  Do the words “under God” get pledging Christians off the hook?

Or is the Pledge simply “heathen”, as the Amishman says?