How do Amish keep track of their grandchildren?

I am always amazed by numbers like these, which are not uncommon for Amish individuals, especially when they get up into their 8th decades and beyond.  The math is pretty simple.  Say the average Amish couple has 7 children with the last coming around age 40.

If those children average the same amount of children, by the time the youngest is 40, you’ve got around 50 grands, plus a crop of great-grands coming on strong. In some communities families average more, however–even 8 or 9 children.  No wonder it’s possible to have an Amish family as large as this.

A better title for this post might be; how well do Amish grandparents get to know their grandkids?  How many of Mr. Stoltzfus’s grandchildren really “knew” their grandfather?  How could they possibly?  And if you’re Mr. Stoltzfus, how do you even keep the names straight?  My guess is that you don’t, or you consult your church directory often.

The lovable modern stereotype is of the doting, spoiling grandparent.  Certainly Amish grandmas and grandpas indulge in this behavior too, but at some point you simply can’t pull it off.  The numbers don’t let you even if you wanted to.

Boiling it down further, how do large family relationships differ at the nuclear family level? Coming from a 2-child household, I have sometimes wondered about the nature of relationships in these larger families.  At times I was envious of friends with more siblings.  I also wondered about the dynamic in what were really “big” families to me, like my father’s, who grew up in a time when most of society seemed more Amish, so to speak, as one of 7 siblings himself.  Did dad get as much quality time with his mom as I did with mine? 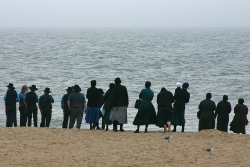 Clearly not all Amish families are as big as in Mr. Stoltzfus’s case.  Also, you might think more children = less time spent with each = a “poorer” individual relationship.  But even if there were a difference in the quantity, that doesn’t necessarily mean that quality of time spent is comparable in Amish families.

For example, as a recent guest at a (non-Amish, not my own) family get-together, I noticed that most of the children above infant age spent most of the time occupied with screens of some sort–either the big one in the corner pumping out holiday movies, or one of the handheld versions providing games and other entertainments.  Occasionally they surfaced to interact, in response to an adult’s question or to get another slice of cake.

In the Amish web

Amish children certainly have their own distractions, but it’s probably safe to say they don’t intrude as stealthily or aggressively.

However I’m not so sure that even with families of 8 or 10 children and dozens of grandchildren, Amish don’t actually spend more time together in terms of quantity as well.  As the authors of The Amish Way note, Amish children are raised in a “thick family web…Because Amish grandparents do not live in retirement communities, most of them see some of their grandchildren or great-grandchildren on a daily basis” (p. 121).

Not to mention the myriad other opportunities for interaction at work projects, school events, reunions, and so on.  If you spend a few days in a traditional Amish home, you know that people (usually family of some sort) are always about.

I suppose the nature of relationships in large Amish families vs. those in smaller non-Amish ones is up for debate.  One thing is for certain, though.  Those 250+ grands and great-grands of Mr. Stoltzfus weren’t getting a 20-dollar bill every birthday and Christmas like I used to.  Talk about a quick road to bankruptcy for grandpa!