This is not really an Amish story, but “Amish” ended up in the headlines incidentally.

A group of Amish boys in Hillsdale County, Michigan stumbled across a body in the woods last week.

Authorities have determined the 37-year-old-man died of multiple gunshot wounds. From the Hillsdale Collegian:

Joseph Graber, a 12-year-old boy who lives less than a mile away from the crime scene, was one of the four Amish children who discovered the body on Sunday as they were riding through the countryside. Graber said when he saw the body, he didn’t think it was real.

“We thought it was a clown or a fake or something,” Graber said. “Once we saw it we got really scared and rode home and told the neighbors to make a call.”

Graber and some of his family members riding with him went back to get help. His friend, 15-year-old Lavern Eicher, separated from the group and rode back to his home to tell his family.

“As we were starting through the woods, I saw a pair of pants and some shoes. I thought it was a rag or something, and I joked ‘I guess that’s all that must have been left of him,’” Eicher said in an interview with The Collegian. “But when I got closer, maybe 10 feet away, I was surprised to see it was a man.”


Hillsdale County and neighboring Branch County are home to around eight distinct Amish communities between them. 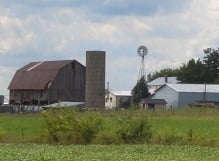 I’ve been in the area a couple of times, and it’s not like it’s gritty urban territory where you wouldn’t be surprised by these kinds of stories. It’s small towns and rural Amish country.

Yet Sherriff Tim Parker says that “We’ve had several homicides through the years…There have been some that have been a lot more heinous.” You have to wonder if drugs were involved.

The mystery of what happened to this man will hopefully be solved, and the kids who had the misfortune of discovering the body not be badly impacted by it.