Following our first post on natural remedies which Amish use, here are five more. This time, they’re all sourced from Emma Byler’s book Plain & Happy Living: Amish Recipes & Remedies. I’m not promoting these as something you should use, though. I’m just sharing them as ones that caught my eye “for informational purposes”. 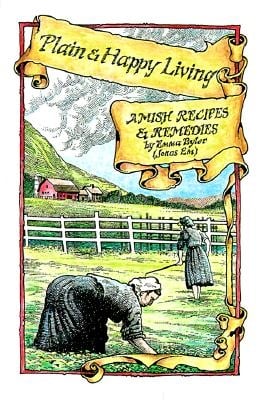 Amish use a variety of approaches to health care, including conventional care, traditional remedies, and more unorthodox methods. And those approaches can vary by what’s felt to be tried-and-true and effective in a given community or family.

Are natural remedies safe? I suppose that depends on the remedy in question. Many are, but some might not be.

Emma herself provides disclaimers in the book, including this rather strong one at the beginning of Chapter 11 – “Remedies For Specific Ills”:

The following remedies have been used in our family since I was young. Some of the plants used in them have since been banned by the Food and Drug Administration, including comfrey, sassafras, and tansy, as well as pennyroyal for women in childbearing years because it supposedly causes miscarriage. These home remedies are given for information only so that the reader will know what we used (and still use) to help heal our own ills. They are not given as prescriptions in any way. If you are ill, see your physician. If you use any of these remedies, you do so at your own risk.

So coming from the author of the book, I hope that’s clear. Use at your own risk. That said, here are some interesting ones that caught my eye.

An Epidemic of 100 Years Ago, & Native American Influence

But before we look at the remedies, I first want to just share an excerpt from the Introduction, which give’s Emma’s purpose for writing the book – and also gives us some historical context which should resonate with the current situation today:

This book is written as a folk lore so that this new generation can get a glimpse of our lives as they were in the days of yore — let’s say since 1900, the year my mother was born.

Mother can remember when the first cars came clattering down what is now State Route 87 in Middlefield, Ohio which was then still a dirt road.

Doctors of that time, who made their visits in horse and buggy, did not have medicines like we have today to combat diseases. When Father and Mother set their wedding date early in December, 1918, the flu broke out. Their wedding date came and passed because no one was able to come to the wedding as the neighbors were all sick. Many families lost one or two members and when there was a death, the dead would be buried and the funeral ceremony preached later when people were again able to go to church, weddings and other events. I believe it was against the law to hold a gathering of any kind during this epidemic. I remember mother saying that quinine and bitters were given, and the doctor ordered everyone scattered throughout the house with as much fresh air as possible in each room. It seemed that those going outside to do chores regularly, if they came down with the flu at all, were the last to get it. (p. 13) 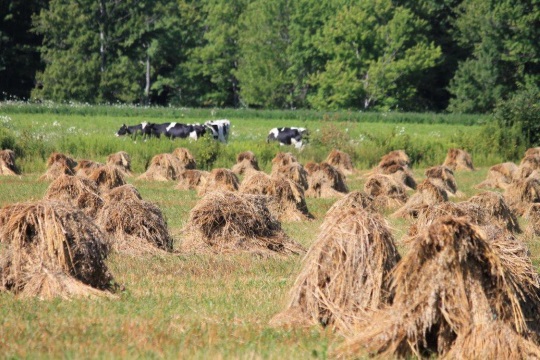 Emma also shares some interesting anecdotes about a particular Native American source for some of these remedies (see more below, in the remedies I’ve included):

During the Depression, there was no money for doctors or medicine. When I was about ten years old (1932), an old Indian came from the West and moved into a tumbled-down shack up the road from our place. His cooking utensils were old and battered ones he had found on a junk pile. He came often to our place for milk and water and would show Dad the herbs, roots, and other materials he had gathered that day. He carried a large bag over his shoulder with a wide strap, and put everything he found in that bag. Once, he gave me a gold lock and a key. I was so proud of it that I carried it in a metal aspirin tin along with a nickel and several teeth I had lost a while before. I had a string pinched in the box as a handle and would swing this around One time it slipped out of my hand and was lost forever. I now feel it probably flew up in the tree I was standing under and stayed there, which made my raking and cleaning of the grass and ground under the tree quite futile.

The Indian would gather his roots in the fall of the year after the seed buds were ripe and would carefully seed a new bed as he gathered, thus leaving a new crop for the future. In later years, my father found many of these beds and would then do the same. My nephew, Danny D. Miller, (another Geauga County Amish herbalist) is now finding some of these beds and harvesting the roots. This was primarily golden seal and ginseng, both of which are rather hard to find now. (p. 13-14)

Taken from Plain and Happy Living: Amish Recipes and Remedies

1. Feverfew – One that I’d never heard of, this is a flowering plant in the daisy family.

As its name suggests, Emma recommends its use in a tea sweetened with honey to treat coughs, colds and flu. She also suggests using it as an insect repellent, made into a strong tea and then sprayed on plants. 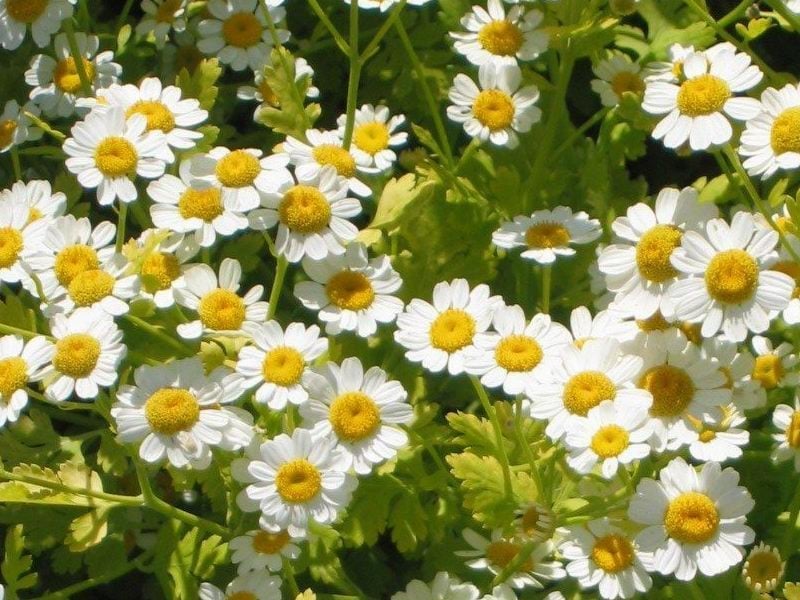 The NIH site says it is also used for treating migraine headaches, rheumatoid arthritis, allergies, and other maladies. However, they also note that “Only a few studies have looked into feverfew’s use for migraine headache. There’s little or no evidence about feverfew for any other health conditions.”

2. Wild Cherry Bark – This is mentioned in just one place in Emma’s book, but in an interesting context. Emma writes:

Dad had a long spouted coffee pot which held about a quart. This was his brew pot. Sometimes just plain boneset tea was brewed in it. But often times, blue vervain was added for nerves, and/or chamomile blossoms for the same reason. Wild cherry bark was added for a tonic. This was known as the “bitters,” and Dad never had to tell us twice to leave it alone! (p. 97)

That should give you some idea of the taste.

What is the supposed benefit of wild cherry bark? According to WebMD, “Wild cherry contains chemicals that might help reduce swelling (inflammation).” They add that “It is also used in cough syrups because of its sedative (sleepiness), expectorant (clearing mucus), drying, and cough-suppressing effects.”

3. Pigs Ear Leaves (“si ohra blatter”) – This plant, native to South Africa but common in gardens in other countries, shows up in Emma’s section on remedies for “Sprains, Bad Bruises and Swellings”:

A good soak of the feet once a day for about 20 minutes or 1/2 hour in a mash made of plantain (we Amish call this “si ohra blatter” or “pigs ear leaves”) and/or comfrey leaves will also help this condition. It can’t hurt you to try. One time, when my nephew broke his foot falling off a ladder while siding a house, his foot became so swollen the doctor couldn’t put a cast on. Nephew didn’t want to stay in the hospital till the swelling went down, so he came home. His mother gathered plantain, cut it up and put it in water as hot as he could stand it. This drew all the soreness and swelling out so that the cast could be put right on. (pp. 125-26)

Plantain I always thought was a banana-like plant – and it is. But there is another, unrelated plant called plantago which is also referred to as plantains (or, fleaworts).

Of course I would just use “pigs ear leaves” to refer to this plant – what a great name. You can see by this photo what they look like (updated from previous photo which was a different type of “pigs ears” plant – this is the Broadleaf Plantain). Remind you of pigs’ ears? 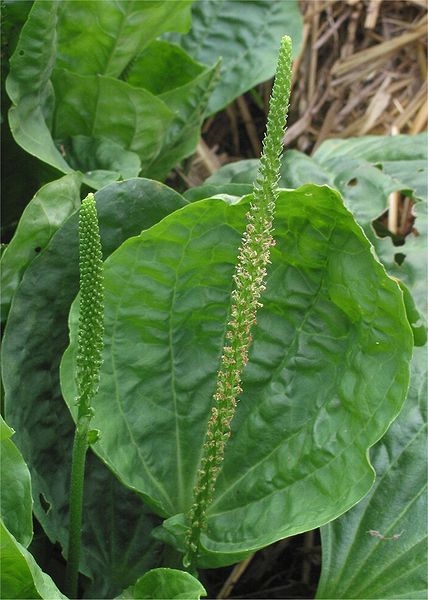 4. Old Indian Salve – Emma has a whole section on salves and poultices. This one she says comes from her grandmother. Here’s the recipe and Emma’s comments. We see plantain leaves appear again here:

Everything is placed in a pot with enough water to cover. Simmer 1/2 to 3/4 hour or longer. Strain and squeeze out juice. Boil juice down to 1/2 the amount. Add 1 lb. unsalted butter, 1 oz. beeswax, 1 oz. rosin, and simmer over a slow fire until the water is all gone. Use on swellings and sores.

Emma says of this recipe from the Byler family catalog: “I don’t remember ever using it, but it looks interesting!” 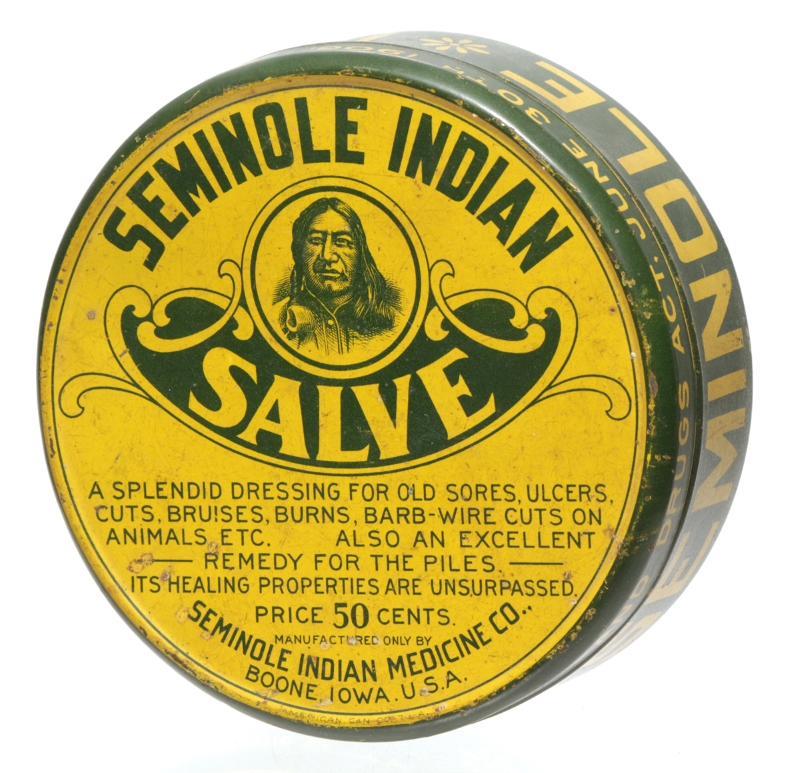 I found the photo above of an early-1900s product marketed as “Seminole Indian Salve”. There are a number of vintage health products like this with Native American names and imagery, suggesting the appeal of this people at one time as a source for remedies.

I find the use of tobacco in Emma’s grandmother’s salve interesting. It’s a plant that used in one context causes health problems, but in another might help alleviate different health problems.

Golden seal is a perennial herb whose roots and leaves are used in traditional remedies. The herb appears on eight pages of Emma’s book. One of those is for a Golden Seal Tonic, which Emma feels strongly about:

Golden Seal – Put 1/2 teaspoon powdered golden seal root in 1 pint of boiling water and stew it a bit. I buy powder from Katie P. Hershberger, who advertises in the Budget (See Appendix). This is one of the most valuable home remedies. We use it as a hot tea when the first sign of sore mouth and throat appears. Dad would also chew the root as a remedy for his peptic stomach. 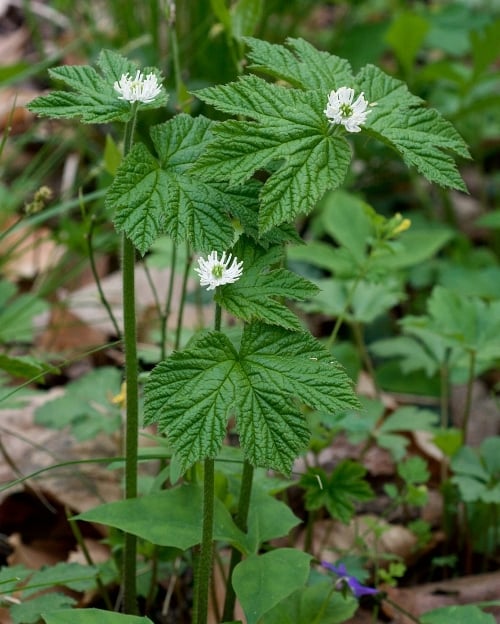 If you missed the first five remedies post, you’ll find that here.