In January we learned the unusual story of Amish convert Matthew Secich and his premium meats and cheeses business, Charcuterie. 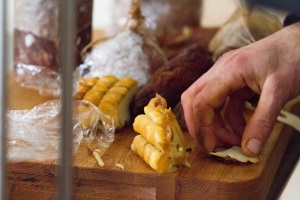 A former chef working in some of the country’s top restaurants, Secich had found his way to becoming a member of the Amish community at Unity, Maine.

This story which achieved a national reach got him a lot of attention. Now he has issues with health regulations which may cause his business to close, as reported by Maine’s NPR outlet:

John Bott is a spokesman for the Maine Department of Agriculture, Conservation, and Forestry. He says one point of concern is the ice house Secich uses instead of a refrigerator. Amish shun electricity.

“You have to keep meats at a required 41-degree-Fahrenheit temperature, which is relatively easy to obtain using modern technology, but with an ice house, it could present some challenges.”

Bott says other states with Amish businesses don’t allow ice houses, though the Department is open to Secich keeping his if they can determine it’s safe.

Additionally, there is a federal requirement to create something called a Hazard Analysis Critical Control Point plan, described as demanding “mountains of paperwork” by one non-Amish business owner.

According to the Bangor Daily News, Secich’s issues arose in part to due to the media coverage, which also provided a significant boost to his business. Secich doesn’t sound optimistic:

“We’re thinking about closing because it’s just too much,” he said Monday afternoon. “We want to stay open. But we’re so overwhelmed at the vast amount of paperwork … it’s so immense, I can’t keep up with it.”

“I don’t have time to be checking the temperature every two hours and logging it,” he said. “It makes me very tired. It’s too much. The last thing I’m ever going to do is serve somebody something I wouldn’t stand beside. The last thing I’d do is jeopardize anybody in any shape or form.”

Secich’s story has relevance as Amish businesses have faced issues over compliance with health regulations.

Perhaps the most infamous have been the conflicts over raw milk sales, notably that of PA Amish farmer Dan Allgyer. Other examples include Amish baked goods sellers facing challenges. One example was mentioned by Kevin Williams in a recent video on an Ohio Amish bakery.

Despite the obstacles, Bott is described as “confident the Department can come up with creative solutions to help Charcuterie in Unity keep selling sausage and other meats.”