Last week we learned the tragic story of Jonathan and Wilma Hochstetler, a Mennonite couple shot in a late-night robbery in Indianapolis, with Wilma losing her life. Jonathan happens to be a cousin to Amish Cook columnist Gloria Yoder – the oldest cousin of 47 on her father’s side, as she describes him. In this week’s column, Gloria gives more details on the shooting, Jonathan’s condition, and Wilma’s funeral. 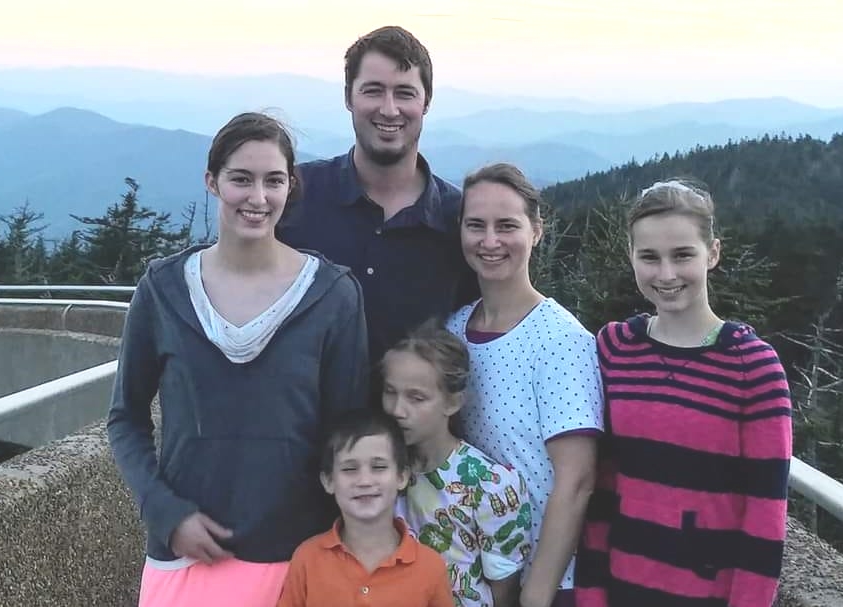 As the day wore on, we gathered bits of information. Along with their 6-year-old son, Jonathan and his wife were in Indianapolis, working on fixing trailer lights across the street from a filling station when two armed men stepped up and asked for their money, which Jonathan handed over.

According to surveillance cameras nearby, the robbers each shot at the couple, as Jonathan and Wilma raised their hands in surrender. Wilma was instantly killed. Jonathan recalls crying out to God to at least spare one of them for the sake of their four children.

Young Braden later reported that he jumped out of the truck after the shooting and went over to Mom, asking if she was OK; when she could not respond, he tried to get Dad to respond, who was only semi-conscious. After about 20 minutes, with great efforts due to his injuries and blood loss, Jonathan made his way to the pickup and asked little Braden to give him the phone and dialed 911 to ask for help.

Jonathan reports having called the police, but according to his phone, there never was an actual phone call made. Did God make that connection when Jonathan was physically not able to make the simple call?

Now today, eight days later, Jonathan came home from the hospital. He suffered various neck injuries, including three fractured vertebrae, which they fused. Despite it all, he seems to be healing faster than the doctor expected him to, for which we praise God. Tomorrow and the day after will be visitation and funeral for Wilma. 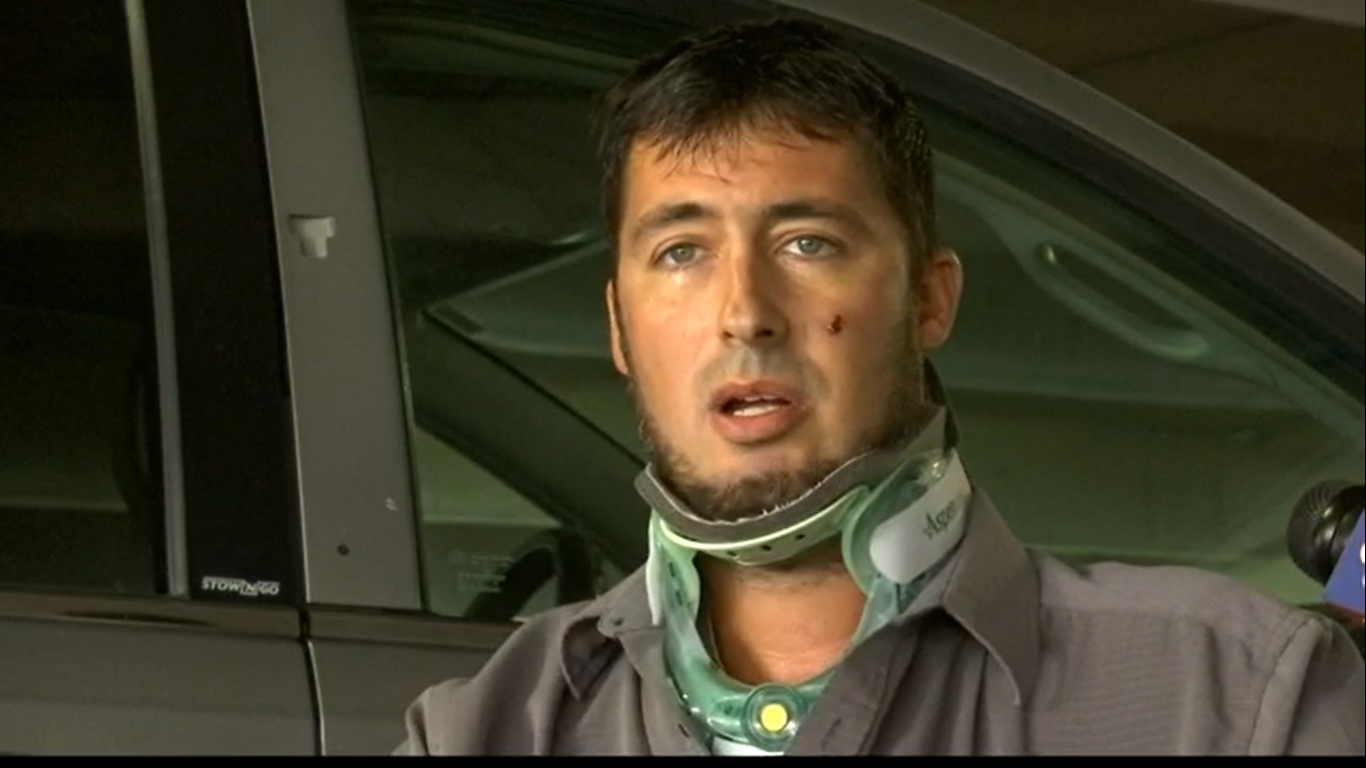 My constant cry to God is that He can do his profound work in each of our hearts during this traumatic time. Only God can heal broken hearts, and although Jonathan is completely crushed and devastated, he does not hold it against the robbers for shooting his wife.

Jonathan has forgiven them, which must truly be only because of the power of Jesus! His heartfelt longing is not for them to receive a harsh punishment, but that they can fall before the Lord in repentance and be saved. His testimony of having forgiven those who killed the love of his life, challenges me to love and forgive, no matter what.

OK, this is Saturday afternoon now. We just got back from the funeral. In the funeral sermon we were challenged to deeply search our hearts and our willingness to completely follow what is taught in the Bible, so that when our life on earth has ended, that our soul can be Jesus, forever free and at rest.

There were 1,100 people attending the funeral. It was saddening to see those dear young girls, ages 9, 12, and 16, and young Braden with no mother. My heart felt crushed anew as I looked at a picture they had posted of Jonathan and Wilma at a little table enjoying a date together. Never again will it happen.

The funeral, which was held September 26th, was made available online. You can view it here:

And this from Gloria:

Family, friends — all are in shock — yet God is undeniably bigger than it all. God certainly does not ask us to understand it all, yet we see the trace of his hand through it all.

The column in full.

WTHR also reports on the story, with comments from Jonathan after being released from the hospital last week.

“It grazed my spine,” Jonathan said, sitting in a wheelchair and wearing a neck brace after being discharged from the hospital. “I should be paralyzed. I should be dead. I believe it’s a miracle, a miracle from God. I just thank God for that.”

Jonathan and Wilma Hochstetler were working on a broken-down trailer a week ago at a roofing jobsite at 37th Street and High School Road on the west side of Indianapolis when they were robbed by two men with guns.

“Next thing that I know, my wife is falling beside me,” Jonathan said, his voice trembling.

He believes he could identify at least one of the shooters. The family says the incident was captured on video by a security video. Indianapolis Metropolitan Police have released no suspect information.

“Not that them being jailed or in prison for a long time is going to change anything for me or Wilma or my family, but they’re going to do this again,” Jonathan said.

Jonathan left Eskenazi one week after he was shot. He underwent surgery to fuse three vertebrae in his neck. Another surgery repaired his jaw and mouth. He was on a feeding tube for several days but now can swallow soft foods. Doctors expect a full recovery.

Jonathan is going home to Bloomfield just in time for his wife’s funeral.

“I took her for granted way too many times,” Jonathan said. “She was a wonderful wife. She was an amazing soulmate.”

Now, the family is offering a reward of $50,000 for “information leading to the arrest and prosecution of the perpetrator or perpetrators in the murder of Wilma Hochstetler.”

For more details on the reward and updates from the family, visit their Facebook page.

If you have information to report, call the Indianapolis Homicide Division at 317-327-3475. To report information anonymously, contact Crime Stoppers at 317-262-TIPS. 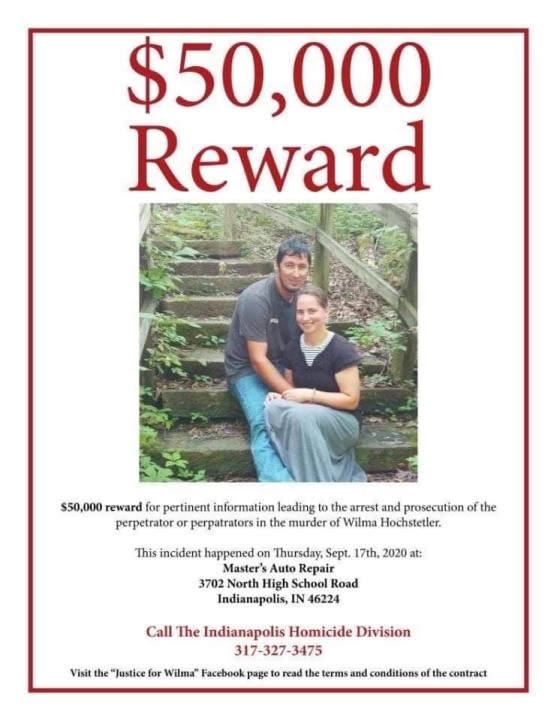 Finally, Jonathan’s father Sam had these comments for the Indianapolis Star, on his 6-year-old grandson who witnessed the shooting:

“He said ‘I wish they didn’t shoot my mommy’ as soon as he got home,” Sam Hochstetler said. “(But I think) he is still oblivious to what happened.”

“My heart just burns for my son,” Sam Hochstetler said. “He got shot, and he knows his wife is dead.”