Fracking is slowly entering the Amish community at New Wilmington, Pennsylvania, located an hour north of Pittsburgh. The community lies above the Marcellus Shale, an underground rock formation stretching across a half-dozen states which contains vast supplies of natural gas.

Fracking, in a nutshell, works by drilling into rock formations, and then injecting large amounts of water mixed with chemicals and sand to fracture the rock and free trapped natural gas, petroleum and other resources. 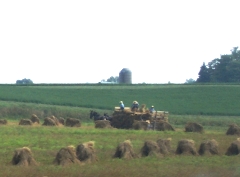 Amish in the New Wilmington, PA community must face the fracking question

A recent article looks at the effects of fracking on the Amish and other New Wilmington-area residents.  For those with land, fracking has brought a lot of money.  Companies in the area are paying up to $3,500 per acre for mineral rights (I have heard numbers significantly exceeding that elsewhere).

Those who don’t own land benefit from the fracking industry as well. When I visited the Holmes County, Ohio Amish community this summer, I found the New Philadelphia/Dover area (two sizeable “twin” towns lying about 15 minutes east of the Holmes settlement) was experiencing a mini-boom.

Rental prices had increased significantly with an influx of out-of-staters into the area.  Energy company people could be found camped out at the county courthouse with laptops scouring for potential acquisitions.  An acquaintance in town spoke of the uptick in business for his renovation business, a welcome boost he attributed to the energy money.  New Philadelphia is a place whose best years were probably already behind it, at least before this boom happened.

What’s so bad about fracking?

Fracking is a newer battleground where public opinion is still being shaped.  It has gradually entered mass consciousness, with a Hollywood fracking film now playing on cinema screens. Some see fracking as a godsend, a way to unleash untapped resources and bring wealth to struggling communities.  For others the impact on quality of life and the environment are too great a price to pay.

By the way some describe it, I think I would hate the entire process of fracking.  With the heavy road traffic, bright lights at night, and constant noise, it seems like a hellish process specially designed to drive me crazy (I am a bit noise-sensitive, and don’t sleep terribly well to begin with).  However if I knew it were a matter of weeks or months, I think I could survive the process itself.

What complicates this discussion is the fact that one person’s use of personal property affects others in the vicinity.  My neighbor generally has the freedom to do what he would like with his property, but his choices could severely damage my quality of life as well as the value of my own property.  The neighbor with the junk heaps in the front yard is one example of this.  Some anti-fracking residents are trying to do the only thing they can, convince others to not sign away rights.  But if you live in a fracking area, it may be out of your hands.

Some Amish in New Wilmington have signed up for fracking, leasing their mineral rights to energy companies.  In some sense fracking seems specially designed to undermine the Amish way of life.  First there is the disturbance to rural peace.  In the article I linked to, an Amish woman named Lydia Mullet says this about the drilling on her next-door-neighbor’s property: “I’m depressed about it, but we feel helpless because it’s not on our land. And the lights shine through our windows at night. It’s not relaxing.”  Traffic can mean hundreds of trucks per day servicing a site. There are concerns over groundwater contamination. 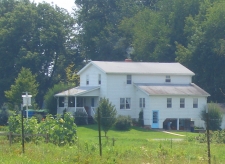 Fracking is a potential threat to rural Amish life

A more potentially dangerous disturbance is that done by easy wealth.  An Amish man quoted in the story has this to say: “This friction is caused by greed. Scripture says that at the end of times, it will take over. I could have been engulfed in it, too: we all like to make money. But I was taught at home that money not worked for” — money from leasing, that is — “is no good.”  (As an aside, I wonder if people who take this stance have ever sold land for profit, beyond inflation and whatever value they added by improving it…hmm).

There is a lot of money to be made easily, but as this Amishman worries, at a potentially high price.  We don’t have to listen to Amish warnings to fear this type of thing. Cautionary tales abound of money gained too quickly, such as stories you often hear of lottery winners who five years later are broke, addicted, and without friends or family.

Fracking is easy to paint as evil.  It seems dirty and unnatural, unlike good-PR-enjoying wind or solar. Its very name sounds disturbing.  Anytime there is a big company on one side and hapless citizens on the other (how many movies have leaned on that dynamic), it’s not hard to see which side is going to be portrayed as evil if something goes wrong.  This doesn’t relieve big companies of blame though, and if you read the story there have been cases of unscrupulous behavior on the part of land agents, for example.

Still, the “easy” money is attractive, especially if you’re in a struggling Rust Belt town.  If everyone else in your neighborhood is doing the same, the noise and traffic almost becomes a moot point–you’re going to deal with it anyway. And a windfall of money doesn’t automatically lead to depravity and sin (free will and personal responsibility enter the picture here). On the contrary a lot of good could be done.

If you owned land in a fracking zone, would you lease your mineral rights?  I’d like to say I wouldn’t, but if I’m being honest, under certain circumstances I’d probably be tempted.

Also, we seem to hear mostly about the bad sides of fracking.  Have you heard any positive stories?

There are motivated forces on both sides of this debate–money and big industry on one, concerned and vocal citizens on the other–and anytime there are loud voices it can be hard to get a good sense of what the reality actually is, at least not until the dust settles.